For they have shed the blood of saints and prophets, and thou hast given them blood to drink; for they are worthy. (7) And I heard another out of the altar say, Even so, Lord God Almighty, true and righteous are thy judgments. 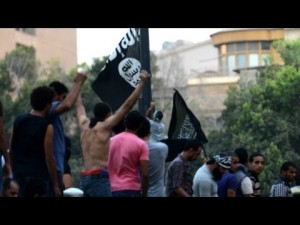 Islamic Black Flag of Jihad over US Embassy in Cairo

I want everyone to see this video.

It is about Muslims in front of the United States Embassy in Cairo, Egypt.

This is what Christians all over the world face from the Muslims.

Notice at the end how he ties the Jews into this.

The are moving to destroy both the Christians and Jews! This is Psalm 83 coming into focus.