For anyone first reading the Health and Nutrition Update, please read this first: Your Health.

Also, please go to God’s Health System and subscribe to receive the updates.

Always remember that you are in charge of your health and not the doctors. Do not put your life in their hands without first seeking God and His health system.

The goal of this blog now is to build up your health and especially the immune system to withstand the coming pestilences that are now rampant in America and the world. God gave the knowledge to prepare for pestilences, so take advantage of this information. The focus is posting articles with great information that can immediately help your health and quality of life.

Do Pomegranates Contain the Fountain of Youth?

There are 12 new articles and 2 videos posted; three articles and two videos have links and descriptions below. 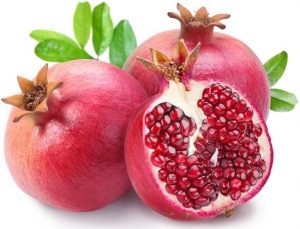 The fountain of youth?

Pomegranate finally reveals its powerful anti-aging secret Pomegranates have a special significance in Scripture. Could the reason for this be that they are near-perfect food and promote health like no other fruit? “Exodus 28:33-34 states that images of pomegranates be woven into the hem… [of the] robe worn by the Hebrew High Priest.

Pomegranates can also be found in the Bible in 1 Kings 7:13-22, where the fruit is depicted on the capitals of the two pillars which stood in front of the temple King Solomon built in Jerusalem. King Solomon is said to have designed his crown based on the…pomegranate. The significance of the Jewish pomegranate is further exemplified by its appearance on ancient coins of Judea, one of only a few images that appear as a holy symbol.

Jewish tradition teaches that the pomegranate is a symbol of righteousness because it is said to have 613 seeds, which corresponds with the 613 mitzvot, or commandments, of the Torah. For this reason and others, it is customary to eat pomegranates on Rosh Hashanah. Moreover, the pomegranate represents fruitfulness, knowledge, learning, and wisdom.”

“Are pomegranates really the superfood that will counteract aging? Scientists have discovered that a molecule in pomegranates, transformed by microbes in the gut, enables muscle cells to protect themselves against one of the major causes of aging. In animals, the effect is nothing short of amazing. Clinical trials are underway…

As we age, our cells increasingly struggle to recycle their powerhouses. Called mitochondria, these inner compartments are no longer able to carry out their vital function, thus accumulate in the cell. This degradation affects the health of many tissues, including muscles, which gradually weaken over the years. A buildup of dysfunctional mitochondria is also suspected of playing a role in other diseases of aging, such as Parkinson’s disease.

One molecule plays David against the Goliath of aging

The scientists identified a molecule that, all by itself, managed to re-establish the cell’s ability to recycle the components of the defective mitochondria: urolithin A. “It’s the only known molecule that can relaunch the mitochondrial clean-up process, otherwise known as mitophagy,” says Patrick Aebischer, co-author on the study. “It’s a completely natural substance, and its effect is powerful and measurable.”

How to Cut and De-Seed a Pomegranate  The video above is the most common way to de-seed a pomegranate, but it can get messy. The video immediately below shows a very skilled, clean way to do it and though the presenter makes it look easy, it probably takes a great deal of practice to do it so smoothly. But if you love pomegranates and eat them frequently, you may want to try it.

Late October, early November is the season for pomegranates, pinkish red orbs filled with crunchy, juicy seeds (known as arils), bursting with flavor. You can get them at most supermarkets, but if you live anywhere near where they are grown, it’s best to get them at a local farmer’s market. Here you are most likely to find the ripest pomegranates – the ones whose peels are beginning to crack open, their plump, ripe seeds expanding beyond the peel’s ability to contain them…

Some people cut them in half through the middle and use a wooden spoon to whack the arils out of the pomegranate. We have never found this method particularly effective with our pomegranates. It can be rather messy, and ends up bruising a lot of the seeds, especially if they are ripe and juicy. What follows is the method that we’ve settled upon, which, if done well, results in not one broken seed, and takes hardly anytime at all…

Pomegranate juice stains. So before you begin to cut into one, make sure you are wearing something that you don’t care too much about, like an old t-shirt. The juice will stain a wood cutting board (you can use vinegar or lemon juice to get the pink out) so you may want to cut on a plastic cutting board. Work close to the sink, making cuts and then moving the pomegranate over a large bowl to open. 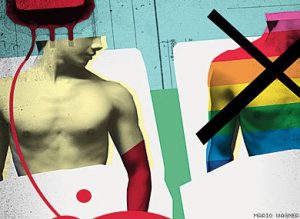 “Less than a year ago, the Food and Drug Administration (FDA) did away with an important public health measure to protect the safety of our blood supply — namely, the lifetime deferral of men who have had sex with men (MSM) as blood donors. This longstanding policy was a sensible precaution based on the extraordinarily high rates of HIV infection among MSM. The FDA replaced it with a deferral only of men who had sex with men in the past year.

Now, even that precaution is under attack — and the FDA has invited comments on the possibility of doing away with the deferral of MSM as blood donors altogether, and replacing the question about sexual partners with ones about specific high-risk behaviors.

Why the sudden change? It is being driven by an emotional response to the mass shooting at a gay nightclub in Orlando in June. In the immediate aftermath of the shooting, people were told that one practical thing they could do to help the (surviving) victims was to donate blood — whereupon some men who engage in homosexual relationships were reminded that they were still rejected as donors. Rep. Jared Polis, a Democrat from Colorado who identifies as gay, has led the charge to do away with the deferral altogether.

Note that this has nothing to do with any shortage of blood. News coverage from the day of the shooting shows that while a story went out late that morning asking for blood donations, within hours medical facilities were saying they had enough and could not handle any more donors.