As America and the World Have Done To Israel

As America and the World Have Done to Israel

Buy The Book: As America Has Done To Israel

I posted about the awesome outbreak of earthquakes on April 11, along with the devastating weather the hitting the US. This all happened on the very day the Middle East Quartet announced that the “peace process” between Israel and the Palestinians needed to be completed by the end of 2012.

“The so-called Quartet – the European Union, Russia, the United Nations and the United States – said they stood behind their September 23, 2011, call for the parties to reach a peace deal by the end of 2012, an objective that seems increasingly remote”. (Watch them place enormous pressure on Israel towards the end of the year.)

I want to add to the original posting as incredible information has just come out about powerful and awesome were the earthquakes in April 11. The 8.6 quake off the coast of Indonesia was the largest slip fault break in recorded history. The quakes this big have always been subduction breaks when on plate slips under the other. This 8.6 earthquake was when the faults side past each other.
If the Quartet does pressure Israel towards the end of 2012, this would match the time frame for the Mayan calendar and the belief by many this might be the end of the world. The reason this becomes important is based on what happened on April 11, the God of Israel might be sending massive disasters at the end of 2012. Many might think this is the end of the world and be greatly deceived. This is all speculation on my part, but I am just looking at what just happened and what might happen if the Quartet tries to bully Israel toward the end of 2012. This is something to watch.
On April 11, Hillary Clinton also said that she was going to overrule Congress and release $147 million in funds to the Palestinians. Again, this happened while incredible tornado storms were unleashed on huge sections of the US along with the massive earthquakes!
Clinton Overrules Republican Lawmaker’s Hold on Palestinian Aid 04/11/12 “A State Department official said that a letter was delivered on Tuesday to key members of Congress informing them of Clinton’s decision to move forward with the $147 million package of the fiscal year 2011 economic support funds for the Palestinian people, despite Ros-Lehtinen’s hold. Administrations generally do not disburse funding over the objections of lawmakers on relevant committees.”
Storm center logs nearly 100 reports of tornadoes in Kansas 04/15/12 There is now no stopping of these massive storms!
Earthquake Update
In the week following April 11, I found incredible information about this earthquake outbreak on April 11. This needs to be added to the original posting, so you can see the big picture of what happened. April 11, 2012 is going to be an earthquake day to be remembered. It seems on this day the earth entered into a new level of earthquake power and activity.
April 11: Earthquakes a day to remember 04/12/12 (Video) The first section is about weather while the second part shows all the earthquakes.
Indonesia quake a record, risks for Aceh grow 04/12/12 This is the earth entering travail as the Day of the LORD draws near. Notice how rare and powerful was this event!
“The powerful undersea earthquake off the Indonesian island of Sumatra this week was a once in 2,000 years event, and although it resulted in only a few deaths, it increases the risks of a killer quake in the region, a leading seismologist said. Wednesday’s 8.6 magnitude quake and a powerful aftershock were “strike-slip” quakes and the largest of that type recorded, Kerry Sieh, director of the Earth Observatory of Singapore, told Reuters. “It’s a really an exceptionally large and rare event,” (Do not forget this occurred on April 11)
Did N. Sumatra earthquakes set off a chain-reaction? Planet shaken by shocking number of tremors since April 11, 2012 04/17/12 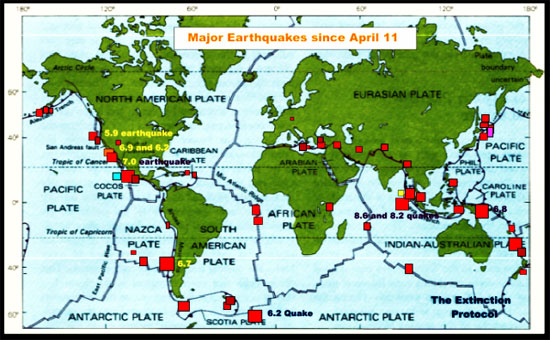 Major Earthquakes since April 11, 2012 around the world

“The shocking number of earthquakes that have rattled the globe, especially along tectonic plate boundaries, since the double 8.0+ magnitude earthquakes struck off the coast of Northern Sumatra on April 11 could be early indication the planet may be shifting towards a new catastrophic model. Romania’ s top seismologist, Gheorghe Marmureanu, told the Bucharest Herald: “There is no doubt something is seriously wrong. There have been too many strong earthquakes.” I said in my book: “ If you keep seismically shaking the Earth, like a bottle of soda, its structural integrity eventually will become compromised and it will start to fracture like an egg. In this case, the fracturing will be thermal dissipation by hyper-volcanism, mega-thrust earthquakes, and greater tectonic boundary plate agitation around volcanic arcs and subduction zones…if this is what’s indeed happening, the pressure will continue to build in the interior of the planet until it eventually destabilizes all tectonic plates in a spectral pattern of continuous seismic oscillation. Every earthquake generates and emits enough kinetic energy through the earth to potentially trigger more seismic disturbances.”

On April 11, 2012, it seems like the world crossed “a line in the sand” with the God of Israel. The Quartet, just stating it wanted to get the meetings started, coincided with this worldwide  outbreak of earthquakes that had the earth ringing like a bell. With the power and numbers of the earthquakes, it seems the world was put on notice! The world was taken to a higher level of judgment, and it is hard to imagine what the next round of judgments will bring.  The world is rushing towards the Day of the LORD and the Second Coming of Jesus Christ with His church.