I have just posted on my blog about the link about Gay Pride Month promoted by the president and the massive fires in Colorado, along with the massive flooding in Florida. I looked and looked for a link for what America was doing to Israel. I did not see any link at all but only the link to homosexuality.

It appears that America now is right in God’s face with its sin and rebellion. This rebellion has God’s attention, and He is in the process of destroying the nation as I am writing this article. Once again, this huge battle is taking place over the fate of America and the VAST majority of the church is clueless. They lost the fear of God, led by the pastors and church leaders. 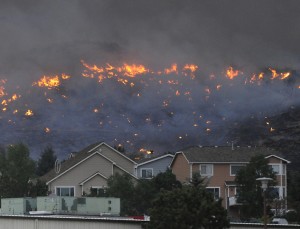 Obama congratulates Morsi on winning Egyptian presidency 06/24/12 There is not one word about Morsi and the Muslim Brotherhood and the formation of a caliphate with Jerusalem as its capital!

“Mr. Obama “underscored that the United States will continue to support Egypt’s transition to democracy and stand by the Egyptian people as they fulfill the promise of their revolution,” the White House said in a readout of the call. “He emphasized his interest in working together with President-elect Morsi, on the basis of mutual respect, to advance the many shared interests between Egypt and the United States,”

“Firefighters struggled on Wednesday to beat back a wildfire raging at the edge of Colorado Springs that doubled in size overnight, forced more than 32,000 people from their homes and was nipping at the edges of the U.S. Air Force Academy.”

Jerusalem to become Egypt’s capital under Mursi’s rule, says Muslim cleric 06/07/12 (Video) Everyone needs to watch this video and you will get an idea why America is in trouble with God! This is what Obama and Clinton are praising and supporting as a victory for democracy! They know full well what Morsi stands for. No wonder America is burning with fires throughout the West!

This is a political rally for Morsi who is sitting right behind the speaker cleric Safwat Hagazy. I see this as a declaration of war against Israel as they are openly calling for killing the Jews and taking Jerusalem! With rallies like this, the war cannot be far off. It reminded me of the huge rallies that Nazis held.

“Tomorrow Mursi will liberate Gaza,” the crowds chanted. “Yes, we will either pray in Jerusalem or we will be martyred there,” Hegazy said.

I see the statement by Hegazy that “Yes, we will either pray in Jerusalem or we will be martyred there,” as being prophetic because they will all die there. Egypt does not survive the war and all that survive must flee Egypt into the world. Egypt is totally destroyed.

“Without relating to the Muslim Brotherhood, spokesmen for the U.S. State Department and the Pentagon decided to press the Egyptian Army to relinquish the governing role it is seeking to carve out for itself. But what if Morsi is declared the victor? Wouldn’t it make more sense to allow the balance of powers between these institutions to evolve by themselves, with no external involvement? For decades, the Turkish Armed Forces were the guardians of Ataturk’s legacy in Turkey, until the rise of Erdogan.

Nevertheless, according to the Los Angeles Times, U.S. officials said on Monday that they were “deeply concerned by an Egyptian military decree giving the generals sweeping powers to pass laws and decide whether to go to war.” This was a stunning statement, considering that the Muslim Brotherhood might still emerge as the winner. Right now, given the ideology of the Muslim Brotherhood and its ties to its Palestinian branch, Hamas, leaving Egypt’s war-making powers with the Egyptian military is far safer for the world than transferring them to a Muslim Brotherhood government.”

US Pressuring Generals to Hand Power to Brotherhood 06/23/21 Obama is the man in place to see that the Muslim caliphate is in place only to be destroyed by the God of Israel. He has no idea of this, but he is being used that the prophetic word of God will be fulfilled. He is setting up Israel to be destroyed by the forming Islamic caliphate while America is burning. God is going to overrule these evil plans of the Hard Left and Muslims against Israel.

“The liberal parties accused the United States of putting pressure on the ruling military council to hand power to the Brotherhood. On Wednesday, U.S. Secretary of State Hillary Rodham Clinton demanded that the military “support the democratic transition, to recede by turning over authority.”

Colorado in Crisis: Wildfires in “Catastrophic Fury” Devastate City 06/27/12 Please review this as it has great information and pictures.