Revelation 9:20,21 And the rest of the men which were not killed by these plagues yet repented not of the works of their hands, that they should not worship devils, and idols of gold, and silver, and brass, and stone, and of wood: which neither can see, nor hear, nor walk: Neither repented they of their murders, nor of their sorceries, nor of their fornication, nor of their thefts.

I had a wonderful time at the conference at Messiah College. It was surprising to meet so many people who had read my book As America Has Done to Israel. The book had a huge impact with the people which made me very happy.

I posted the above verses as they show, that no matter what God does to warn people of judgment, few will turn from false religion and sin. This is being played out now right before our eyes. What is so very sad in this is that many of God’s people are not able to make the connection between the disasters and sin. They are as blind as the world.

Getting back to the news, once again it is overwhelming as so many issues are coming to a head. The economies of Europe and America are still accelerating towards the final meltdown. The heatwave and drought are destroying huge sections of America’s cropland. This could be the worst year ever and start America and the world into a massive famine.

I did not post about Israel, but the war is ever so much closer. Syria is turning out to be just like the Spanish war before WW2. The formation of the Islamic caliphate is full speed ahead. I will post on all that tomorrow.

Please continue to grow closer to the Lord Jesus and stay focused on His coming for His church. If the Lord does not return soon for the church, we are going to see incredible events with great destruction and loss of life. All these issues are coming together at the same time. I much rather be with the Lord Jesus than watch what is coming upon the earth. The Marriage Supper of the Lamb sounds very good me at the moment.

May the LORD God of Israel bless and protect you.

US Presbyterians reject Israel divestment 07/06/12 At first this sounds wonderful until you realize that the vote was 333-331! Within this mainline denomination the Hard Left is ready to take control.

“By a razor-thin margin, the largest Presbyterian group in the United States rejected a proposal Thursday to divest from three companies that do business with Israel. Pro-Palestinian advocates vowed to try again. The Presbyterian General Assembly voted 333-331, with two abstentions, to reject the divestment plan.”

Clinton: Resolving Israel-Palestinian conflict still important 07/07/12 Israel is now on the sidelines as the Muslim Brotherhood is building the caliphate. Obama is not really bothering Israel right now as he is too busy helping to build the Islamic caliphate whose object is to destroy Israel.

“U.S. Secretary of State Hillary Clinton told Palestinian President Mahmoud Abbas on Friday the Israel-Palestinian conflict should not be forgotten amid wider upheaval in the Middle East. Washington has made no visible progress toward its goal of reaching an outline peace deal by the end of this year and both sides appear unlikely to make any significant steps toward peace ahead of the U.S. election in November.”

Obama invites Egypt’s Islamist leader to U.S. 07/08/12 Batten down the hatches in September when Morsi visits America. This is the man that wants to destroy Israel and was helped to power by Obama.

Continental U.S. breaks heat record in first half of 2012 07/09/12 The destruction of America continues as Clinton still pursues the dividing of Israel. The combination of the pressuring Israel and the homosexual agenda has now brought the wrath of God on the nation.

Presbyterians reject redefinition of marriage 07/07/12 At first the headlines look good until you realize just how close the vote was. The combination of the homosexual agenda and anti Israel sentiment in this denomination has it doomed.

“The Presbyterian Church (U.S.A.) narrowly rejected a proposal to revise the traditional definition of marriage on Friday, a year after it struck down a barrier to ordaining gays. The Presbyterian General Assembly, meeting in Pittsburgh, voted 338-308 against changing how marriage was defined in the church constitution from a “civil contract between a woman and a man” to a “covenant between two people.” The assembly also rejected measures that would have affirmed a traditional definition of marriage or sought more theological study of the issue.”

Congressman Barney Frank weds in same-sex marriage 07/07/12 What a disgrace to the Congress and the nation of America. To think the people of Massachusetts actually elected him many times knowing that he was an open sodomite shows just how far America has slid towards Sodom. There is no political hope with this mentality in the nation.

Episcopal Church Votes to Allow Transgender Ministers 07/08/12 No wonder that America is burning up and facing a crop destroying drought. What a sad joke this denomination has become. Please in the following quote the connection between the meltdown of this denomination and the promotion of sodomites into the pulpit!

“A day after a legislative body of the Episcopal Church voted to sell the denomination’s New York headquarters amid budget cuts and declining membership, church leaders on Saturday adopted legislation to give transgenders the right to become lay and ordained ministers.”

Roubini: My ‘Perfect Storm’ Scenario Is Unfolding Now 07/09/12 Pay close attention to what this man says. He predicted the crash of 2008 and has a very clear mind to foresee the economic future. He now says that the final collapse of the world economy is in motion for later this year and into 2013. Remember, later this year and all the predictions of the end of the world! It appears that the economy is now falling in line with this which will help deceive people into thinking it is Armageddon and the end of the world.

“Dr. Doom” Nouriel Roubini says the “perfect storm” scenario he forecast for the global economy earlier this year is unfolding right now as growth slows in the U.S., Europe as well as China.  In May, Roubini predicted four elements – stalling growth in the U.S., debt troubles in Europe, a slowdown in emerging markets, particularly China, and military conflict in Iran – would come together to create a storm for the global economy in 2013.”

French president: zero growth so far this year 07/09/12 This shows just how desperate the Europeans have become as the French bonds have negative interest!!! They are buying them for protection.

“France’s government sold (EURO)6 billlion in short-term bonds at negative interest rates Monday, as investors flock to the perceived safety of Europe’s larger economies. It was the first time rates entered negative territory, according to the French Treasury.”

Spanish Yields Above 7% Show Summit Shortfall 07/09/12 This is a crisis mode level of interest. This is what sent Greece into an economic black hole. Spain is in big economic trouble.

Scranton, PA workers to take mayor to court over across-the-board minimum wage 07/09/12 Yet, another US city going bankrupt. I will report them as they fail. The number is growing.

In Maryland, Higher Taxes Chase Out Rich: Study 07/09/12 This is all part of the economic destruction of high taxed states. Why live in a state like Maryland when you can move to a less taxed state and save large amounts of money. This is going to happen in France when the 75 percent tax rate takes effect. The rich must be fleeing California in large numbers. 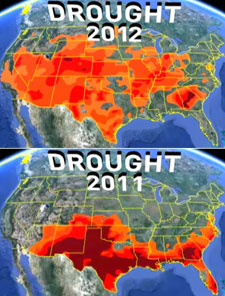 There is overwhelming information now about the destruction of the nation’s food supply. The drought and heat are destroying vast areas of the US farmlands. It has gone past the point of no return for much of the crops. Last year was bad, but this year is far worse. It appears that the LORD is in the process of destroying the food supply. Please remember that the heat and drought can be traced to June 2012 and this month officially being designated as “homosexual month.” As the church refuses to repent and cry out to God, it now appears that America is beyond the point of no return as a curse has settled over the nation and the food and water are being destroyed.

Notice in the map how about 75 percent of America is under drought! The LORD’S destruction of America is now at full throttle. The following four articles are but a few of the headlines about the drought in America.

Continental U.S. breaks heat record in first half of 2012 07/09/12 This heat is now combined with the drought.

Are we safe from the sun? Solar flares keep on getting stronger 07/09/12

Firefighters Battle Large Blaze in Idaho 07/08/12 The fires are still raging in the West.