Joel 3: 9,10 Proclaim ye this among the Gentiles; Prepare war, wake up the mighty men, let all the men of war draw near; let them come up: Beat your plowshares into swords, and your pruninghooks into spears: let the weak say, I am strong. 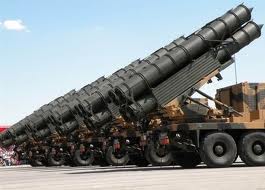 Syrian Missile Battery That Could be Launched Against Israel

The time for the all-out war is ever so close. Israel is now openly talking of attacking Syria to locate and destroy the Syrian WMDs. When Israel openly talks like this, it is not a bluff and the war is very close. Assad stated that Syria will use the weapons on any nation that attacks! Israel cannot let these weapons fall into the hands of Hezbollah or the Muslim Brotherhood. Israel has a very successful history of surprise attacks. Israel issued the warning so the attack could be any day now.

Wow is this situation ever so tense. If Israel attacks Syria, Iran might see this as the opportunity to attack Israel which would ignite the all-out war. There are many ways this could play out, but whatever happens, according to the Bible,Syria is doomed and will disappear from history.

Israel in tough warning over Syria weapons cache 07/22/12 Syria was warned by Israel. The war is very, very close.

Syria Says Chemical Arms Reserved for Attack From Abroad  07/23/12 I have no doubt that Assad will launch the missiles against Israel.

The all-out war could break out at any time now. Grow closer to the Lord Jesus each day. This is the most important thing you can do because when this war breaks out the world you have known is coming to an end. Fear and terror will grip the world as the Middle East war will spread across the earth. NOW is the time to seek the Lord Jesus and His will. He is the anchor for your soul.

I have started a Tuesday evening prayer group called “They that feared the LORD”. We will call on the Lord to help us in this hour plus an outpouring of His Holy Spirit and many other issues. Please join us because it is now or never.

Joel 3:16 The LORD also shall roar out of Zion, and utter his voice from Jerusalem; and the heavens and the earth shall shake: but the LORD will be the hope of his people, and the strength of the children of Israel.

Mofaz hints at Netanyahu plan to attack Iran 07/22/12 It looks the time of the attack is set for this September-October. Once this war starts, the world will then rush towards the coming of the antichrist and Armageddon.

“The conclusion drawn in the Channel 2 report was that Netanyahu needed to be certain he would have a cabinet majority for an attack on Iran in the September-October period.”

Two hours for Syrian chemical weapons to reach Lebanon. Four armies prepared 07/22/12 Again, this situation is so tense. These armies are ready to move quickly while Assad states that he will use these weapons against any attackers.

“The IDF, the Turkish and Jordanian armies and US Middle East forces have switched to preparedness mode in the last few hours in case the Syrian chemical weapons arsenal starts moving west toward Lebanon,”

Syrian rebels say fight for country’s largest city has begun 07/22/12 The rebels are on the offensive while the Syrian army appears to be beaten.

Report: Islamic Jihad leadership leaves Syria 07/21/12 This is yet another sign that Assad has lost control of Syria.

Syrian Muslim Brotherhood to launch political party 07/20/12 This is to create the caliphate and a jihad against Israel.

Gloating Ahmadinejad hints at Iranian responsibility for Burgas terror attack 07/20/12 Israel always hits back on terror attacks like this. It is just a matter of time; however, as tense as the Middle East is right now the attack could trigger the all-out war.

Al Qaeda chief vows comeback in Iraq 07/22/12 I have been saying for a long time that Iraq was going to be taken over by terrorists and would be part of the all-out war against Israel. Iraq is going to be totally destroyed and never to be rebuilt. It will cease to exist.

Luke 21:28 And when these things begin to come to pass, then look up, and lift up your heads; for your redemption draweth nigh.