Ezekiel 38:8 After many days thou shalt be visited: in the latter years thou shalt come into the land that is brought back from the sword, and is gathered out of many people, against the mountains of Israel, which have been always waste: but it is brought forth out of the nations, and they shall dwell safely all of them.

I was traveling but now back home. I will report tomorrow about spiritual insights from traveling.

The tension continues to build over Syria as both Russia and Iran are standing their ground to protect Syria. This looks more like the Spanish Civil War of the 1936 each day. 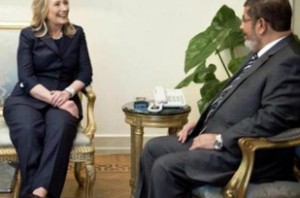 Clinton meeting with Morsi to help promote the Muslim Brotherhood

“At 4 a.m. on June 18, only six hours after polls closed and well before an initial count had been completed, the Muslim Brotherhood’s Mohammed Morsi held a press conference and declared himself the winner of Egypt’s presidential election. It took nearly a week for election officials to confirm that. When they did, U.S. President Obama called Mr. Morsi the same night to congratulate him. In the interim, the Muslim Brotherhood had established the psychological fact of “President Morsi” on the ground, letting its announcement sink into the Egyptian and international psyche. By the time the official results were in, any other outcome would have seemed fraudulent.”

Many Egyptians were also shocked by Secretary of State Hillary Clinton’s call for the Supreme Council of Armed Forces to return to their barracks. In June, after the polls closed and Mr. Morsi had declared himself the winner—but before the official results had been announced—Mrs. Clinton said “it is imperative that the military fulfill its promise to the Egyptian people to turn power over to the legitimate winner.”

Obama and the Islamic caliphate will never be able to destroy Israel. The Holy God of Israel is going to be glorified by Israel surviving and thus showing the authority of God’s word through the everlasting covenant God made with Abraham, Isaac and Jacob. Islam is about to realize the authority of the Bible and it will be the hard way when they try and destroy Israel and take Jerusalem.

The following articles are all very important to show you what is happening. Right now, Syria is the focus of attention as it could lead to a direct confrontation between the US and Iran or Russia. Israel will attack if the Syrian WMDs get into the hands of Hezbollah.

Analysis: Has time come for Egypt to retake Sinai? 08/06/12 In the end, the entire Sinai is going to be part of Israel.

‘Our Streets Are Islamic’: Sharia on the West Bank 08/06/12 This is all part of the Palestinians becoming part of the Islamic caliphate against Israel.

IDF foils assault on southern border after terrorists kill 16 Egyptian soldiers 08/06/12 The Islamists will never stop trying to kill Israelis until they are destroyed.

Kurdistan: Next Flashpoint between Iraq,Turkey, Syria 08/06/12 The Kurds are the descendants of the ancients Medes as mentioned in the book of Daniel.

Israel’s EMP Attack Can Send Iran Back to the Stone Age 08/06/12 This is really an informative article with lots of good information. Make sure that you take time to read it.

Damascus underscores Iran’s commitment to Assad  08/07/12 It sure looks like Iran is not going to let Assad fall from power. Iran might send its army into Syria to prop Assad up.

High Iranian official in Beirut for urgent talks with Hizballah on Syria, Israel 08/07/12