It happened again yesterday as I was hindered in posting the blog. The Internet was out in my area all day until late in the evening. This follows the inflammation of my left eye. The eye is much better as the pain is gone although part of it is still blood-red looking.

So much is happening that it is making my head spin. The world economy led by Europe is collapsing at a rapid rate. Once the downward spiral starts the massive amounts of debt is like a huge anchor that keeps pulling down no matter how hard the effort is made to get free. Debt is the death knell to the economy. God does not really have to do anything other than just let the debt destroy the nations that built it up! The weight of sin is destroying the world system. The economy reflects the moral climate of a nation. The advancement of the sodomite agenda, the massive killing of babies, the tremendous use of drugs, the rejection of God, the living for materialism and the massive debt all go together. A society that kills 55 million babies and “marries” homosexuals will go into $15+ trillion in debt! The debt and decadence all go together. They do fit together: debt and decadence.

Critical events are happening in Egypt, but I cannot get a handle on it. The Egyptian Supreme Court overturned the elections and now the nation has come under military rule! This needs to be watched as Egypt was slated to be ruled by the Muslim Brotherhood. This is a possible civil war in the making. It sure does look like massive bloodshed coming to Egypt. Egypt’s economy has collapsed so it is ripe for a revolution as people are going to starve. It is ironic that a few days after Mursi called for a caliphate to destroy Israel with Jerusalem as its capital that now Egypt is heading into turmoil and possibly massive bloodshed!

Obama is moving ahead to continue with the sodomizing of the military. The once mighty US military is now being destroyed before our eyes. I warned that this was coming. Already the reprobate chaplains have “married” lesbians. As the Hard Left agenda takes over the military this will get worse. The lust within the homosexuals will break out and it will create chaos within the ranks. This will not take long to happen and even now is happening under the radar. What really hurts me on this, is that the church handed the military over to the Hard Left without a fight or even as much as a whimper! The “church” left all the Christian military chaplains to face the Hard Left lions alone. Well I think very soon the pastors and church leaders are about to face those same lions all alone. The sodomites are very soon going to be at the doors of these powerless pastor’s churches and there will be no one to stand with them.

The Hard Left will never admit there is a problem. If they do, they will blame the real men and women for not accepting the sodomites in their midst. As the holy God of Israel turns America over to judgment, I have no doubt that a terrible military defeat is just over the horizon. God is removing all His blessings and protection from America. The nation does not want Him, but instead wants sodomy and the Hard Left. Remember, that the Americans voted the Hard Left into office. No one forced this agenda on the nation. God is just going to turn us over to our evil ways which is self-destruction. On top of all this the VAST amount of pastors and church leaders are dead to the Holy Spirit. They are unable to hear God’s voice or believe what is written in the Bible. The church is like a corporation even with their IRS 501-3c for their precious tax exemption. The American society is crashing down all around them and not a word about repentance or crying out to God. It is like we are living in a spiritual surrealistic world! The church is just as blind as the world and without excuse!

If the Lord Jesus tarries for His church, may the Holy God of Israel bless and protect you as you walk in the true and real fear of Him.

Europe on the brink as Greek crisis approaches climax 06/14/12 This headline says it all. I have said many times that Europe is following the same path of the 1930s and the Great Depression.

“This time Europe really is on the brink,” the influential intellectuals wrote in an article for Germany’s Der Spiegel news magazine, which considered the catastrophic political and economic choices that the continent made during the Great Depression and the possibility that history may be about to repeat itself.”

How shock waves will hit US if Greece drops euro 06/15/12 What if all this hits this month which was declared Gay Pride Month by the President along with special blessing on homosexuals in the military. I believe that God is going to time the economic destruction of America with an Ordinance of the Amorites or touching Israel. The collapse of Greece with its domino affect will dwarf the impulsion of Lehman Brothers in 2008.

“Bankers, governments and investors are preparing for Greece to stop using the euro as its currency, a move that could spread turmoil throughout the global financial system. The worst case envisions governments defaulting on their debts, a run on European banks and a worldwide credit crunch reminiscent of the financial crisis in the fall of 2008.”

Foreign holdings of US debt hit record high 06/15/12 This is because the US right now looks stable compared to Europe. This will prop the market up for a while.

Greek Candidates Make Final Pleas Before Vote With Euro at Stake  06/15/12 It does not matter who wins. Either way Greece is cooked as austerity or default will destroy the country. Austerity will postpone the collapse of the Euro for a short time.

A Global Recession: The Warning Signs Are Everywhere 06/14/12 The signs are everywhere and that is why you should seek the Lord about what to do. There is no need for God’s people to be caught unawares like the world. God is showing us what is coming so we can seek Him and prepare as He leads us. 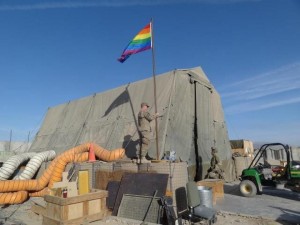 The Gay Victory Flag Over the Military

Panetta salutes ‘gays’ in military 06/15/12 The military caved just like the church and the rest of society. America is a walking spiritual dead man. The advancement of the homosexual agenda proves this without even a shadow of doubt.

“I know how destructive that lifestyle can be, so I’m personally distressed by how official Washington has kowtowed,” he says. “But I think even more so, [I’m] distressed that those in the military — the senior ranks — caved to the political persuasion of the Obama administration to force this down our throats ….”

Study: Youngsters of ‘gay households’ negatively affected 06/14/12 The Hard Left will NEVER admit this NEVER! They will fight this with all they have. They will try and destroy anyone responsible for this research and call it homophobic.

Avoid J.C. Penney this Father’s Day 06/13/12 For its Father’s Day catalog, Penny’s has two homosexuals posing as Fathers! What an insult to every real father. Two male homosexuals are now suppose to be the picture of a family for Father’s Day. It is best to end Father’s Day than be subjected to this.

It’s ‘Pro-Science’ to Abort Children With Genetic Defects 06/12/12 This is the heart of the Hard Left reprobates. The homosexual agenda goes hand and hand with the abortion mentality. I see this as a prolife advocate at the abortion centers. Sodomites flock to protect abortion at these child killing centers. They both hate God so their hatred is a common cause.

Gay Group Applauds Obama’s Amnesty for Illegal Aliens, Including LGBT Youth 06/15/12 Notice how the homosexuals are given special treatment. The reprobates will always protect them as it is the very core issue with them.

Forces Surround Parliament in Egypt, Escalating Tensions 06/15/12 Where is this heading? It looks like a civil war.

“The Muslim Brotherhood, the Islamist group that dominates the Parliament, disputed the court’s ruling and its authority to dissolve the legislature. Saad el Katatni, the Brotherhood-picked Parliament speaker, accused the military-led government on Friday of orchestrating the ruling.”

Troops blockade Cairo parliament  06/15/12 This is a set back to the Islamists agenda.