Hebrews 4:14 Seeing then that we have a great high priest, that is passed into the heavens, Jesus the Son of God, let us hold fast our profession. (15) For we have not an high priest which cannot be touched with the feeling of our infirmities; but was in all points tempted like as we are, yet without sin.

Syria, Iran, Russia and China plan joint war games, Iranian news agency says 06/19/12 This looks like a prelude to the battle of Armageddon as the nations are now lining up for war. Russia will do everything it can to save Syria. This is Russia’s last foothold in the Middle East. Russia wants Syrian ports for its fleet and it has $ billions invested in Syria. Iran wants Assad in power as Syria gives it access to Israel. The stakes are now real high as Russia has already warned that the Syrian war could turn into a world war. Syria remains in a no win situation because if Assad is removed the Muslim Brotherhood will come to power. This means it will be part of the caliphate that goes to war against Israel. Syria does not survive this coming war and will cease to exist as a nation.

“Iran, Syria, Russia and China are planning the “biggest-ever wargames in the Middle East,” according to an unconfirmed report on the semi-official Iranian news site Fars News. A Syrian official denied the claims. According to the article, the four countries are preparing 90,000 troops, 400 aircraft and 1,000 tanks for the massive joint maneuvers, which are to take place along the Syrian coast within a month.”

Syrian Islamist opposition casts out Christians 06/14/12 This could be a blessing to get the Christians out of the country before it is totally destroyed by the coming war.

As the war clouds grow in the Middle East, we grow closer to the Lord Jesus. He remains the anchor to our soul as we live with the Blessed Hope, the Lord Jesus coming for His church.

Joel 3:16 The LORD also shall roar out of Zion, and utter his voice from Jerusalem; and the heavens and the earth shall shake: but the LORD will be the hope of his people, and the strength of the children of Israel. 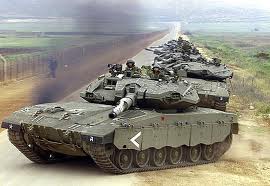 Muslim Brotherhood Warns Egypt’s Generals 06/19/12 The Egyptian generals see the caliphate coming and this is a last ditch effort to stop it. The US is backing the Muslim Brotherhood and the caliphate. In the end, the military will lose and the Brotherhood will gain control of Egypt. This means war with Israel no matter what rhetoric comes from their government.

Angry crowds in Egypt as West warns military over power grab 06/19/12 The Egyptian economy is gone and the military will never be able to hold Egypt together. The US will supply the rebels all the weapons needed to defeat the military. This is very similar to what is happening in Syria. In the end, the Brotherhood will come to power as Obama will make sure of it.

The western border with Egypt has now become the Israel Defense Forces’ most turbulent and dangerous front 06/19/12 Israel is now moving army units to the border with Egypt. The war is not too far off.

Egypt on way to becoming hotbed of terrorism, but Israel’s hands are tied 06/18/12

All that is left is to watch the slow and painful meltdown of the European economy. With each crisis the debt burden gets bigger and bigger. Germany is the key as it is now Europe’s banker keeping several countries from declaring bankruptcy.

Greece’s ailing economy grinds to a halt 06/19/12 Greece is in the downward economic death spiral. The failing economy means less taxes and more unemployment which means more government spending. This increases the debt which means more austerity. There is no way out for Greece and this is the road that most of the European countries are now on.

Debt crisis: Spain and Italy to be bailed out in £600bn deal 06/19/12 With Europe it is now debt, debt and more debt with no end in sight. Germany is now the banker of Europe. As the economies slow down where is Germany going to get the money to bail out these nations?

The bailout is back on: Hopes rise for future of the euro as Greeks stumble to fragile coalition 06/17/12 Once again, all we can do is wait for the next crisis in Europe. Each crisis gets bigger and bigger as now several nations have to be bailed out by Germany.

French business frustration boils over 06/19/12 The Hard Left has now completely taken over France. All they know how to do is raise taxes and spend. They will raise the tax rate in France and kill the economy. The wealthy in France will probably leave which accelerates the destruction of the French economy and banks.

Dithering Europe is heading for the democratic dark ages 06/18/12 The Europeans have voted themselves into an economic collapse with no way out. They have voted for more spending, except for Greece, and more taxes.

Jude 1:24,25 Now unto him that is able to keep you from falling, and to present you faultless before the presence of his glory with exceeding joy, To the only wise God our Saviour, be glory and majesty, dominion and power, both now and ever. Amen.