2Thessalonioans 2:10 And with all deceivableness of unrighteousness in them that perish; because they received not the love of the truth, that they might be saved.
Commentary

During last night’s prayer service, I spoke about how do we know that we are following the truth regarding the prophetic end time events and the Second Coming of the Lord Jesus Christ. I went into detail from the Bible so you know that you are standing on the truth. To listen to the teaching go to The Wise Shall Understand. This is a very important teaching as it protects you from false teachings and anchors you in the truth.

Tonight I will be speaking in Leesburg, Northern Virginia. I know this is short notice, but the speaking came up on short notice. I will be giving a PowerPoint presentation on the Coming Middle East war. If you would like to attend call Paula at (703) 928-1608. 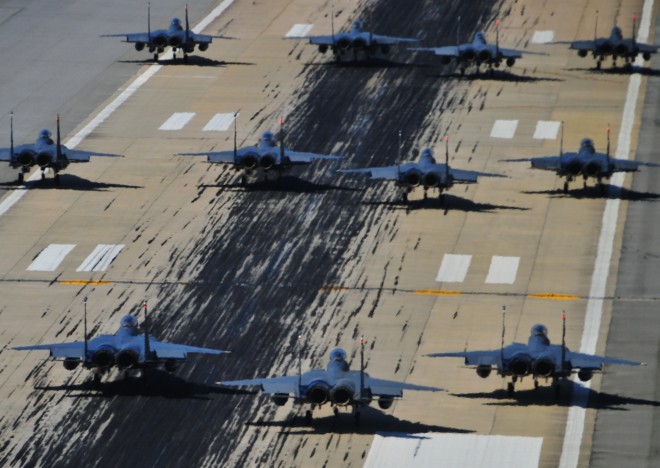 Massive Flight of F-15s Taking Off For Mock Attack

The”drums for Armageddon” are now beating loudly. The United States is practicing long range attacks. The US military is very concerned about China and Iran. These long range practices have never really been done before but now there were two in just a few weeks. I just feel that later on this year could see the outbreak of the war that leads to Armageddon.

The practice bomb runs are also a reminder of America’s overwhelming aerial advantage over other nations. The 4th Fighter Wing sortied more fighters on Monday than most countries’ entire air forces possess. And those 70 F-15Es represent just a third of the Air Force’s Strike Eagle fleet, to say nothing of all its F-16s and F-22s or all its bombers and armed drones.

There was another new translation of the Bible that was just published. Each new one seems to be getting worse. This one omits angels and Christ. We will be speaking on this Sunday night on my blog talk radio show The Wise Shall Understand. You can call in with questions as the topic of Bible translations is one of the most important for the hour that we live in. The Bible is under attack from both the inside and outside. The one from in the inside is far more dangerous.

John 3:21 But he that doeth truth cometh to the light, that his deeds may be made manifest, that they are wrought in God.