Luke 21:11 And great earthquakes shall be in divers places, and famines, and pestilences; and fearful sights and great signs shall there be from heaven.

There is no political hope. Romney is soft-core left. He will promote the homosexual agenda with velvet gloves rather than the hard fist of Obama. My hope in this is in the LORD. This is beyond normal politics as America is now under political judgment. Romney will not move the US embassy to Jerusalem. He will not drop the two state policy with dividing Jerusalem. There is nothing in his past to indicate he will. He will be a soft type of liberal that will advance the agenda that brings God’s judgment on the nation. If you find this hard to believe, just look at the following article where Romney endorses homosexual adoption!

“The issue Romney now faces is given his stance that same-sex couples not be allowed to marry, he is advocating that children be adopted into a household where the parents in a majority of the states are not allowed to marry. “This is a great example of how Mitt Romney is trying to be all things to all people,” Tricia Erickson, the author of Can Romney Serve Two Masters?: The Mormon Church Versus The Office of the Presidency of the United States of America, told The Christian Post.”

On my Friday night blog radio service, I pray for the political situation and look to the Lord and not American politics. I am doing this every Friday night and all are welcome to attend. The LORD is who I look to because He has judged America with no way out. We are now boxed in with either hard-core or soft-core rebellion against His word. America cannot stand with the president promoting the homosexual agenda. It is the end, and judgment is beyond the door but is in the house.

I look to the Lord Jesus Christ and His coming for the church. As long as I am focused on Him, I have peace. There is great fear and turmoil coming for those who are not anchored in the Lord Jesus. The judgment is now coming from all angles. Please live with the blessed hope in your heart.

Iran boasts U.S. has abandoned Israel 05/14/12 The Muslim propaganda against Israel is now very bold. They must feel that the war is close, as they are openly talking about annihilating, not only Israel, but all the Jews. God is about to move against Iran and it will not be able to destroy Israel. Ezekiel 38 is clear that Persia, modern Iran, is defeated on the Mountains of Israel.

“Iranian outlets have been claiming recently the United States has been forced to bow before Iran on its nuclear program, demonstrating the West’s abandonment of Israel and paving the way for the Islamic regime to annihilate the Jewish state.

“With diminishing support for Israel and with the (upcoming) collapse of the monarchy in Saudi Arabia,” Zarei claims, “there won’t be any obstacles left facing Iran with its policy of annihilation of Israel.”

Calling Israel a danger to Islam, the conservative website Alef, with ties to Iran’s supreme leader, Ayatollah Ali Khamenei, said the opportunity must not be lost to remove “this corrupting material. It is a ‘jurisprudential justification’ to kill all the Jews and annihilate Israel, and in that, the Islamic government of Iran must take the helm.”

Nasrallah: Hezbollah able to strike anywhere in Israel 05/11/12 This is probably true which means this war will be vicious, brutal and quick.

Christians, Jews to unite against Islam? 05/12/12 As the Muslim caliphate forms, watch the Christians and Jews grow closer for survival. This reminds me of Psalm 83:3 They have taken crafty counsel against thy people, and consulted against thy hidden ones. The Muslims are coming after two people: thy people are the Jews while the hidden ones are the church.

“Last Wednesday in Rome, Jewish leaders for the first time rallied alongside Christians in a candlelit vigil to denounce the attacks in the Middle East and Africa. It was “interfaith” or “ecumenical” dialogue at its best. Forget the theological questions, which remain unsolvable. There is an urgent mutual solidarity about the single most defining issue of our time: religious freedom.”

The new face of Israel’s social protest 05/13/12 This is what is coming to America this summer.

Seminar about The Dangers of Fukushima Nuclear Plant 05/02/12 (Video) Take time to watch this as it is not conspiracy gone wild, but rather leading scientists warning of an incredible looming disaster. The US is in the cross-hairs of this disaster and the winds could bring the radiation to Hawaii and the West Coast of America. This is very serious.

The governments of Japan and the US have lied from the start and the main media will not report on this. The big concern is that a powerful earthquake in the area will crack the water pool cooling the reactor rods. The water will leak out and the rods will overheat causing an explosion. This will spew highly radioactive cesium-137 into the air and the winds will take it to America. Already radioactive particles are found 400 miles from Japan. This could also poison huge areas of Japan and turn it into a wasteland. The potential for a mega disaster for a world event is real.

A press conference about the on-going, rarely publicized and still grave situation around the stricken Fukushima Daiichi nuclear reactors, featuring a nuclear scientist from Japan, and first hand medical reports of clinical and on site observations in Japan related to the Fukushima radiological contamination, with discussion of the immediate needs to protect Japanese citizens now living in contaminated areas, for better monitoring of radioactive content of food, and for the cessation of incineration and burying of radioactive tsunami rubble throughout Japan.

Monsanto and The Shocking Cause of Birth Defects 05/13/12 I believe that genetically modified foods and herbicides are going to greatly contribute to the world-wide famines that are predicted prior to the Second Coming of the Lord Jesus Christ. Monsanto is leading the pack in destroying the world’s food supply.

“Roundup Ready soy is now being cultivated on a massive scale across the globe, along with the exponentially increasing use of the herbicide Roundup. Monsanto’s “Roundup Ready” soy beans are genetically modified to survive otherwise lethal doses of glyphosate, the active ingredient in the company’s herbicide Roundup.” 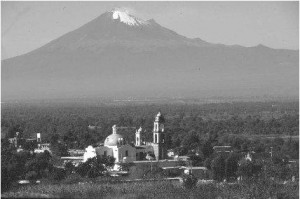 Mexico City with Popocatepetl Volcano in the Distance

Mexico volcano spews huge ash cloud, frightens villagers 05/12/12 The earthquake has been getting progressively worse. This could wreck havoc with Mexico City and its 25 million inhabitants.

The US, China, and India Risk Severe Water Shortages05/13/12

“The US already has large areas that are suffering from low levels ground water supplies. States such as Arizona, California, Kansas, Nebraska, New Mexico, and Texas are considered to be at ‘high’ or ‘extreme’ risk of water shortages. The Ogallala Aquifer supplies the majority of these high risk states, supporting about 15 percent of national corn and wheat production, and 25 percent of the cotton production, and is currently being depleted faster than it can be refilled, leaving some to fear that fresh water could run out in the region in the not too distant future.”