Ezekiel 29:10 Behold, therefore I am against thee, and against thy rivers, and I will make the land of Egypt utterly waste and desolate, from the tower of Syene even unto the border of Ethiopia. (11)  No foot of man shall pass through it, nor foot of beast shall pass through it, neither shall it be inhabited forty years. (12) And I will make the land of Egypt desolate in the midst of the countries that are desolate, and her cities among the cities that are laid waste shall be desolate forty years: and I will scatter the Egyptians among the nations, and will disperse them through the countries.

As the Islamic caliphate is fast forming in Egypt, it is a sign the nation does not have long to exist. The Egyptians, along with many other Arab nations, are going to attack Israel with a jihad in an attempt to destroy and take Jerusalem. With the Muslim Brotherhood now in power, it will not be long before Egypt tries to destroy Israel.

The creation of the Islamic caliphate is one of the key prophetic events to watch. When they create the caliphate and form their Jihad, there is no stopping the events rushing towards the battle of Armageddon and the Day of the LORD with the Second Coming of Jesus Christ with His church. 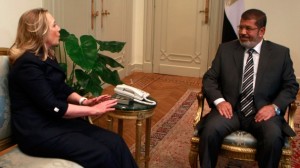 Clinton to Egypt’s Morsi: Find way out of crisis 07/14/12 This is just like meeting with Hitler after he was democratically elected and congratulating him. Because Morsi was elected has no bearing on this meeting that anything good happened. People can elect pure evil into government just like the Palestinians did in Gaza by electing Hamas. In the long run, because Morsi is Muslim Brotherhood, he will turn out just like Hamas.

The following are quotes from the article with my comments.

“U.S. Secretary of State Hillary Rodham Clinton used her first meeting with Egypt’s new Islamist president to press Mohammed Morsi to start a dialogue with military leaders as a way of preserving the country’s transition to democracy. Clinton voiced support for the “full transition” to civilian rule at a time when Morsi’s backers are in a political standoff with the generals who have ruled since President Hosni Mubarak was ousted last year.”

Notice the meaningless terminology “transition to democracy.” She wants the Muslim Brotherhood to be in full charge of the military. Once the Brotherhood has the military, they will use it to crush all opposition and then onto Israel.

Resolving the impasse “requires dialogue and compromise, real politics,” Clinton said. She said the United States is doing all it can to “support the democratically elected government and to help make it a success in delivering results for the people of Egypt.”

She and Obama did all they could to make sure that the Brotherhood came to power.

Clinton and Morsi didn’t shake hands, at least when they first appeared before reporters – a subject of much speculation because of Morsi’s Muslim faith. But the president shook hands with Clinton and the entire U.S. delegation behind closed doors, according to a U.S. official.

This is just the beginning for women in Egypt. The Secretary of State would not shake hands with the President of Egypt because she was a woman in Egypt! Full Sharia law is on the way. This was a great opportunity for a leading feminist to stand with her sisters in Egypt that are being persecuted by Islam. She failed as expected.

The U.S. has been careful not to take sides, focusing on principles instead of personalities and parties. The Obama administration has called on all sides to negotiate a path forward that remains faithful to the ideals of Egypt’s 2011 revolution.

What nonsense as Obama supported the Muslim Brotherhood all the way.

In her discussions with Morsi, Clinton emphasized the need for Egypt to adhere to its 1979 peace treaty with Israel, while also seeking continued counterterrorism cooperation and offering U.S. support to help Cairo regain control of the increasingly lawless Sinai Peninsula – a major security concern for Israel.

In his time, Morsi will negate the treaty with Israel. Right now he will play along with Clinton until he is ready to break the treaty. The Brotherhood’s aim is the destruction of Israel, just as this is Hamas’ goal.

For Egypt’s sake, Clinton pledged hundreds of millions of dollars in debt relief, private investment capital and job creation funds – money the Obama administration has outlined previously. She told Morsi she would send a large business delegation to Cairo in September to strengthen U.S.-Egyptian economic ties.

He will suck all the money he can out of the US and the West for as long as he can. In the end, the Muslim Brotherhood will turn against the West and attack Israel.

Clinton held discussions later Saturday with Amr. She was to meet Sunday with the head of the military council, Field Marshal Hussein Tantawi, before visiting the port city of Alexandria to meet with leading women, the Coptic Christian community and young entrepreneurs. She then was to head on to Israel.

Women are being raped, molested, and publicly beaten all the time in Egypt by the Islamists. There will be no women’s rights in Egypt very soon. Obama and Clinton have said nothing while the Muslims are trying to destroy the Coptics. They will not say anything against Islam and the Muslims. It is best for all Coptics to flee Egypt just as, if possible, for the Jews to have fled the Nazis.

Egypt does not have long to live as a nation. Watch the rhetoric start to focus on Israel and Jerusalem. When this happens you know the time is very close.

The following is a reposting of my June 27, 2012 posting on my blog. It is about Morsi and making Jerusalem the capital of a caliphate.

Jerusalem to become Egypt’s capital under Mursi’s rule, says Muslim cleric 06/07/12 (Video) Everyone needs to watch this video and you will get an idea why America is in trouble with God! This is what Obama and Clinton are praising and supporting as a victory for democracy! They know full well what Morsi stands for. No wonder America is burning with fires throughout the West!

This is a political rally for Morsi who is sitting right behind the speaker cleric Safwat Hagazy. I see this as a declaration of war against Israel as they are openly calling for killing the Jews and taking Jerusalem! With rallies like this, the war cannot be far off. It reminded me of the huge rallies that Nazis held.

“Tomorrow Mursi will liberate Gaza,” the crowds chanted. “Yes, we will either pray in Jerusalem or we will be martyred there,” Hegazy said.

I see the statement by Hegazy that “Yes, we will either pray in Jerusalem or we will be martyred there,” as being prophetic because they will all die there. Egypt does not survive the war and all that survive must flee Egypt into the world. Egypt is totally destroyed.