Defiant Planned Parenthood: ‘F’ anyone who ‘Fs’ with us

Matthew 15:18,19 But those things which proceed out of the mouth come forth from the heart; and they defile the man. For out of the heart proceed evil thoughts, murders, adulteries, fornications, thefts, false witness, blasphemies:

PP is being exposed for just what it is. This child killing organization is fighting back because $500 million is at stake. Notice when the pressure is on, how PP reverts to vile and vulgar words because this is exactly what it is! The Lord is manifesting these baby killers for exactly what they are: vile and vulgar. They are unclean in their hearts.

Matthew 5:8 Blessed are the pure in heart: for they shall see God.

“Defiant Planned Parenthood: ‘F’ anyone who ‘Fs’ with us”
Matthew 12:34 O generation of vipers, how can ye, being evil, speak good things? for out of the abundance of the heart the mouth speaketh.

“Amid controversy over its sale of the body parts of unborn children, Republicans fought a losing battle to defund Planned Parenthood, granting $500 million in the 2018 budget to the nation’s top provider of abortion. Now, Planned Parenthood of New York is putting some of its cash into an unusually explicit advertising campaign that sends a blunt message to anyone who continues to oppose government funding.

A new 45-second video – which Ad Age says is “targeting millennials with its bold messaging” – defiantly concludes with: “Protect our right to safely f— whoever the f— we want.” The F-word is employed throughout the ad by a montage of New Yorkers and is censored only in print placements for the campaign. The ad begins with city dwellers using the term in a disparaging way then moves to “encouragement,” as Ad Age describes it, such as, “F— your hot as f— bartender.” 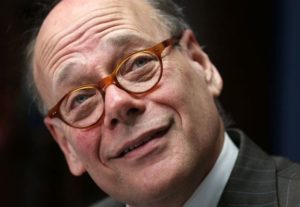 “Democrat Rep. Steve Cohen Denies Calling for Coup Against Pres. Trump After Asking, ‘Where Are Military Folks?’” The Dems are getting very close to insurrection against the President. The Hard Left media is already over the top. They are collectively having mental breakdowns because their god, the deep state, is being dismantled by President Trump. They have no way to stop this process, so they are now desperate!
These are very dangerous people, and they are getting worse by the week if not by the day. They can’t keep up this anger and hatred without breaking.

“Rep. Steve Cohen (D-TN), who last week said he wanted to award a Purple Heart to anti-Trump FBI agent Peter Strzok, posted a tweet Monday after President Donald Trump’s meeting in Finland with Russian President Vladimir Putin that many read as a call for a coup, asking, “Where are our military folks ? The Commander in Chief is in the hands of our enemy!”

Cohen was commenting on a tweet by Democratic Party activist Scott Dworkin who accused Trump of being a traitor who should resign, “BREAKING: Trump just said he trusted Putin over the American military and the American intelligence services, in the assessment of election interference. He absolutely needs to resign. What a complete and utter disgrace. Absolutely disgusting. What a traitor.” 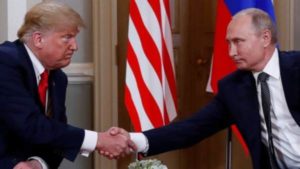 “Putin Destroys Deep State – Blows Up Mueller’s Indictment of Concord Management” This is amazing to watch as Putin is targeting Mueller and blowing up his investigation! President Trump and Putin should team up and take down Soros. This man is a danger to the entire world.
These events are all mind numbing!

I’d like to add something to this. After all I was an intelligence officer myself. And I do know how dossiers are made up. Just a second. That’s the first thing.

For instance the Concord Company that was brought up is being accused of interference but this company does not constitute the Russian state and does not represent the Russian state and I brought several examples before. Well, you have a lot of individuals in the United States, take George Soros for instance, with multi billion capitals but it doesn’t make him, his position, his posture, the posture of the United States. No it does not. Well it’s the same case. There is the issue of trying a case in the court and the final say is for the court to deliver. We’re now talking about the individuals and not about particular states.” 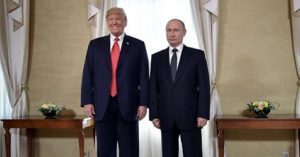 “Trump blasts Mueller probe, Putin denies meddling as leaders tout summit as ‘success’’I am fully persuaded that Mueller is part of a treasonous conspiracy between the FBI, DOJ and the intelligence agencies to overthrow the election of Donald Trump. They are the deep state and it is real.
It is getting so bad the question is who is worse: the FBI/DOJ or Putin?
I still have great faith in the military.

“During their press conference, few topics were off limits. The session with international reporters ended with Putin being asked whether he had compromising material on Trump, which he dismissed as “nonsense.” Even that moment was overshadowed by the extensive comments on election meddling. Trump once again asserted there was “no collusion.”

“I didn’t know the president. There was no one to collude with, and there was no collusion with the campaign,” Trump said, suggesting Democrats have used the issue as an excuse for losing. “We ran a brilliant campaign, and that’s why I’m president.”

When asked which side is responsible for damaged relations, Trump said, “I hold both countries responsible.” 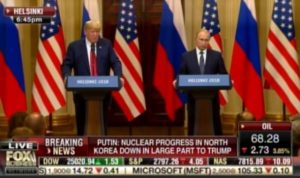 “PUTIN DROPS BOMB AT HELSINKI PRESSER: Says US Intelligence Helped Move $400,000,000 to HILLARY Campaign!! (VIDEO)” What can I say about this revelation! Putin gave President Trump, Hillary’s head! Notice that Putin also said that US intelligence helped her get the money!
This is almost too good to be true! Watch the deep state media try to bury this as this information could pull down the entire deep state.

Putin offered permitting officials in the US, including Mueller, to Russia to assist in their investigation of the supposed Trump-Russia collusion story. Then Putin dropped his bomb where the US could reciprocate Russia in one of their investigations –

For instance, we can bring up Mr. Browder, in this particular case. Business associates of Mr. Browder have earned over $1.5 billion in Russia and never paid any taxes neither in Russia or the United States and yet the money escaped the country. They were transferred to the United States. They sent [a] huge amount of money, $400,000,000, as a contribution to the campaign of Hillary Clinton. Well that’s their personal case. It might have been legal, the contribution itself but the way the money was earned was illegal. So we have solid reason to believe that some [US] intelligence offers accompanied and guided these transactions. So we have an interest in questioning them.” 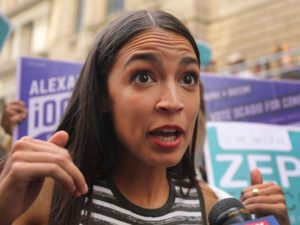 “Alexandria Ocasio-Cortez Can’t Explain ‘Occupation of Palestine’ but Opposes It” This is all part of the Democrat party being taken over by Communists and Muslims. She knows nothing about what is happening in Israel: only that she is against Israel! Coming against Israel is in the DNA of people like her.

The Lie of Evolution 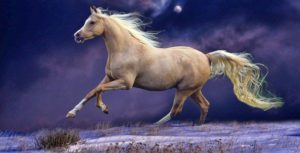 “Media silent on genetic study defying evolution”This is an excellent article showing that science is destroying the theory of evolution. Research into DNA is destroying the theory of evolution.
I doubt the evolutionists will give up this theory because the alternative is unacceptable. The alternative is creation which they will never submit to the Creator. In the end, God is clearing out the lies and showing man the truth. For this reason, man as no excuse for believing the lies.

Genesis 1:1 In the beginning God created the heaven and the earth.

“The study was most ambitious and sweeping study by evolutionary biologists on the historic changes in animal and human DNA barcodes. It found not that humans and animals have been around on Earth for millions of years, but, rather, less than 200,000 years – and that they all seem to have appeared at once, a clear refutation of the theory of evolution over vast eons of time. How extensive and time-consuming was the study? The researchers examined some 5 million gene snapshots, or DNA barcodes, collected from 100,000 animal species by hundreds of researchers around the world and deposited in the U.S. government-run GenBank database.

However, some anti-evolutionary voices are emerging eager to seize on the findings.

Nathaniel Jeanson, who holds a Ph.D. from Harvard University in cell and developmental biology and the author of the book “Replacing Darwin,” says, “There’s a great danger to the evolutionary model in this study in ways they don’t quite realize yet.”

He notes, of course, the fact that many species formed contemporaneously with modern human beings. But he adds that data strongly suggests that the mitochondrial DNA clocks of modern humans “formed within the last 6,000 years.” That would be a confirmation of the literal Genesis account of Creation. He also asserts, after studying the data released in the report that suggests many, if not most, of the species “formed within the last 6,000 years.”