John 3:19 And this is the condemnation, that light is come into the world, and men loved darkness rather than light, because their deeds were evil.

He needs to name the names and then a purge of these loathsome creatures that lurk in the swamps of Washington! We’ve had enough of this scum destroying our nation for their greed and sin. The Chinese probably know every pedophile in DC and own them. What a disgusting, loathsome collection of rabble in the swamp.
May God purge this putrid stinking mess and free us from their corruption! The time has come. I hope President Trump fully drains the swamp in 2021, and we will give God all the glory. 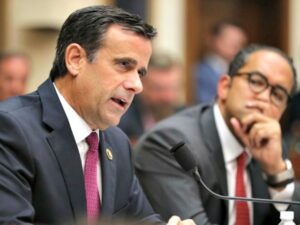 “DNI John Ratcliffe: China Is Using Blackmail, Covert Influence to Target Members of Congress” He needs to name the names and then a purge of these loathsome creatures that lurk in the swamps of Washington! We’ve had enough of this scum destroying our nation for their greed and sin. The Chinese probably know every pedophile in DC and own them.
What a disgusting, loathsome collection of rabble in the swamp.
May God purge this putrid stinking mess and free us from their corruption! The time has come. I hope President Trump fully drains the swamp in 2021, and we will give God all the glory. 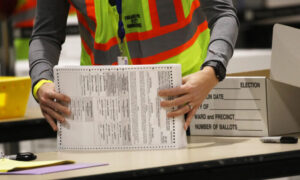 “What’s Happening in US Election Matches What Happened in Venezuela, Expert Says” This is a fantastic article tying together what happened in Venezuela to what is happening right now in America. The big difference there was massive repentance by the American church and we called upon the Lord. In addition, America has we the people patriots who will not stand by while the nation is being stolen by Communists.

“By 2003, opponents of Chávez managed to collect enough signatures to trigger a referendum. “That’s when he started to panic,” the former intelligence official—who is also an expert in Latin American politics and counterterrorism—told The Epoch Times. “So he started talking to a company called Indra, which is a Spanish company that runs elections.”

The technology used by Indra at that time, according to the expert, wasn’t “flexible” enough to do what Chávez wanted to do. He said that the regime then turned to Smartmatic, a company registered in Delaware and founded by three young Venezuelan engineers. After receiving a contract for $150 million to overhaul the country’s election system ahead of the 2004 referendum, Smartmatic bought machines from Italian lottery machine maker Olivetti.” 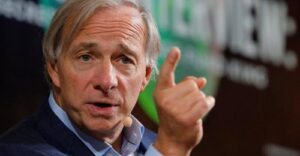 “The United States Is At A Tipping Point That Could Lead To Revolution Or Civil War” A very interesting article about how economics in lining up for civil war. How can we ever reconcile with Communists? They would call for a truce, only for deception to gain an advantage. The Communists will do anything to take control just like we are seeing across America with this election!

“”It is in this stage when there are bad financial conditions and intensifying conflict,” wrote Dalio. “Classically this stage comes after periods of great excesses in spending and debt and the widening of wealth and political gaps and before there are revolutions and civil wars. United States is at a tipping point in which it could go from manageable internal tension to revolution and/or civil war.” 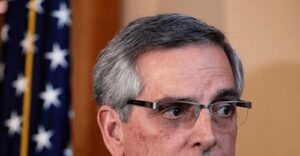 “GA Sec. of State Raffensperger: ‘We’ve Never Found Systemic Fraud, Not Enough to Overturn the Election’” The three corrupt blind Republican mice/rats are the governor, Lt governor and Secretary of State. They are as corrupt like the dems and most likely all took bribes from the Chinese Communists. What is needed in Georgia is a political enema that posts We the People back in control.

“We’ve never found systemic fraud, not enough to overturn the election. We have over 250 cases right now. We reached out to the governor and asked for additional manpower resources that gives us additional reach to finish up these investigations quickly, but right now, we don’t see anything that would overturn the will of the people here, Georgia.”

He added, “I’m a Republican. I vote for Republicans. So I wish them well. The job of the Republican Party is to raise money and turn out the vote. My job as secretary of state is to make sure we have honest and fair elections. It’s as simple as that, and integrity matters.”

COLLAPSE OF GEORGIA GOP AND GOVERNMENT 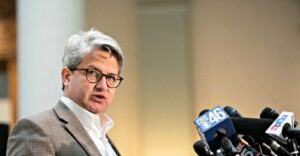 “Georgia election official Gabriel Sterling on Sunday during MSNBC’s “Meet the Press” called President Donald Trump’s claims of voter fraud in the state’s 2020 presidential election “misinformation.”
It i s very, very clear the entire Georgia Republican establishment is corrupt and must be removed. We see the fraudulent votes being added with our eyes with all the electronic switching, and yet these lying corrupt politicians try and blame President Trump.
The time is very close for the American Patriots to end this corruption and start a new party. The sleaze is right before our eyes. I’ll venture to say, they’re all bribed or blackmailed by the Chinese Communist. Does China now control all the Dems and most of the Republicans?

Sterling publicly asked Trump to denounce the threats being made against election workers for doing their jobs. Sterling said, “At this point it’s like Whac-a-Mole even saying the president’s statements are false, they’re misinformation. They are stoking anger and fear among his supporters, and hell, I voted for him. And the situation’s getting much worse.”

He added, “It’s not just Republicans on this side this time. Even in polling up to 2019, up to 50 percent of Democrats think Russians flipped votes on machines. So this is going both ways. It’s undermining democracy, and we’ve got to get to a point where responsible people act responsibly.”

GA REPUBLICANS SURRENDERED TO THE COMMUNISTS 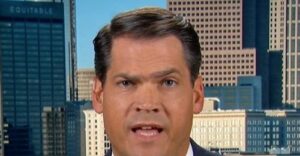 “Georgia Lt. Gov. Duncan: Trump’s ‘Mountains of Misinformation’ Hurting Republicans in Senate Runoff” What appears to be happening, the Lord is using President Trump to manifest the corrupt Republican politicians along with the Communist dems. The corruption in GA is manifest for all to see, yet this totally corrupt Republican denies what the dems are doing to a Republican president!!! Someone ones Duncan. There is no doubt in my mind he is owned and most likely the Communist Chinese.

“Duncan said, “The rally last night was kind of a two-part message. The first part was very encouraging to listen to the president champion the conservative strategies of Senators Loeffler and Perdue and the importance for them being re-elected.”

He added, “The second message was concerning to me. I think the fanning of the flames puts us in negative misinformation. Mountains of misinformation are not helping the process but only hurting it. I worry we are handing off a playbook to the Democrats for January 5, and certainly I can’t think of a worse playbook to handoff over the last four or five weeks to the Democrats.” 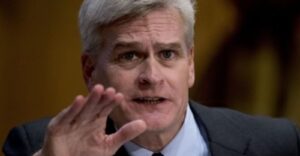 “GOP Sen. Cassidy: Trump ‘in Effect’ Conceded with GSA Move” Notice how Rino after Rino senators turns against the President while zero are boldly standing with him. Watch the two GA senators stay distant from him. It is We the People who are standing with him.

“Cassidy said, “The president in effect has conceded when he ordered the General Services Administration to begin the transition. So if by damaging or democracy, you mean that the next administration won’t be prepared, that preparation is taking place. Now, if you want to speak about how things are undermined, I think the president — by the way, if there’s fraud, it should be uncovered, but it should be uncovered in a way which a judge agrees.
If the president is able to show that, then that’s important. If they can’t show, that’s also important. I’m hoping the American people would look and say proven in a court of law, no, the court of law threw it out and use that to base their faith in how the elections go.” 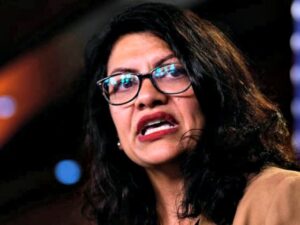 “PA Rep. Guy Reschenthaler Blasts Rashida Tlaib, Demands Swift Action” The dems are turning real hard and real fast against Israel. It won’t be long before the entire party is against Israel and the American Jews. Whatever is against God and his word, these people are for.

“In response to Tlaib’s recent participation in an anti-Israel conference with purported terrorist ties as well having recently retweeted a slogan calling for the elimination of the Jewish State, the Western Pennsylvania Republican sought to garner support from fellow congressmen for his proposal.

“This week, Democrat Congresswoman Rashida Tlaib participated in a forum led by one of the nation’s most anti-Israel advocacy groups that featured other participants with reported connections to Hamas, terrorism financiers, and the Boycott, Divestment, and Sanctions (BDS) movement,” the statement reads.” 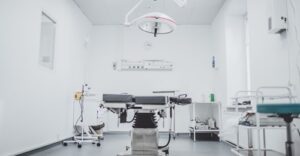 “127 Abortion Clinics Have Closed Since 2015: Life Is ‘Winning,’ Pro-Life Group Says”
This is great news, and keep praying they all close down.

“A new report by a pro-choice organization has drawn opposite reactions along the abortion divide by showing that dozens of independent abortion clinics have closed in the past five years.

The 18-page report by the Abortion Care Network says 127 independent abortion clinics have closed since 2015, including at least 14 this year and 27 in 2019. The Network is an association of independent, community-based abortion providers.

Nearly three-fifths (58 percent) of abortions in the U.S. are performed by independent abortion clinics, according to the report. Planned Parenthood performs 37 percent of the nation’s abortions, the report says.” 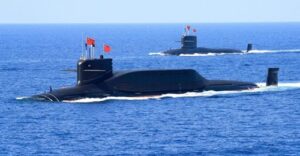 “China Pushing Things To “Boiling Point”: Admin Says Pentagon Alarmed Over Taiwan” China is very aggressive like a wild wounded animal. China is actually looking to start a war. This now is a very dangerous nation.

“As Chinese military activity around Taiwan continues to ramp up, a senior administration official tells me, “We are watching very closely and would be ready for anything including a grave miscalculation by the PRC. We’re definitely watching them.”

He added at a moment Trump continues to chip away at Beijing through a series of unprecedented ‘blacklisting’ measures, as well as new visa restrictions against Communist Party members and their families (which includes tens of millions of Chinese citizens total) that American defense officials think geopolitical flashpoints involving Chinese ‘aggression’ are about to boil over.

“Sooner or later they’re willing to push things to a boiling point over Taiwan as they did in Hong Kong and on border with India,” the official is cited further as saying to CNN’s Sciutto. “It’s coming.” 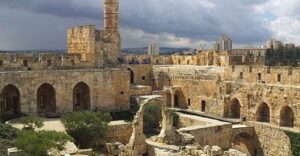 “Tower of David Museum Gets Major Makeover as Archaeologists Uncover Pieces of Jerusalem’s Past” I found this a very interesting article.

“One of Jerusalem’s most iconic sites is the Tower of David at the entrance of the Old City. This ancient citadel is getting its first major overhaul in hundreds of years.

“This is a rare and unique opportunity for archaeologists because we have a lot of questions about the citadel, archaeological questions, historical questions and not every day you get the chance to explore a symbol in Jerusalem,” Amit Re’em, Jerusalem’s Chief Archeologist told CBN News. “The [Tower of David Museum] is a symbol. This is the struggle of Jerusalem.”