He turneth rivers into a wilderness, and the watersprings into dry ground; A fruitful land into barrenness, for the wickedness of them that dwell therein. He turneth the wilderness into a standing water, and dry ground into watersprings.

The month of June began with Obama signing a presidential order declaring June as “Gay Pride Month”. It now ends with incredibly severe weather, including massive forest fires, record heat and drought, along with a freakish storm called a “Derecho”! Four states were declared disaster areas, and there appears to be no letup in the severe weather. America is now on the verge of no return with the LORD. The vast majority of the Christians are fast asleep with no idea of repentance and calling out to the LORD for mercy and help. With the church asleep, there is no hope as the judgments will intensify in power and frequency until America is broken and a third world country. The ONLY hope lies with the church crying out to the Holy God of Israel. Until that time, there is no hope, and certainly there is no political hope.

President Obama Celebrates Pride Month 06/01/12 (Video) He mentions two dads and two moms among other incredible statements. He is now leading the charge in creating “Ordinances of the Amorites” and setting America up to be judged by the Holy God of Israel. How far off can it be when he is trying to force sodomite marriage on the nation?

Intense Storms Called a “Derecho” Slam 700 Miles of the US 06/30/12 I never heard of such a storm but I think that many more are on the way as the nation goes deeper in the homosexual agenda. These storms are like massive bulldozers destroying all in its path.

“A “super derecho” of violent thunderstorms left a more than 700-mile trail of destruction across the Midwest and mid-Atlantic on Friday, cutting power to millions and killing eleven people. More than 450 damaging wind reports were received by NOAA’s Storm Prediction Center (SPC) as the derecho took roughly 12 hours to race from northern Indiana to the southern mid-Atlantic coast. A derecho is defined as a widespread and long-lived wind storm that accompanies rapidly moving showers or thunderstorms. The most severe derechos are given the adjective “super.”

These storms also remind me of Leviticus 18 and how God drives people off the land when a nation is being judged for sin.

Leviticus 18:24,25 Defile not ye yourselves in any of these things: for in all these the nations are defiled which I cast out before you: And the land is defiled: therefore I do visit the iniquity thereof upon it, and the land itself vomiteth out her inhabitants. (26-27) Ye shall therefore keep my statutes and my judgments, and shall not commit any of these abominations; neither any of your own nation, nor any stranger that sojourneth among you: (For all these abominations have the men of the land done, which were before you, and the land is defiled;) (28) That the land spue not you out also, when ye defile it, as it spued out the nations that were before you.

The Destruction of the US Military

Notice how these dates coincide! The end of once glorious US military is now in sight. It is not an outside enemy which destroyed it but the enemy from within. The combination of the Hard Left reprobates, along with a dead apathetic church, were the death knell for the military. All the signs of the end are warning!

Pentagon holds first gay pride event 06/26/12 This will be the first of many. If Romney is elected he already said he is going to allow open homosexuality in the military. Please do not look to Romney as a political savior.

“The Pentagon on Tuesday saluted open gays in the ranks, with a civilian lawyer calling on fellow homosexuals to “stretch a little” and become more visible inside the military in the drive for benefits for same-sex couples. “We need to be as visible as we can be,” Gordon Tanner, principal deputy general counsel of the Air Force, said at the Defense Department’s first gay pride event. “Let us be a bridge to our straight allies.”

Panetta to Congress: Act Now to Block ‘Devastating’ Defense Cuts 06/26/12 Notice the timing of the events. As Panetta is celebrating open sodomy in the US military, on the SAME day he is begging Congress not to destroy the military through budget cuts! The days of the US military are now numbered. God must judge the open homosexuality in the ranks.

“Defense Secretary Leon Panetta urged Congress on Friday to act soon to stop a new round of defense budget reductions next year, saying the threat of $500 billion more in cuts leaves military families and defense workers under a cloud of uncertainty.”Congress can’t keep kicking the can down the road or avoiding dealing with the debt and deficit problems that we face,” Panetta told a news conference. “The men and women of this department and their families need to know with certainty that we will meet our commitments to them and to their families.”Panetta’s remarks come at a time of renewed focus on the looming across-the-board defense cuts, which would be carried out under a process known as “sequestration.” Industry officials met with House Democrats to discuss the cuts on Thursday and held talks with Panetta at the Pentagon on Tuesday.”

In a first, Pentagon celebrates gay pride 06/26/12 This could be a last because the US Military might not have a long time left. God’s judgments are closing in on America, and the US Military appears to be a prime target.

Some of the destruction that occurred during “Gay Month”. There are plenty more on the way as the nation goes deeper and deeper into the homosexual agenda. 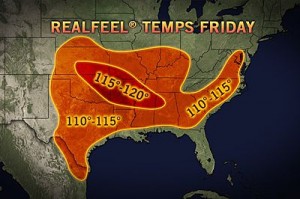 “Three governors declared a state of emergency after powerful storms swept through the eastern United States Friday night, resulting in at least 12 deaths and leaving more than three million without power. Under the statewide emergency declaration, Virginia, West Virginia and Ohio, can utilize all government resources immediately to help those in need. The District of Columbia also declared a state of emergency.”

Drought Grows Nationally Even As Florida Gets Soaked 06/29/12 The heat and drought are coinciding and once again destroying vast acreage of US farmland.

Colorado’s 2012 wildfire season “unprecedented” 06/29/12 This state was also declared a disaster area with the massive record-breaking fires. With the drought and heat in the West, the stage is now set for massive fires this summer.

“It’s no exaggeration to say Colorado is burning. The state is going through one of the worst fire seasons on record, with some calling it unprecedented. At least eight wildfires are burning across the state, with several major fires starting this past week.”

Colorado wildfire: 346 homes lost, 1 dead in Waldo Canyon fire 06/29/12 This is just a warmup for what is coming as the country goes deeper in the homosexual agenda.

“The roaring Waldo Canyon fire that exploded into west-side neighborhoods of Colorado Springs destroyed 346 homes — making it the most destructive wildfire in state history.”

Drought threatens U.S. food prices 06/2712 In June the food supply started to be threatened by the intense heat and drought!

“A drought in the Corn Belt and elsewhere in the Midwest has pushed the bushel price of corn up about 27 percent in the past month alone, and there is little sign of rain in the near future, a forecast that could soon push up food costs across the country, meteorologists say. Last week, 63 percent of the corn crop was rated in good or better condition, according to the Agriculture Department. This week, that figure had fallen to 56 percent.”

Proverbs 14:34 Righteousness exalteth a nation: but sin is a reproach to any people