The above verses are directed at ancient Israel but it is a perfect fit for modern America. Today, there is no knowledge of God in the land. The church sat by and let the reprobates steal the country. Now America is suffering all the curses found in the Bible for a country that goes down the road of hating the word of God. The blessings are now curses. Without repentance by the church the nation is doomed.

What I did was post a number of articles showing the magnitude of the destruction coming over America. There is now no letup of the drought and destruction of the crops. America is being turned into a dust bowl with no end in sight. As the homosexual agenda takes root in America, so does the drought with its coming famine on the land. The mega disasters, such as earthquakes, are just waiting to strike. In May when Obama declared his support of “sodomite marriage,” it seems that the judgment was sealed. The church failed to respond, so the nation is now defenseless before the Holy God of Israel.

An Electromagnetic Pulse Catastrophe 08/06/12 As Iran advances both with its nuclear and missile capabilities, an EMP attack is possible. Israel is also capable of such an attack and could launch it against Iran or the coming Islamic caliphate. The combination of natural or manmade disasters is now reaching critical mass. Something big is right around the corner. This article gives very good information.

“An EMP can be generated by a nuclear weapon, any nuclear weapon, detonated above the atmosphere. Or an EMP can be generated naturally, by the Sun sending a solar flare or coronal mass ejection that causes a geomagnetic storm on Earth. In either case, whether the EMP is generated by a nuclear weapon or the Sun, the effects are very similar. An EMP is like a super-energetic radio wave, harmless to people in its direct effects, but lethal to electronics and electronic systems–and everything, including human life, is directly or indirectly dependent upon electronics. The EMP by destroying electronics can collapse everywhere, nationwide, all the critical infrastructures–electric power, communications, transportation, banking and finance, food and water–that sustain modern civilization and the lives of 300 million Americans.”

As the Lord arises in the judgment, the world is about to see His power. Always remember to watch for the timing of these events. When a massive earthquake destroys California, look for what is happening at this time. It just might be the day that “homosexual marriage” is made official or some law of official attack against God’s people. This is how you see the Lord in what is happening. He has been revealing Himself like this for the last several decades, and I believe He will continue to do so until America is destroyed for rebellion against His word. The destruction of America along with the timing of some wicked event will be clear for all to see. God’s judgments are always righteous.

What we do is not fear, but continue to draw close to the Lord Jesus and His word. The sin of America is now at full judgment level, so we ask the Lord for mercy and to guide and protect us from the pending crushing judgments. He will protect those that walk in the fear of Him. To those that fear Him, He will show what is coming. God loves those that walk in the fear of His word and delights in showing them what is coming and how to be protected. Seek Him now as time has just about run out. And above all, do not take your eyes off the Lord Jesus coming for His church. No matter what happens, we live with the Blessed Hope!

Amos 3:7 Surely the Lord GOD will do nothing, but he revealeth his secret unto his servants the prophets. 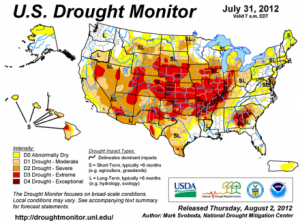 Drought: Farmers dig deeper, water tables drop, competition heats up 08/07/12 As the farmers irrigate their crops, it is lowering the water table and affecting the cities’ water supply. The day is coming when we will have to choose between water for the cities or water for the crops. The drought will ripple beyond the crops and will effect the entire economy.

The effects of the drought are just beginning.

“The US Geological Survey has found central Georgia suffering from long-term ground water depletion similar to that experienced by the Ogallala aquifer beneath Texas and the High Plains aquifer beneath Nebraska and Kansas.”

Dead Crops, Extreme Drought And Endless Wildfires Are Now The New Normal In America There is no letup of the heat and drought. The intense heat started in June which was “homosexual month”.  America is now under the full curse of the LORD for violating His word.

“According to the U.S. Drought Monitor, as of July 31st close to two-thirds of the continental United States was experiencing at least some level of drought. Keep in mind that brown is “severe drought”, red is “extreme drought” and dark brown in “exceptional drought”. This is truly a historic drought.  We have never seen anything like this in modern times in the United States.”

The Mighty Mississippi to Run Dry? 08/07/12 It is very close now in parts to being dry.

“If the Mississippi shut down today, sources quoted by nbc estimate that the direct costs to the economy would be a massive $300 million per day—a cost that would skyrocket exponentially if the river did not reopen after more than a few days! We are still a few feet of water away from that, but the summer isn’t over either.”

Worldwide droughts severely affecting grain crops 08/07/12 Worldwide famine is on the way. Keep your eyes on Jesus at all times and walk by faith.

Big One is a little closer than first thought 08/07/12 I am convinced that when mega disasters like this one hit, it will be directly linked to the homosexual agenda or touching Israel.

“Last week, U.S. scientists in separate studies found that possibility of a megathrust earthquake off the Pacific may be closer than we think. Evidence indicates that such quakes, often measuring more than a bone-crunching 9 on the Richter scale, have happened off our coast every 300 to 600 years on average. The last such quake happened on Jan. 26, 1700. Knowing we hit the 300-year mark 12 years ago has been an uncomfortable piece of data for anyone who cares to ponder such things. And such thoughts have been pretty much restricted to scientists, emergency planners and the few who residents who actually take emergency planning seriously.”

How one major Southern Cal earthquake could become two 08/05/12 Again, with the wickedness of this state, I am sure that the San Andreas fault will rupture in conjunction with some homosexual event. There is a homosexual event coming which will cross the line with the Lord. A rupture of this magnitude will end California as we know it. God is holy and will judge sodomite “marriage”. As the homosexual agenda accelerates, it brings the judgment that much closer.

“Southern California’s long-overdue Big One could easily result in two major quakes, the second triggered by the first at either of the two aforementioned locations. Either or both events could exceed magnitude 8, as recently documented in the record-breaking Sumatra, Indonesia strike-slip quake of April 11, 2012, magnitude 8.6. California’s San Andreas fault is also of the strike-slip variety. Shaking would be severe, and last perhaps as long as five minutes. Significant aftershocks could persist for months, even years. There is increasing evidence that large earthquakes may be related in the sense that one large jolt can significantly contribute to another within a short time frame and distance.”

Earthquake near a major city with death toll ‘unprecedented in human history’ a matter of time 08/08/12 There is now lots of writing about the mega earthquakes. I think they are very close as America has rejected God and is promoting the homosexual agenda.

Ash cloud over New Zealand as giant volcano erupts for the first time in 115 years 08/07/12 This is just one of many volcanoes which are acting up and appear ready to blow.

Was India’s Worst Black Out in Human History Triggered by a Solar Flare? 08/01/12

Monsoon rains swamp Philippine capital, markets shut 08/07/12 There has been massive storms and flooding in Manilla.