Righteousness exalteth a nation: but sin is a reproach to any people. 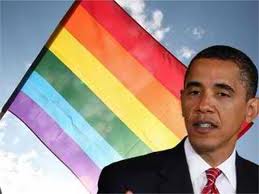 The Ordinance of the Amorites President

If you have not already read my teaching about homosexuality and God’s judgment on a nation, please see Homosexuality vs God’s Holiness. One of the triggers for God’s judgment is when a nation makes homosexuality an ordinance which is a law or custom. I refer to it as the “Ordinances of the Amorites”. This is exactly what America is now doing and it is being led by the President of the United States. It appears the judgment of America is at hand as God’s church is mostly asleep and dead to the coming judgment. God’s church has lost the fear of Him and seems comfortable in this nation as it is now daily being turned into Sodom. The only hope lies with the church crying out to the LORD.

President Obama Celebrates Pride Month 06/01/12 (Video) He mentions two dads and two moms among other incredible statements. He is now leading the charge in creating Ordinances of the Amorites and setting America up to be judged by the Holy God of Israel. How far off can it be when he is trying to force sodomite marriage on the nation?

Obama’s White Base Shows Cracks Compared With 2008 06/12/12 The month he comes out for homosexual marriage and endorses Gay Pride, he starts collapsing in the polls. Maybe, just maybe God will humiliate him and remove him from office in disgrace.

Presidential Proclamation: Lesbian, Gay, Bisexual, and Transgender Pride Month, 2012 06/01/12 Please read the entire document. The quote below is an outline of all the Ordinances of the Amorites which he created. He is proud of this! and right in God’s face with this. No nation can go this far down this road and not expect judgment. It has to come because God is holy. and in the Bible the judgments are decreed on people who do this. The judgment is not future it is now.

“Since I took office, my Administration has worked to broaden opportunity, advance equality, and level the playing field for LGBT people and communities. We have fought to secure justice for all under the Matthew Shepard and James Byrd, Jr., Hate Crimes Prevention Act, and we have taken action to end housing discrimination based on sexual orientation and gender identity. We expanded hospital visitation rights for LGBT patients and their loved ones, and under the Affordable Care Act, we ensured that insurance companies will no longer be able to deny coverage to someone just because they are lesbian, gay, bisexual, or transgender. Because we understand that LGBT rights are human rights, we continue to engage with the international community in promoting and protecting the rights of LGBT persons around the world. Because we repealed “Don’t Ask, Don’t Tell,” gay, lesbian, and bisexual Americans can serve their country openly, honestly, and without fear of losing their jobs because of whom they love. And because we must treat others the way we want to be treated, I personally believe in marriage equality for same-sex couples.”

Notice in the next quote from Obama’s proclamation as he is promoting homosexuality, and it ends with “in the year of our Lord”. What hypocrisy! By using the term “our Lord” he connects the Holy God of Israel with sodomy, and the LORD will have none of it. The boldness of this man to promote sin is without measure!

“NOW, THEREFORE, I, BARACK OBAMA, President of the United States of America, by virtue of the authority vested in me by the Constitution and the laws of the United States, do hereby proclaim June 2012 as Lesbian, Gay, Bisexual, and Transgender Pride Month. I call upon the people of the United States to eliminate prejudice everywhere it exists, and to celebrate the great diversity of the American people.

IN WITNESS WHEREOF, I have hereunto set my hand this first day of June, in the year of our Lord two thousand twelve, and of the Independence of the United States of America the two hundred and thirty-sixth.”

Military religious leaders report pressure, backlash over beliefs 05/04/12 I said all along that the Hard Left reprobates would force homosexuality on the military chaplains. They will force the godly out and promote only chaplains of the Hard Left. This is for sure.

Army Chaplain Performs First-Ever Military Same-Sex Nuptial Ceremony in Chapel at Fort Polk in La. 06/06/12 Nothing will now stop the reprobates. This is an Ordinance of the Amorites in the US Military, which means that God’s judgment is now clearly aimed at the military.

“An Army chaplain has performed the first same-sex nuptial ceremony on a military base–one involving two lesbian soldiers. The ceremony took place in Louisiana, a state where same-sex marriage is not legal, so it is being described as a “religious” ceremony only.”

May Budget Deficit Up From Year Earlier  06/12/12 The US economy is collapsing during Gay Pride Month. God is in the process of slowly grinding Americans into poverty for promoting homosexuality. An economic curse is now hanging over the nation. He is doing the grinding slowly, waiting for His church to arise and cry out in repentance and an outpouring of His Holy Spirit. Every Friday night on my blog talk radio show I cry out in repentance. All are welcome to join.

The G.O.P.’s Gay Trajectory  06/09/12 For all you that may still think America can be saved by politics, please read this article. The Republican Party led by Romney is now promoting the homosexual agenda. They will take our votes but not our agenda. Many have become reprobates and want nothing to do with the righteous. They will turn on us in favor of the homosexuals. America is now almost dead politically. The following is about one of the largest donators to the Republican party.

“Now, Singer says, he’s providing $1 million to start a new “super PAC” with several Republican compatriots. Named American Unity PAC, its sole mission will be to encourage Republican candidates to support same-sex marriage, in part by helping them to feel financially shielded from any blowback from well-funded groups that oppose it. In an interview on Tuesday, he told me that he’s confident that in Congressional races, which would most likely be the super PAC’s initial focus, there are more than a few Republicans “who could be on the verge of support” or are “harboring and hiding their views.”

The American Dream Shrinks: Avg. Net Worth Falls 40% From 2007-2010 06/12/12 The economy will never recover until there is national repentance and crying out to the Holy God of Israel. It is very sad to watch this as so many of God’s people are powerless or anesthetized to what is happening.

Calif. “Church” Erects Billboard in NC Apologizing for Gay Marriage Ban 06/03/12 What could be added to this?

This Speaks For Itself

US Lawsuit challenges US state’s gay marriage ban 05/30/12 The Hard Left reprobates are energized by hell and will never give up. They cannot be defeated politically as hell is now out in the open. Remember this, the end game of theirs is to destroy anything of God including those that believe in Him. They are coming after us just as the Nazi’s end game was the Jews. They loath us with the same hatred the Nazis had towards the Jews.


US Economy Faces ‘Tough’ Times Ahead 06/12/12 America is now in the zone of no economic recovery. As the nation goes deeper into the sin, the economic collapse will accelerate until America becomes a third world economy.

US Conservative Jews approve gay weddings 06/02/12 Tampering with the sanctity of marriage is the trip wire for God’s judgment.

Colorado wildfire: Woman, 62, dies in High Park fire, which continues to grow 06/12/12 We need to watch for natural disasters hitting this month and especially toward the end of the month as “Gay Pride Day” approaches which is June 24.


Proverbs 16:18 Pride goeth before destruction, and an haughty spirit before a fall.