Islamic Caliphate Forming With Attack on US Embassies

They have said, Come, and let us cut them off from being a nation; that the name of Israel may be no more in remembrance. (5) For they have consulted together with one consent: they are confederate against thee:

Many times on this blog I wrote about the “marriage” between the Hard Left Fascists and Islam. I likened it to Hitler and Stalin signing a peace pack just prior to World War 2, and then Hitler turned on Stalin. This is what I said would happen between the Hard Left and Muslims. I also said that the Muslims would win in the end, going head-to-head with the Hard Left. 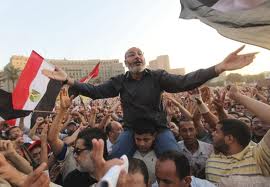 What is so shocking about this is how soon it happened. Morsi was just installed as president of Egypt in late June. He just gained control of the army and now this attack! The Muslim Brotherhood is energized and ready to advance the Islamic caliphate. There is no turning back as the Muslims are bringing the war to us. Their target is Israel and taking Jerusalem. They want Jerusalem as the capital of their caliphate. This is the Psalm 83/Obadiah war that I warned was coming. It is here now. I think we may look back and see the war started on this day.

What just happened reminded me of how the Iranian revolution under Jimmy Carter led to Ayatollah Khomeini coming to power and the Islamic state of Iran. Now the same has happened under Obama.

The Muslims are now in a frenzy to take Jerusalem. It appears this is all they can think of. They are now insane in their blindness to attack Jerusalem. The thought of the Jews controlling Jerusalem has driven them mad.

Jerusalem to become Egypt’s capital under Mursi’s rule, says Muslim cleric 06/07/12 (Video) If you have not already seen this you MUST. This tells you in the Muslim Brotherhood’s own words, the coming battle over Jerusalem. Morsi was at this meeting and is sitting directly behind the speaker. This what he had to say:

“Our capital shall not be Cairo, Mecca or Medina. It shall be Jerusalem with God’s will. Our chants shall be: ‘millions of martyrs will march towards Jerusalem’

“The United States of the Arabs will be restored on the hands of that man [Mursi] and his supporters. The capital of the [Muslim] Caliphate will be Jerusalem with God’s will

“Yes, we will either pray in Jerusalem or we will be martyred there,”

They are not joking in anyway. This is real Islam rising and organizing to attack. They want to takeover the world. Because they do not believe the Bible, they are all going to die.

They are about to run directly into the Holy God of Israel and His holiness. The world is now looking at one of the greatest bloodbaths in history: the destruction of Islam. The destruction that is coming is so great that people are going to think this battle was Armageddon, but it is not. Entire Arab countries are going to disappear.

Israel is going to be left standing and this will directly start God’s end time prophetic plan. This war is the trigger for Armageddon.

The time is now at hand, the day of battle has arrived. The God of Israel is arising like a mighty man of war.

The world is going to see the power of the Holy God of Israel. They will understand the authority of His word when Islam is smashed.

Please, in the short time remaining, draw closer to the Lord. Stay focused on the Lord Jesus coming for His church. Stay in prayer and ask God to use you as a powerful witness for the Lord Jesus Christ. What the ancient Bible prophets wrote is about to come to pass.

What we are also going to see is a clear understanding of end time prophecy. The real understanding is about to be made clear to everyone.

My position is that Islam is about to be destroyed and the end time religion will not be Islam but good old fashion paganism. I base this on Psalm 83, Obadiah and many other verses.

No matter what happens, stay locked on to the coming of the Lord Jesus because the ride is about to get real rough.