That men may know that thou, whose name alone is JEHOVAH, art the most high over all the earth. 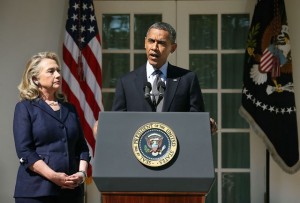 The Dynamic Duo who helped create the Muslim Brotherhood and Islamic Caliphate!

The events in the Middle East are now exploding. What happened shows the power of the Muslim Brotherhood. They are gaining more power every day. Obama helped create this monster, and now it is starting to eat him.

The Muslims used the Hard Left Fascists much the same way that Hitler used Stalin just prior to WW2. When he was finished using Stalin, he then attacked Russia. It appears that the Muslims have used Obama to get into power and now they turned and killed the US Ambassador and rioted all over the Middle East! They do not need Obama or Clinton so they murdered and rioted. This is just started as it might quiet down for a time, but they will be back with more power.

Remember and never forget, that the Muslims’ target is destroying  Israel and taking Jerusalem. Jerusalem is now God’s anvil and Islam will be smashed to pieces.

Israeli Foreign Ministry: U.S. ignored Arab radicalization 09/16/12 The US ignored it because they were helping it! This is what Obama and Clinton created. They are helping to create the Islamic caliphate that God is going to destroy. God used their rebellion against Him to help create the confederation of Psalm 83 and fulfill His word: amazing that Obama and Clinton with all the rebellion, were tools of God that He might make His nightly power known.

“The Obama administration, which since the beginning of the Arab Spring has aided, directly or indirectly, the forces that brought down the dictatorial regimes in Egypt, Tunisia, Yemen and Lybia, now finds itself in a position of helplessness. The attack on the consulate in Benghazi, in which the U.S. ambassador to Libya, Christopher Stevens, was killed, and the storming of the U.S. embassies in Tunis, Sanaa and Cairo, proved the great hostility to the United States and the unwillingness of these country’s new leaders to challenge domestic public opinion.”

Gulf states see Obama’s hand in rise of Muslim Brotherhood  09/13/12 The Muslims know what Obama and Clinton did! America created the monster that is now growing and will soon be unleashed against Israel and the world. This is why I say incredible bloodshed is coming as Islam will not go down easily. This war is going to spread to wherever the Muslims are found, including Europe and America.

“Today the Americans are mobilizing the Muslim Brotherhood in the Arab nation, for the benefit of America, not the Arabs,” Brig. Gen. Dhahi Khalfan, regarded as the security chief of the United Arab Emirates, said. “There is an American plan that has been drawn up for the region.”

The coming of the Lord Jesus for His church must be very close. Time is running out as we see the opening war that leads to Armageddon running to blow. The fuse is about to be lit. If Israel would postpone the attack on Iran, for how long until the next encounter, a few months at the most.

1 Thess 3:13 To the end he may stablish your hearts unblameable in holiness before God, even our Father, at the coming of our Lord Jesus Christ with all his saints.

US warned before attack 09/16/12 I believe this because the Hard Left like Clinton and Obama do not live in reality. They live in their own little make-believe world where whatever they say and think must be true. Clinton just met reality in the Middle East with Muslims. They will kill homosexuals when they can. This is real Islam.

Why did the State Department send a Gay man to be Ambassador in a homophobic Muslim country? 09/15/12 This is a mind-boggling article about Ambassador Stevens being a homosexual. I believe that he was a homosexual because of the manner in which the Muslims killed him.

” … incredulous that the U.S. State Department would appoint a gay man as ambassador to a Muslim country, especially now that it has come out that the Muslims who murdered Stevens also raped him repeatedly, before and after his death.”

Ambassador Stevens was a Friend of Hamas! 09/13/12 I am learning a lot about Stevens. He was hard core, Hard Left and was the front man for Obama in dealing with the rebels in Libya. He helped overthrow Qaddafi and then was killed in the exact manner that Qaddafi was murdered by the same people! I said over and over that the Muslims would use the Hard Left and then turn on them.

“It should be noted that the late Ambassador Chris Stevens was murdered by the very extremists he helped put in power. Stevens wasn’t just an Islamo-pandering cheerleader, he dedicated his career to romanticizing, whitewashing, aiding, abetting, and enabling Islamic extremism … It confirms that the far-left Stevens was the liaison for the Obama administration to the Libyan rebels. He was a big part of the Obama plan to remove Qaddafi (with whom we had a de facto peace and an agreement pursuant to which he gave up all weapons of mass destruction) from power and install these animals in his place …”

The reign of imagination 09/13/12 This is a great article; make sure that you read it.

Arab Protesters in Akko: Only Islamic State Can Calm the Rage 09/14/12 Muslims in Israel calling for a caliphate.

“Arab protesters in the northern Israeli city of Akko say that “only a large and strong Muslim state can calm the rage.”

General asks preacher not to back anti-Muslim film 09/12/12 This is surreal! Does he actually think that this video caused this! The top general in America calls a pastor not to promote a video so as not to offend Muslims!

“The chairman of the Joint Chiefs of Staff asked a Florida preacher Wednesday to withdraw his support of the anti-Muslim film blamed for fueling the fatal attack on the U.S. Consulate in Benghazi, Libya. Gen. Martin Dempsey called Terry Jones, who is known for inflammatory anti-Islamic rhetoric, to express his concerns about the film, saying it could spike tensions and trigger violence.”

Hurting Muslims’ Feelings ‘Cannot Be Tolerated,’ Egypt’s Ruling Party Says 09/13/12 This is the problem for the Muslims. “Hurting their feelings” means them hearing the truth about Muhammad. They go crazy when the truth about their “prophet” goes public. It is “disgusting” say the Hard Left to say these things about Muhammad, when yet it is true! They condemn Muhammad by their comments about the truth of him. The liberal world is utter confusion and fantasy.

Opposing view: Why ‘Sam Bacile’ deserves arrest 09/14/12 The Hard Left Fascists are now beating the drum to go after the First Amendment freedom of speech. They are really dumb people thinking that the movie caused this!

Hillary Clinton Defends Murderous Outrage: “Islam is a Great Religion” 09/13/12 This is yet another example of how dumb these people are. It is like Neville Chamberlain of Great Britain calling Hitler a man of peace. Seriously, I am never amazed at how dumb the Hard Left is.

World Community Takes On ‘Islamophobia’ 09/11/12 After what just happened, how can they go forward to protect Islam from “Islamophobia”.  We have a right to be afraid of the Muslims.

Imam urges UN to issue law banning insulting symbols of Islam 09/15/12 This is trying to put the entire world under Sharia law!

Suspected anti-Islam filmmaker questioned by federal probation officers 09/15/12 Sharia law in action in America! This is very serious as the US now has Muslims or their sympathizers in power.

How Syria Might Unleash War between Israel and Iran 09/12/12 There are many ways to spark the war.

Turkish PM: “No Peace Unless Hamas is Free”  09/15/12 Hamas exists for the purpose of destroying Israel. This is like war against Israel.