Luke 18:8  …Nevertheless when the Son of man cometh, shall he find faith on the earth?

The foundation of America is melting away exactly like it happened in Europe. At the present course, what we see that has  happened to Europe will happen to America.

Huge numbers of younger Americans have abandoned the authority of the Bible and the faith. If a person claims to be a Christian, yet condones and supports homosexuality, and even worse “homosexual marriage,” in reality what really is his faith? This is the road to apostasy, that soon will be a complete rejection of Christianity.

The foundation is really rotten. What we are now witnessing is several generations of powerless preachers who were afraid to stand for the truth. Well, their fruit is evident in the young abandoning the faith in massive numbers.

We need a real revival in America to survive. In reality, it is revival for survival. If there is no revival, the future of America is that it will be brought under the homosexual agenda and Islam. Real Christians then will be the enemy of the state. There is no other option since the sinful rejection of the Bible as the foundation of America dictates the future.

Psalm 9:17  The wicked shall be turned into hell, and all the nations that forget God. 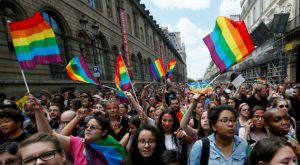 Days of Lot: New Survey Finds That Evangelical Christian Support for Gay Marriage Has More Than Doubled 06/29/17  The article is reprinted in full, below.

“A new survey just released by the Pew Research Center has found that support for gay marriage in the United States is at an all-time record high. According to the survey, 62 percent of all Americans are now in favor of allowing gays and lesbians to get married, and only 32 percent are opposed. These numbers have almost flipped completely upside down from where they were a decade ago. In 2007, 54 percent of all Americans were against gay marriage and only 37 percent were in favor of it. To say that our culture has been transformed over the past ten years would be a major understatement.

One of the biggest shifts that we have seen has been among evangelicals. This brand new survey discovered that support for gay marriage among white evangelicals has more than doubled since 2007…

Support for same-sex marriage has risen across all religious groups in recent years, including among white evangelicals and black Protestants. Support for same sex-marriage among white Evangelicals has more than doubled compared with a decade ago (14 percent then, 35 percent now), while the share of black Protestants who favor same-sex marriage has increased from 24 percent in 2007 to 44 percent today.

In particular, the shift in favor of gay marriage among evangelicals has been most noticeable among young people. Today, a staggering 47 percent of all white evangelicals born after 1964 favor gay marriage…

I honestly don’t know how this is possible.

How in the world did we get to the point where nearly half of all evangelicals born since 1964 have abandoned what the Word of God says about marriage?

As this massive cultural shift continues, it is going to become increasingly difficult for those that still want to try to stand up for traditional values.

Already, we have gotten to the point where no Bible-believing Christians will be able to participate in the wedding industry because the risk of getting slapped with a very costly lawsuit is just too great. One of these cases is headed to the Supreme Court, and so let us be praying for a positive outcome:

Jack Phillips and his Masterpiece Cakeshop in Lakewood, Colorado, had never had problems before with homosexual customers. That changed when the Christian owner refused to create a cake to celebrate a same-sex marriage, the business landed in deep legal trouble with the state.

It pits Phillips’ religious rights against the rights of a gay couple to receive the same and equal treatment under the law as heterosexual couples.

Today, the average American watches approximately five hours of television a day, and more than 90 percent of the news and entertainment that we watch is controlled by just six gigantic media conglomerates. All of those media giants are relentlessly advancing a pro-gay agenda, and we need to realize what is being done to us.

If you allow anyone to feed “programming” into your mind for five hours a day, it is going to have a major impact on how you view the world.

This is particularly true of the next generation. Our children are being raised to fully embrace the social agenda of the radical left, and eventually, they are going to become the leaders of tomorrow.

Our hearts should break when we read about young kids such as 9-year-old Audrey Cisneros:

But Audrey is realizing it’s not an easy thing for people to understand—especially her fellow fifth-graders. Here’s how she puts it:

“A drag show is a very, very fun and special event where people can express themselves for who they really are, and show it to everyone that is in the room. You don’t judge people just because they dress up as the opposite gender or because they love someone of the same gender. Just be proud of them, don’t fight it.”

On Saturday, Audrey and other children attend a drag queen story hour hosted by My LGBT Plus. Similar events have been held across the country, aiming to familiarize kids with the gay community and give them “glamorous, positive and unabashedly queer role models.”

On the other hand, children all over the country are being banned from bringing Bibles to school or gathering for group prayer.

Eventually it will get to the point where our children can’t even say grace before a meal. If you doubt this, just check out what is happening in Sweden:

Children at a Christian preschool in Sweden are no longer allowed to say grace at mealtimes, “Amen”, or talk about the Bible, after a ruling by the Umeå municipality.

Visiting the preschool for an inspection, supervisors from the district said the activities run contrary to the Education Act, which forbids educational content during school time from containing confessional elements, and states that children at must always have the choice of whether or not to participate.

The municipality said it felt that children at the Salvation Army-run kindergarten were not given enough of an opportunity to opt out of saying grace at mealtimes.

When I say that the radical left wants to eradicate our way of life, I am not exaggerating one bit.

The left does not believe in free speech and the marketplace of ideas. Instead, they believe in hate speech laws and using the legal system as a tool to punish those that do not see things the same way that they do.

Slowly but surely, they are going to criminalize the belief systems of those that disagree with them.

Meanwhile, much of the evangelical church is silent on these issues. Many leaders are concerned that if they do speak out that attendance will go down and offerings will not be as large as they were previously.

If evangelical churches had been boldly proclaiming the truth all this time, support for gay marriage among evangelicals would not have doubled over the past decade.

If we want America to repent and turn in a positive direction, it begins with us, and it is about time that we got started.”

2 Peter 2:6-8  And turning the cities of Sodom and Gomorrha into ashes condemned them with an overthrow, making them an ensample unto those that after should live ungodly; And delivered just Lot, vexed with the filthy conversation of the wicked: (For that righteous man dwelling among them, in seeing and hearing, vexed his righteous soul from day to day with their unlawful deeds;)