Proverbs 4:16-17  For they sleep not, except they have done mischief; and their sleep is taken away, unless they cause some to fall.
For they eat the bread of wickedness, and drink the wine of violence.

It appears that now Chicago is coming within reach of North Korean missiles. The question is, can these missiles carry a nuclear warhead? Can we make it to the end of the year without war with NK?

It seems that right now anything could trigger WW3. There is no doubt that China is going to join the war in support of NK.

The way it looks now is that the war in the Pacific will be China with NK vs the USA, Japan, Taiwan, Australia and possibly India. I really believe that at some point nukes will be used. Right now the US is practicing heavy bomber attack runs at NK.

Ephesians 5:8  For ye were sometimes darkness, but now are ye light in the Lord: walk as children of light: 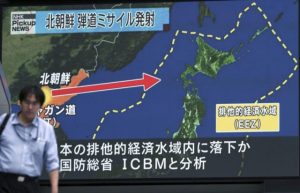 Zechariah 9:10  And I will cut off the chariot from Ephraim, and the horse from Jerusalem, and the battle bow shall be cut off: and he shall speak peace unto the heathen: and his dominion shall be from sea even to sea, and from the river even to the ends of the earth.

“North Korean leader Kim Jong Un said Saturday the second flight test of an intercontinental ballistic missile demonstrated his country can hit the U.S. mainland, hours after the launch left analysts concluding that a wide swath of the United States, including Los Angeles and Chicago, is now in range of North Korean weapons.
The Korean Central News Agency said that Kim expressed “great satisfaction” after the Hwasong-14 missile reached a maximum height of 3,725 kilometers (2,314 miles) and traveled 998 kilometers (620 miles) before accurately landing in waters off Japan. The agency said that the test was aimed at confirming the maximum range and other technical aspects of the missile it says was capable of delivering a “large-sized, heavy nuclear warhead.”
Analysts had estimated that the North’s first ICBM on July 4 could have reached Alaska, and said that the latest missile appeared to extend that range significantly.
Immediately after the launch, U.S. and South Korean forces conducted live-fire exercises. South Korean Defense Minister Song Young-moo called for the deployment of strategic U.S. military assets — which usually means stealth bombers and aircraft carriers — as well as additional launchers of an advanced U.S. anti-missile system.”

US, allies prepared to use ‘overwhelming force’ in North Korea, general says 07/30/17

Matthew 24:7  For nation shall rise against nation, and kingdom against kingdom: and there shall be famines, and pestilences, and earthquakes, in divers places.

“The U.S. and its allies are prepared to use “rapid, lethal and overwhelming force,” if necessary, against North Korea, the commander of the U.S. Pacific Air Forces warned Saturday night.
The statement from Gen. Terrence J. O’Shaughnessy, U.S. Pacific Air Forces commander, came after the militaries of the U.S., South Korea and Japan spent 10 hours conducting bomber-jet drills over the Korean Peninsula.
The training mission was a response to North Korea’s recent ballistic missile launches and nuclear program, and part of the U.S. regular commitment to defending its allies in the Asia-Pacific region, the general’s statement said.
“North Korea remains the most urgent threat to regional stability,” O’Shaughnessy said.”

Colossians 3:5  Mortify therefore your members which are upon the earth; fornication, uncleanness, inordinate affection, evil concupiscence, and covetousness, which is idolatry: (6) For which things’ sake the wrath of God cometh on the children of disobedience: 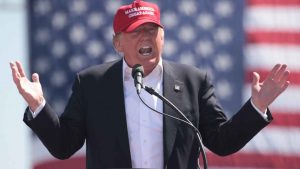 THE TRUMP EFFECT 07/29/17  This is a great article and really made me think! He is destroying the politically correct thinking and freeing Americans’ minds!

Colossians 1:13  Who hath delivered us from the power of darkness, and hath translated us into the kingdom of his dear Son

“Six months into the Trump presidency, it seems safe to say that America has never had a political experience like the one he has brought to the White House. He has sparked a stark raving mad #resistance from the left that makes Bush Derangement Syndrome look fair and balanced. The news media hang on his every tweet. Hollywood is practically self-combusting in panic and disbelief. Climate change Cassandras are melting down. Illegal aliens are feeling the heat as well. He has even thrown his own party into turmoil. All of this hysterical disarray has resulted from the impact not of a movement or a Party, but of one man, Donald Trump.
Now a new documentary offers some thoughtful commentary on President Trump’s agitating arrival on the political scene. Produced, directed and edited by Agustin Blazquez, The Trump Effect: Deprogramming the American Mind features author and filmmaker Laurence Jarvik musing upon the rise of Trump and how this iconoclastic President is changing the way Americans think about ourselves and the world. Over the course of an hour of discussion, Jarvik’s primary thesis is that Trump is dismantling the politically correct ideology that has dominated American political discourse since 9/11, which will lead the way to a newfound freedom and unification of a country on its way to becoming great again.” 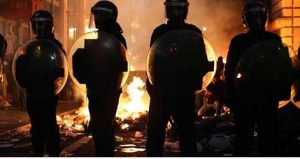 ‘Black Lives Matter’ Riots in London, Police and Public Attacked 07/29/17  (VIDEO)  The reason I am reporting this is how quiet BLM are in America! There has not been a riot involving them is a long time. I thought for sure there would be BLM riots all summer long, but no, they are very quiet!

“Molotov cocktails, fireworks, and bottles have been hurled at police during a ‘Black Lives Matter’ riot in East London following the death of an alleged drug dealer.
Rashan Jermaine Charles, 20, died in hospital after being apprehended by police in Dalston, Hackney on the 22nd of July. He was attempting to flee a shop while swallowing a stash of drugs when tackled by officers, according to reports.
Following the death, masked activists bearing ‘Black Lives Matter’ placards shut down Kingsland Road, set fire to bins and mattresses, and even attempted to storm a passing lorry, the BBC reports. Shop windows were also smashed, graffiti painted on buildings, and late-night businesses forced to close their doors.” 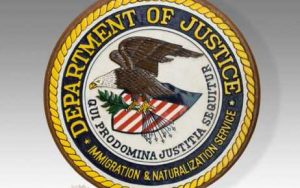 Dept of Justice Begins Sanctuary City Crackdown in Earnest 07/29/17  Americans are literally dying from the insane policies of the Hard Left. I have said many times that the Hard Left reprobate mind is the most destructive force on earth. It is even worse than Islam!

Psalm 145:20  The LORD preserveth all them that love him: but all the wicked will he destroy.

“Attorney General Jeff Sessions announced Tuesday that sanctuary cities around the U.S. must give immigration officials more access, or else they’ll lose millions of dollars in DOJ grants.
Sessions said sanctuary cities will be punished for not communicating with ICE (U.S. Immigration and Customs Enforcement) officials or allowing them access to inmates in jails or failing to announce the release of criminal aliens, according to a release from the Center for Immigration Studies.” 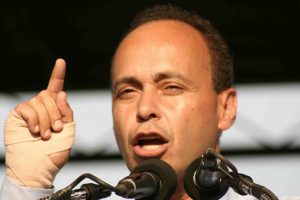 Dem Rep Luis Gutierrez Calls Trump A ‘Major Criminal,’ Must Be ‘Eliminated’ 07/28/17  The Hard Left’s minds are so darkened that they will push until there is a civil war in America. Whatever is against God, they are for.

“U.S. Representative Luis Gutierrez (D-Ill.) is a very gifted public speaker. If he chose to use that gift for good, he could make a tremendous difference in this country. But instead, he is using his gift to encourage people to hate President Trump. During a recent appearance at Chicago’s Lincoln United Methodist Church on Saturday, Gutierrez actually referred to Trump as a “criminal” multiple times…
“The major criminal that exists in the United States of America is called Donald Trump [and] he lives at 1600 Pennsylvania Av at the White House,” Gutierrez stormed. “Someone who takes health care away from 33 million people is a criminal,” he said.”

Berkeley Radio Station Enforces Sharia, Cancels Richard Dawkins Over Comments on Islam 07/28/17  When it comes to Islam and the Muslims, the Hard Left will support them even against fellow Hard Left people. The real Hard Left is falling in line with the Muslims. They both have the same spirit of hating God, the Bible and America. The are of a kindred spirit with satan, and it is showing.

1 John 4:1  Beloved, believe not every spirit, but try the spirits whether they are of God: because many false prophets are gone out into the world.

“Richard Dawkins and other leading atheists have hit out at a California radio station after it canceled an event upon learning of the scientist’s controversial views on Islam.
Dawkins was supposed to speak at an August event about his memoir, A Brief Candle in the Dark, hosted by Berkeley’s KPFA radio station.
But in an email, which Dawkins published on his blog, the station informed ticketholders that the event was canceled.
“We had booked this event based entirely on [Dawkins’s] excellent new book on science,” the email read, “when we didn’t know he had offended and hurt—in his tweets and other comments on Islam—so many people.” 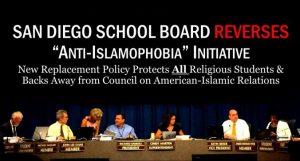 San Diego School District Rescinds Anti-Islamophobia Initiative After Citizen’s Fight Back 07/28/17  This is great news and shows what can happen when the people stand up against Islam being forced on us!

“Last night, San Diego Unified School District’s (SDUSD) Board of Education overturned its “anti-Islamophobia” bullying prevention initiative and adopted a new program entitled “No Place for Hate,” which was developed by the Anti-Defamation League and will focus on protecting students of all religious beliefs. In addition, the Board voted to back away from another formal partnership with the Council on American-Islamic Relations (CAIR). The Board’s reversal is a response to a federal civil rights lawsuit filed by the Freedom of Conscience Defense Fund (FCDF) on behalf of five families and two organization that challenged the initiative’s constitutionality.
On April 5, 2017, the Board approved an Anti-Islamophobia initiative purportedly to combat the bullying of Muslim students. Among other benefits, the initiative instructed teachers and staff to promote Muslim culture, create safe spaces for Muslim students, and vet and revise curricula to ensure a more “positive” and “inclusive” portrayal of Islam. In addition, the initiative sought to formalize SDUSD’s longtime collaboration with CAIR, and it authorized the group to provide training materials, teach students about Islam during class time, and pass out religious materials.” 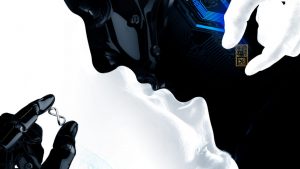 Supersapiens, the Rise of the Mind 07/29/17  This article is about a movie. I believe that often a movie shows us what is coming; it is predictive programming. This is very interesting because the producer bases the new mind on evolution!

What I see happening is man playing God as they want to create an advanced human and live without God. This is man becoming the creator! God refers to man’s creation as the “Image of the Beast.”

“In the new film Supersapiens, writer-director Markus Mooslechner raises a core question: As artificial intelligence rapidly blurs the boundaries between man and machine, are we witnessing the rise of a new human species?
“Humanity is facing a turning point — the next evolution of the human mind,” notes Mooslechner. “Will this evolution be a hybrid of man and machine, where artificial intelligence forces the emergence of a new human species? Or will a wave of new technologists, who frame themselves as ‘consciousness-hackers,’ become the future torch-bearers, using technology not to replace the human mind, but rather awaken within it powers we have always possessed — enlightenment at the push of a button?”
“It’s not obvious to me that a replacement of our species by our own technological creation would necessarily be a bad thing,” says ethologist-evolutionary biologist-author Dawkins in the film.”

2 Samuel 22:3  The God of my rock; in him will I trust: he is my shield, and the horn of my salvation, my high tower, and my refuge, my saviour; thou savest me from violence.