This article really shows how vicious the Hard Left mind is to corrupt children. It is hard to shock me anymore, but this article did. This reprobate mind was literally like a wolf after a little lamb! The teacher should be put in jail for child abuse.

Genesis 5:1,2 This is the book of the generations of Adam. In the day that God created man, in the likeness of God made he him; Male and female created he them; 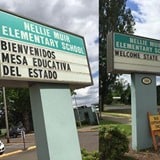 “The parents of an elementary student suing the Woodburn School District for almost a million dollars say a second-grade teacher kept their son from recess and educated him without their permission about being transgender.

The lawsuit filed in Marion County Circuit Court accuses the school of false imprisonment, negligence and the intentional infliction of emotional distress.

The student was 8 years old when his teacher, after noticing the boy used the staff bathroom, pulled him aside, kept him from recess and showed him videos and books “in an effort to promote (him) becoming transgender,” according to the complaint.

The then-second grader at Nellie Muir Elementary School and his parents had made arrangements with the school for him to use the staff restroom because of a digestive-related medical condition. His teacher assumed the boy was not comfortable using the public boys’ restroom because he was transgender, according to the lawsuit.”

Can This be True ? 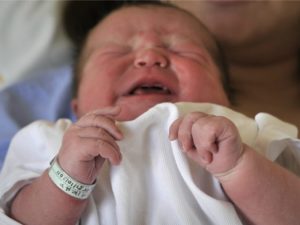 “University of North Texas Course Teaches Students About ‘Sexual Pleasure’ for Infants” Sexual perverts have reached high levels in academia and are using their position to advance their perversions.
They are cloaking their lust in “science”. Young children don’t notice sex until they get older.
I remember when I was a youngster the boys didn’t want girls on their team because they couldn’t throw a baseball!
The reprobate mind wants to get at the young children so they can turn them into reprobates.

Matthew 24:37 But as the days of Noah were, so shall also the coming of the Son of man be.

“A human sexuality course at the University of North Texas asks enrolled students to observe “sexual interactions” in young children. The class also included a presentation titled “Sexual Pleasure and Response in Infants.”

A report from The College Fix revealed that a course at the University of North Texas is taking a bizarre stance on the sexuality of young children. The course, which is entitled “Psychology and Sexual Behavior,” has been criticized for an alleged lesson on “sexual pleasure” in “infants.” Photos from the classroom show a PowerPoint presentation with the title “Sexual Pleasure and Response in Infants.”

Needed in the Deep State 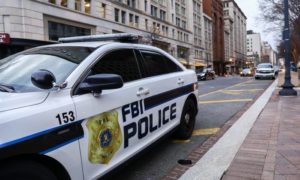 “Multi-State Child Exploitation Operation Busted; 82 Arrested, 17 Children Rescued” This type investigation is needed in the deep state, Hollywood and the media to clean out the rat’s nest.
I am thankful to the Lord for uncovering this ring.

“An investigation into the possession and distribution of child pornography covering eight southeastern U.S. states culminated in the arrest of 82 people and the rescue of 17 child victims, according to the Georgia Bureau of Investigation (GBI). 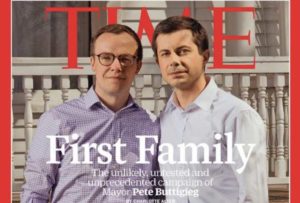 Isaiah 5:18 Woe unto them that draw iniquity with cords of vanity, and sin as it were with a cart rope: (19) That say, Let him make speed, and hasten his work, that we may see it: and let the counsel of the Holy One of Israel draw nigh and come, that we may know it! (20) Woe unto them that call evil good, and good evil; that put darkness for light, and light for darkness; that put bitter for sweet, and sweet for bitter

“Time Magazine has featured Democratic presidential candidate Pete Buttigieg and his “husband” Chasten Glezman on its May cover, with the large-lettered headline “First Family.”

The print version is expected to roll out on May 13, but the article itself is currently available on the outlet’s website. The report gives significant attention to Buttigieg’s homosexuality, and refers to the candidate as a “happily married Christian veteran.”

“His youth is appealing to many voters, but it also means he’s green. The idea of electing the first gay president thrills liberals, but it also rallies opponents,” writes reporter Charlotte Alter.” 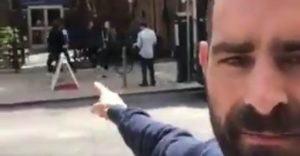 “UPDATE: Pennsylvania Democrat Lawmaker Offers $100 to Doxx Pro-Life Minor Teenagers (VIDEO)”I’m from PA and called my representative about Rep Sims.
I also called his office and left a message.

Sims harassed the woman for eight minutes in his Periscope video calling her “an old white lady” and then adding, “Shame on you. What you’re doing here is disgusting!”

But this wasn’t far enough for Sims – he went back to Planned Parenthood and harassed pro-life minors, calling them “pseudo-Christians.” This time, Sims offered $100 to identify (doxx) the minor pro-life advocates standing outside of Planned Parenthood.

“I’ll give you $100 if you can identify any of these three,” Sims said as he panned around and pointed his phone camera to minor teens. Sims them walked over to another young man and said, “It would be easier if you just gave me your name and your address.”

Sims is a Democratic member of the Pennsylvania House from the 82nd district. He is an openly gay Democrat.

“Pedophilia Being Taught As “Sexual Orientation” in California Schools”
I told you this was coming, but I did not realize this fast! The reprobate mind is classifying it as “sexual orientation”! I’m sure they were doing this in Sodom before the Lord destroyed it.

“Government school officials in California think it is “really important” to teach children about pedophilia and pederasty in the classroom because it is a “sexual orientation.” That is according to a top official for California’s Brea Olinda School District, who admitted to parents that it was being done — and that it would continue, despite the outrage. The implications are mind-blowing.

The stunning admission came after a parent-information meeting last month for the Brea Olinda Unified School District (BOUSD). Stephanie Yates, founder of Informed Parents of California, asked school officials why they were “teaching pedophilia in school to 9th graders.” But instead of a denial that such an atrocity was taking place, a top school official confirmed it was happening and acted like there was nothing wrong with it.

“This is done because we are talking about historical perspectives of how gender relations and different types of sexual orientations have existed in history,” said BOUSD Assistant Superintendent of Curricula Kerrie Torres in a matter-of-fact way, sounding almost oblivious to how the bombshell might sound to normal people.” 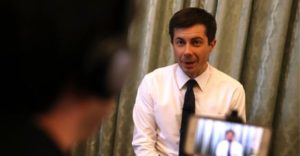 “Buttigieg: I Welcome Debate with Trump on Who Has a More Traditional Attitude on Marriage” He calls is partner his husband. Are they both husbands to each other? This sounds like confusion to me.

“Saturday on MSNBC, South Bend, IN Mayor Pete Buttigieg, a likely 2020 Democratic presidential candidate, said he would welcome a debate with President Donald Trump over which of them holds a more traditional view of marriage.” 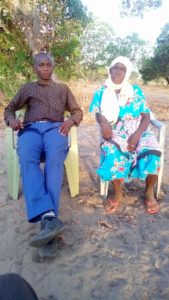 Hello brother and our Chaplain John! I hope you are doing very well. I have been listening to your teachings, you’re a great teacher and I have loved the way you teach the truth. May the Lord bless your Ministry.

I am doing very well well here. One of the Muslim women by the name Sofia Umar came to Christ recently after one of my students shared with her the gospel of Christ Jesus. Sofia is now so excited in Jesus! I would need your prayers as we nature her in the teaching of Christ and the protection from her family members.

Again I will be in Nairobi Kenya on 6th May for four days meeting. If you would send those open Bibles and other materials to Pastor Zaphaniah, I would take back to my place and help my students.

I am so, so excited to be part of the the Abba Father international fellowship. May God bless you. Pastor E