The above members of the Obama administration reflect him. It is clear, with advisers like these, why the military will not stand for any opposition to their agenda. Think of the danger to Americans with people like this controlling and influencing the military! With the power of the US Army behind them, they could terrorize any resistance to their agenda and takeover of America.

The direct attack on American people started last August when Lt. Gen. Thomas P. Bostick, the Army’s deputy chief of staff in charge of personnel matters, spoke to 500 soldiers about the repeal of “Don’t Ask Don’t Tell”  at the European Command headquarters in Stuttgart, Germany. The general did not mince this words but laid out exactly what was going to happen to anyone in the army, from private to general, who did not go along with the homosexual agenda. He is in the position to know what was going to happen as he is a policy maker!
General Bostick 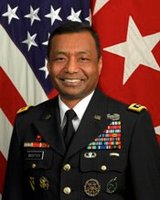 Top general calls Christian soldiers ‘bigots’ 09/16/10 “Those serving who oppose the lesbian, gay, bisexual and transgender (LGBT) agenda are no longer welcome.” Unfortunately, we have a minority of service members who are still racists and bigoted and you will never be able to get rid of all of them,” Lt. Gen. Bostick said. “But these people opposing this new policy will need to get with the program, and if they can’t, they need to get out. No matter how much training and education of those in opposition, you’re always going to have those that oppose this on moral and religious grounds just like you still have racists today.”
Witness to Bostick Comments 09/23/10 This is the military that the Obama regime wants. Look how bold this general is to speak out. He has no fear whatsoever of any repercussions for what he says! The military is now riddled with people like this.
“After awhile, the sanctimonious and pompous answers given by him and his panel were easy to overlook. However, the simultaneous gasp of a few hundred people came when Gen. Bostick responded to the morality and religious aspects of homosexuality. It is absolutely true that Gen. Bostick in part thinks that Christians were bigots and racists and those who felt homosexuality was immoral should start looking for a new line of work. He even went on to say that there will be zero tolerance for chaplains to preach against homosexuality and those that did would most likely be dealt with under the Uniform Code of Military Justice.”

EDITORIAL: Outing the new gay Army 09/23/10 “I think there’s a right thing to do and a wrong thing to do in the military,” Senator Inhofe told The Washington Times. “And this all comes from the administration. It’s put a lot of senior military people in a very awkward position of being forced into something they know is wrong.” This is the perfect way to drive the senior military people out and replace them with the Hard Left Fascists that are now pouring into leadership. It is a purge and coup all rolled into one!

Admiral Mike Mullen, chairman of the Joint Chiefs of Staff, was very clear and did not mince words that whoever did not go along with the homosexual agenda would have to look for a new job.
&nbsp
;       Adm. Michael Mullen 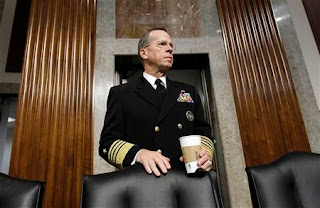 Mullen: Troops Who Balk at Change in Gay Service Policy Can Find Other Work 12/02/10

The purge could not be made any clearer “Military members who have a problem with a change in policy to allow gays to serve openly may find themselves looking for a new job, Adm. Mike Mullen, chairman of the Joint Chiefs of Staff, warned Thursday. Mullen told a Senate Armed Services Committee hearing that the military is based on meritocracy, “what you do, not who you are.” He said if Congress changes the don’t ask, don’t tell policy then the U.S. military will comply.  And if some people have a problem with that, they may not want to join the service.”
The Hard Left wants a soulless, godless military so it can be used without a conscience to turn on the American people. They need the God-fearing out because they will not go along. You are now looking directly at a purge. Obama and the Hard Left are tyrants. They will subtlety, over about a year, purge out everyone who stands against their agenda. They then will be able to use the military against the “hate” people in America. Anyone who is against their agenda will be defined as a “hate” group. This is exactly what the Communists and Nazis did: they defined anyone against them as an enemy of the state or people. It is no different with the Left in America. On the top of the “hate” list will be real Christians.
***Hate intrudes on Thanksgiving*** 11/24/10 “The Southern Poverty Law Center has placed a virtual who’s who of pro-family and Christian organizations, including the Family Research Council, the American Family Association and the Traditional Values Coalition, on a list of 13 “hate groups” for opposing the homosexual political agenda.” “Lumping Christian groups in with violent, racist gangs is a form of ‘bracketing,’ a political tactic described in the gay strategy manual ‘After the Ball.’ It’s guilt by association and it’s meant to intimidate,”
The reason this article is so significant is that the Southern Poverty Law Center is like the spokesman for the Hard Left on terror organizations. They have advised about hate groups to the Justice Department, FBI and leftist newspapers like the New York Times, which  are always quoting this organization. They are identifying the “enemies” of the state! This signals a major thrust by the Hard Left to try and marginalize the Tea Party and Christian groups. Notice the core issue is the homosexual agenda! This is the key issue with the military.
The people in the Obama administration, along with Admiral Mullen and General Bostick, fit right in with this organization. This article ties together the Left military thinking with how dangerous the “Right” is in America with the Hard Left outside of the military. The military is now loaded with leadership that thinks just like the Southern Poverty Law Center.
This is why what is happening with the military is so dangerous to Americans. They view huge sections of Americans as dangerous and enemies to the Left’s agenda. Under the right circumstances, a godless, soulless army could be used to deal with these people.
Risk of gap between US military and society: Gates 09/29/10 “Defense Secretary Robert Gates warned on Wednesday that the all-volunteer US military could become alienated from the rest of society, with recruits and bases concentrated in more rural, conservative areas. There is a risk over time of developing a cadre of military leaders that politically, culturally, and geographically have less and less in common with the people they have sworn to defend,” he said.”
What an eye opener this article is and follows on the heels of the articles about General Bostick wanting to get Christians out of the army. Defense Secretary Gates is whining that there are too many conservatives in the military from rural America! He wants a more balanced military to reflect America! What utter nonsense as the Hard Left people despise America and the military.
This is all part of driving out of the military Christians and replacing them with those that will go along with the homosexual agenda. They are so clear about purging the military of Christians.

I am warning Americans, that if the military is sodomized, horrific evil forces are going to be loosed on America. The Hard Left Fascists will either enjoy the use of the military against the people, or they will justify it as the “hateful” people are getting what they deserve.

Please, do not for one second think this could never happen in America. Who would have ever thought, even five years ago, that the American military was going to be sodomized! The Jews in Germany did not believe it could happen to them. They were loyal Germans. America has radically changed, and to the Hard Left reprobates which are in charge of huge sections of American government, the Christians are evil! To them, evil is good and good is evil.
Pastor Franklin Graham’s Warning
Franklin Graham was barred from the military for the Day of Prayer. He warned that Christians in America are now in great danger as the military has turned against the gospel of Jesus Christ and barred him from speaking and praying in the Pentagon. Pentagon Widens Christian Ban; Graham Says It’s Anti-Religion 04/26/10 “The entire National Day of Prayer task force, including the Rev. Franklin Graham, has been “disinvited” to the National Day of Prayer observance to be held at the Pentagon, … And evangelist Franklin Graham believes the military’s effort to ban him and other Christian leaders is nothing short of an effort to stamp out Christianity from the military.”
Franklin Graham: Obama ‘Giving Islam a Pass,’ Warns of Persecution 05/03/10 “Evangelical leader Rev. Franklin Graham issued his toughest remarks yet Monday on the administration’s role in revoking his invitation to speak at the Pentagon’s National Day of Prayer event, charging that President Obama is “giving Islam a pass” rather than speaking openly about the “horrific” treatment women and minorities receive in many Muslim countries … He also warned Christian of “coming” persecution for believing in Jesus Christ.”

The Hard Left is shouting out from the roof tops that they are going to drive the Christians out of the military. If they do this, THEY WILL USE THE ARMY AGAINST THE PEOPLE. If they drive the Christians out of the army, the next move will be out of society. If we do not fit in the military, then we do not fit in America. We will become the enemy of all that is “good” in their eyes.

Sodomy means more to them than almost anything else because it is something that is so clearly against God. They are in total rebellion against God. In fact, in a real sense they are at war with the Holy God of Israel. It is of the utmost foolishness to be at war with the LORD. In the short run, evil can appear to succeed, but in the long run the God of Israel’s word always wins out.
Proverbs 14:34 Righteousness exalteth a nation: but sin is a reproach to any people.
Share