Soros Group ‘Trained’ Socialists To Combat Will Of The People

I hope that you appreciate what the Lord is doing. He is unraveling the evil behind both the United States and Western governments. It is so wonderful to see the lies etc. brought to the light! God has exposed the full corruption and evil of George Soros and what he is doing behind the scenes. I consider him one of the most corrupt and evil people on earth. His evil is now exposed for all to see. I am very grateful to the Lord for doing this!

The eyes of the American people are now open to how corrupt Washington is. This is God’s judgment on evil, giving us one last chance before he moves to destroy the nation. With Hillary Clinton as president, she will finish off America, and the nation will fall of its own corruption and chaos. 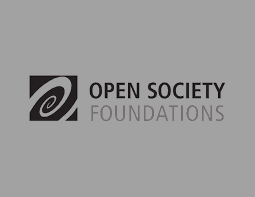 Soros Group ‘Trained’ Socialists To Combat Will Of The People 08/16/16  If you thought that I was exaggerating about Soros being one of the most evil men in the world, after reading this article I think that you will agree with me. There is no doubt in my mind that Obama, Clinton and all the reprobates are in lockstep with him. This is the New World Order getting ready for the antichrist.

We now can see the importance of the First Amendment to expose tyrants like this and stand against them. There is NO doubt that what these criminals are doing in Europe they are trying to do in America.

It is so obvious they are using the Muslims to destroy the European culture and nations with the idea that they will step in and make a Europe according to their image. In their image means no Christians because they hate us. This is all clear for everyone see. The Europeans will become their slaves! This is not a conspiracy theory but a fact advanced in their own writings.

God is so good to expose all of this so we can see it coming and take action. The includes prayer and direct action!

“Leaked documents from the Open Society Foundations show the group to have actively trained socialist MEPs to combat populist parties and shut down free speech.
A series of documents leaked from George Soros’ Open Society Foundations have revealed a number of startling revelations about the work of the NGO when it comes to combating what they refer to as “xenophobic parties” in countries around Europe.
According to at least one document the foundations has been calling for the censorship of language in the European parliament they term as hateful and have been actively working with various socialist members of the European parliament to train them on how to combat “xenophobic populism.” 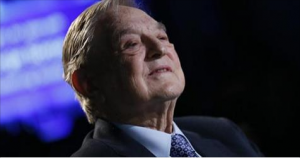 Memo: Soros Group Funded ‘Opposition Research’ On Critics Of Radical Islam 08/15/16  As I said before, Soros is evil to the core, and he wants to protect Muslims at all costs. He wants to silence everyone who has a platform to expose what Islam really is!

“A non-profit group controlled by billionaire financier George Soros set out to conduct opposition research on a handful of critics of radical Islam, a newly released internal memo shows.
The 2011 document, entitled “Extreme Polarization and Breakdown in Civil Discourse,” is one of more than 2,500 files stolen from Soros’ Open Society Foundations and published online on Saturday.
It names prominent critics of radical Islam, such as Pamela Geller, Frank Gaffney, and Robert Spencer as targets for opposition researchers working on a project operated by the Center for American Progress (CAP), a liberal think tank that has received millions of dollars in grants from Soros’ groups.
In the memo, Open Society Foundations (OSF) executives lamented that progressive groups and members of the Arab, Middle Eastern, Muslim, and South Asian-American (AMEMSA) community lacked “high quality opposition research” to combat “anti-Muslim xenophobia and to promote tolerance.” 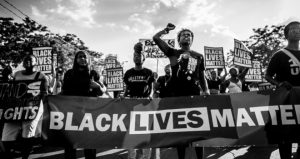 Hacked Soros Memo: $650,000 to Black Lives Matter 08/16/16  I think that Soros is actually ground zero for evil. Whatever he touches is consumed by it. There is no end to the evil that he supports.

I am so delighted that God is pulling back the curtain, so we can see the source of wickedness in this world. He is so good to us because it now has no cloak, whether it is Islam or the Hard Left reprobates in the West. Everyone now can see clearly through all the lies.

“George Soros’s Open Society Institute viewed the 2015 Baltimore unrest following the death of Freddie Gray as opening a “unique opportunity” to create “accountability” for the Baltimore police while aiding activists in reforming the city, according to hacked documents reviewed by Breitbart Jerusalem.
The documents further confirm that the Open Society last year approved $650,000 to “invest in technical assistance and support for the groups at the core of the burgeoning ‪#‎BlackLivesMatter‬ movement.”
The information was contained in a detailed 69-page Open Society report on the agenda of an Open Society U.S. Programs board meeting held in New York October 1 to October 2, 2015.” 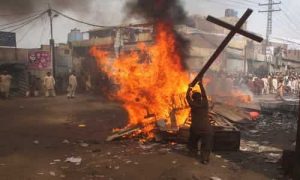 Media Silent As Persecution Of Christians Escalates 08/16/16  The same will happen in America. If the Hard Left obtains the power to kill us, the mainstream media will go along with it. We have no protection from them. Whatever is against the Lord, the Hard Left media promotes and protects.

“Reports from mission organizations around the world tell us that millions of Christians are being persecuted for their faith, with more than 7,000 having been murdered just within the last year. However, few in the West are hearing about it as the media ignores the growing threat that Christians face.
A recent survey mapped out the most dangerous places in the world to be a Christian. This year’s list, recorded using a points system, reveals persecution of Christians is actually on the rise.
Highlights were as follows:
– North Korea has been named the most dangerous place in the world to be a Christian for the 14th year running.
– Iraq has replaced Somalia as the second most dangerous place to be a Christian.
– Eritrea, now nicknamed the ‘North Korea of Africa’ due to high levels of dictatorial paranoia, follows at number three.
– Afghanistan, Syria and Pakistan, in that order, comprise the next three most difficult places for Christians.
– Somalia, Sudan, Iran, and Libya make up the final four of the top ten countries in that order.”

Buildings burn, residents flee as out-of-control brush fire burns 9,000 acres in Cajon Pass 08/16/16  The floods in Louisiana forced 40,000 to flee and now 80,000 have done the same in California. There is little letup with these disasters. The diseases are here now that could ignite into epidemics! Where is the Church on its knees before the Lord?

Leviticus 18:24-25  Defile not ye yourselves in any of these things: for in all these the nations are defiled which I cast out before you: And the land is defiled: therefore I do visit the iniquity thereof upon it, and the land itself vomiteth out her inhabitants.

“A brush fire exploded out of control Tuesday in the Cajon Pass, scorching at least 9,000 acres as walls of flame forced more than 80,000 people to evacuate and destroyed an unknown number of structures in several rural San Bernardino County communities.
Fed by strong winds, bone-dry brush and 100 degree temperatures, the Blue Cut fire marched across hills, canyons and flat lands into the night and firefighters struggled to get a handle on on a blaze they fear will get worse.
Residents in several community — including the entire ski resort town of Wrightwood — were forced to flee as the fire spread in several different directions. It closed Interstate 15 and Highway 138 — the two key routes in the area — clogging traffic and making it more difficult for residents to evacuate.
The blaze is the latest in a series of destructive wildfires to hit California as the state endures its fifth year of drought. The fires so far this year have claimed hundreds of homes and killed eight people, but officials warn the worst might be still to come because Southern California’s traditional fire season doesn’t begin until the fall when the hot Santa Ana winds typically arrive.” 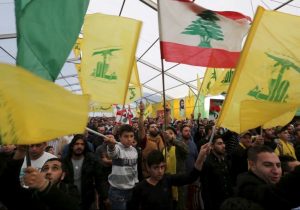 Analysis: The truth about Hezbollah 08/15/16  This is yet another great article giving you the big picture of what is happening with Hezbollah in Lebanon. With information like this, you know exactly what is happening and the Middle East picture does not look as confusing.

“Hezbollah is a much weaker organization while Israel is much stronger. This is also due to the bloody civil war in Syria in which at least 1,600 Hezbollah fighters were killed and another 6,000 wounded. Not a small matter for an army – conscripts and reservists combined – of 45,000.
On top of all this, Hezbollah has financial problems to the point that it delays payments to its members and the bereaved families and certainly to its suppliers. No wonder that Hezbollah is deterred and all its representatives, Nasrallah included, say that they don’t wish to be dragged into a new round of war with Israel.” 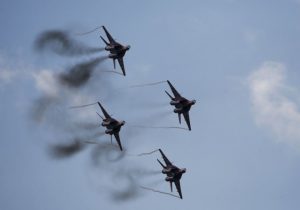 MiG-29 jet fighters of the Russian aerobatic team Strizhi (The Swifts) perform during the MAKS International Aviation and Space Salon in Zhukovsky outside Moscow, Russia, August 30, 2015

Russia deploys bombers to Iranian air base 08/16/15  Look at how Iran and Russia are teamed up. This eventually will lead to the war of Ezekiel 38-39. I see this as Russia sharpening its skills for WW3 in Europe.

“Russia’s state-backed Rossiya 24 channel earlier on Tuesday broadcast uncaptioned images of at least three bombers and a Russian military transport plane apparently inside Iran, but said it was unclear how many Russian bombers had arrived there.
It said the deployment would allow the Russian air force to cut flight times by 60 percent and increase bombing payloads.
Russian media said the Tupolev-22M3 bombers, which had already conducted many strikes on militants in Syria from their home bases in southern Russia, were too large to be accommodated at Russia’s air base inside Syria.
The Iranian air base near Hamadan, sometimes also called Hamedan, is located in north-west Iran and the Russian bombers would have to over fly Iraq to strike Syria.” 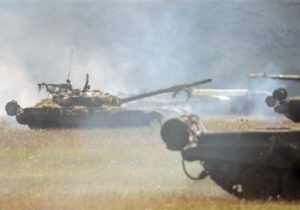 The Russians have no intention of backing down, especially with Obama as president. So we just watch and wait.

“The Pentagon has identified eight staging areas in Russia where large numbers of military forces appear to be preparing for incursions into Ukraine, according to U.S. defense officials.
As many as 40,000 Russian troops, including tanks, armored vehicles, and air force units, are now arrayed along Ukraine’s eastern border with Russia.” 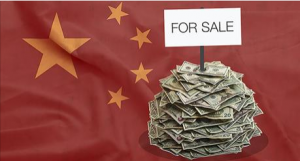 “In the first six months of this year, foreign central banks sold a net $192 billion of U.S. Treasury bonds, more than double the pace in the same period last year, when they sold $83 billion.
China, Japan, France, Brazil and Colombia led the pack of countries dumping U.S. debt.
It’s the largest selloff of U.S. debt since at least 1978, according to Treasury Department data.
“Net selling of U.S. notes and bonds year to date thru June is historic,” says Peter Boockvar, chief market analyst at the Lindsey Group, an investing firm in Virginia.
Related: U.S. bond yield hits record low
U.S. Treasurys are considered one of the safest assets in the world. A lot of countries keep their cash holdings in U.S. government bonds.”