This Map is Just For This Year!
I have been posting a number of articles showing how the record disasters of droughts, floods, hale, and tornado storms are wrecking havoc with the crops. A great study was just done on this, which shows the clear picture of how God is using these storms to touch the food production of the United States. It is the first article listed below.
This is not limited to America, as nation after nation throughout the world are suffering damage to their crops. This includes Europe and China which are going to put enormous pressure on the world food supply as their crops fail. This all ties into the world coming against Israel and a curse from the Holy God of Israel is spreading across the nations. When God sends the final judgment on a nation, He touches the food and water which is exactly what is now happening on a global scale.
Below, I posted just a few of the recent articles to show how serious this is. The main media is not reporting this, but I am showing you exactly what is happening. The media will not touch it until it starts to reach the critical level.
In the past, I have recommended that everyone store food and supplies as the Lord leads. I asked everyone to store more than they need, so they can be a blessing on others. I have not mentioned this for a long time until just the other day. I do sense that the window is closing very fast and now is the time to store. There are many new followers of the blog, so I am encouraging you to pray and store as the Lord leads you.
God warned Joseph of the famine, and he saved a nation and his family. God will warn His church of the coming disaster. It is up to us to act. I personally do not want to be subjected to the state or federal government for food. It is time for churches to pool their resources, so the poor and helpless can be cared for through what is coming.
The nation has been hit with record flooding, droughts, hail and tornado storms all at the same time! It is very possible that this Fall will see record crop failure as God removes His blessings from America. I believe that Obama is going to pressure Israel to divide the land and Jerusalem. If he does, then the destructive curse will surely settle over the entire nation. God has been warning that it is coming for decades as all these massive disasters are coinciding to what the American government is doing to pressure Israel to divide Jerusalem and create a Palestinian state.
May the Holy God of Israel bless and protect you.
***Alarming Number of Disasters Striking World “Food Baskets”*** 05/16/11 “For the last 5 years, we have posted countless articles covering both natural disasters and their impact on our food supplies as well as on many other timely topics. After several decades of monitoring these events, it’s hard to convey how shocked we are by the sheer number of disasters that have occurred just in the first 4 months of 2011. Yesterday, all day, I spent analyzing natural disasters and plotted them against our food belts. Never, ever, have I seen so many federally declared disasters this early in the year.”
21 Kansas counties that have been declared natural disaster areas by the U.S. Department of Agriculture 05/11/11
Drought taking toll on Kansas wheat, hay crops 05/15/11
Floods to delay start of U.S. grain export season 05/12/11
A Midwestern study of the foods, and foodways, of the Great Depression 05/10/11
‘Dustbowl Britain’ faces repeat of 1976 drought as dry spell drags on and crop failures lead to higher food prices 05/17/11
Worst Drought in 50 Years Threatens Cuba’s Already Meager Food Production 05/15/11
< a href="http://www.click2houston.com/news/27922921/detail.html">Drought Affects Cattle, Crop Sales 05/17/11
Spring rain causing problems for Ohio farmers 05/16/11
Soggy Michigan spring puts clamps on crops 05/16/11
Soaked Fields Threaten Ind. Corn Crop 05/16/11 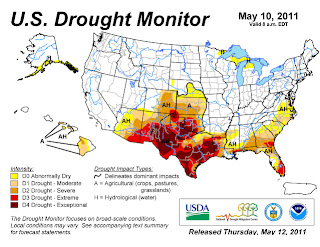 Proverbs 6:6-8 Go to the ant, thou sluggard; consider her ways, and be wise: Which having no guide, overseer, or ruler, Provideth her meat in the summer, and gathereth her food in the harvest.
Share