A prudent man foreseeth the evil, and hideth himself: but the simple pass on, and are punished.

The time has arrived for economic judgment. It has been building since the Fall of 2008 when the stock market crashed. Europe is on the brink of total collapse. All the warning signs are now flashing with sirens sounding. This is not going to be a recession, but it is going to be a meltdown. This cannot be stopped. The debt is so massive that it has a life of its own. All the world’s economies are now tied together, so when Europe goes under it is going to pull down America and the rest of the world. Once the nations go bankrupt it will spread very fast.

The meltdown in Europe is tied to bullying Israel which I have posted on my blog. The meltdown in America is tied to Israel and the promotion of sodomy. I have linked many articles to the promotion of the homosexual agenda and the collapse of the economy. One such posting was this week. God will not allow sodomites to “marry” and mock His institution of marriage. America is fully engaged in promoting this and God is timing the collapse of economy with the sin of homosexuality. In the start of the collapse, it was tied to dividing Israel but now sodomy has replaced dividing Jerusalem. Notice how this week so much of the headline was about homosexuality and especially about “gay marriage”. This is the same week the US economy took a huge turn for the worse. This may mark the week when the US economy took the final turn to melting down. If it is, then it is directly linked to promoting “sodomite marriage”. 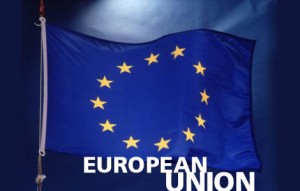 European Union Flag that is about to change

‘Beware a rerun of the Great Panic of 2008’: Head of World Bank warns Europe is heading for ‘danger zone’ as world markets suffer bleakest day of the year so far 06/01/12

“Mr Zoellick, who stands down at the end of the month after five years in charge of the watchdog, said it was ‘far from clear that eurozone leaders have steeled themselves’ for the looming  catastrophe amid fears of a Greek exit from the single currency and meltdown in Spain. The flow of money into so-called ‘safe havens’ such as UK, German and US government debt turned into a stampede yesterday.”

This Summer an ‘Eerie Echo’ of Pre-Lehman 05/31/12 This is a reference to the condition prior to the collapse of Lehman Bros and the stock market crash of 2008.