What Triggers God's Judgment on a Nation?

The Ordinances of the Amorites

Genesis 15:16 But in the fourth generation they shall come hither again:

for the iniquity of the Amorites is not yet full.

God told Abraham that his descendants were going to leave the land of Canaan for 400 years because the iniquity of the people living in the land was not complete. There is a process for a society to be taken over by iniquity. In the case of the Canaanites, God gave these people 400 years to stop iniquity. God knew that after 400 years the iniquity of the people would reach its peak. The people would not turn from sin, but they would completely embrace it.

When studying Genesis 15:16 there is a key word in this verse. It is the Hebrew word translated full. This word is directly connected with the idea of friendly or friendship. The concept of this word is that when a society is friendly with iniquity at that point it is subject to judgment from God. Iniquity is no longer shameful or a disgraceful. It is not hidden or done in the dark. The people are friendly with it. They are accustomed to it. In Genesis 15:16, the Bible does not define iniquity: it simply states that there is a time for it to mature in a society and become full.

After the 400 years, the Jews left Egypt and came back to the land of Canaan . Today it is called the land of Israel . At this time, the Bible identifies what is iniquity. In Leviticus 18, God warned the Jews not to follow the ordinances of the Canaanites who lived in the land. The Canaanites and Amorites blended into one people; therefore it is also the ordinances of the Amorites that are mentioned in Genesis 15:16.

In the above verse, the key word is ordinances. The Hebrew word means an enactment and is also translated custom, manner, and statute. By using the word ordinance the Bible is describing a society that is “friendly” with iniquity. Iniquity has become ingrained in the Canaanites by both customs and laws which makes it a way of life. For this reason, God is about to judge the Canaanites and drive them off the land. The judgment comes because iniquity is an ordinance of the society and not because individuals are committing iniquity. When a society makes iniquity an ordinance, this is extremely serious with God.

Later in chapter 18, the Bible defines iniquity. It includes such acts as: adultery, child sacrifice, homosexuality and bestiality. Homosexuality is singled out from this group and described as an abomination. Without any doubt, God strongly condemns the homosexual act as iniquity. There is no section in the Old Testament where God approves or condones homosexuality. The homosexual act is a very serious offense to God. It is linked with child sacrifice and bestiality. The Scriptures to show this follow:

Leviticus 18:20 Moreover thou shalt not lie carnally with thy neighbour’s wife, to defile thyself with her. (Adultery)

(21) And thou shalt not let any of thy seed pass through the fire to Molech, neither shalt thou profane the name of thy God: I am the LORD. (Child sacrifice)

(22) Thou shalt not lie with mankind, as with womankind: it is abomination. (Homosexuality)

(23) Neither shalt thou lie with any beast to defile thyself therewith: neither shall any woman stand before a beast to lie down thereto: it is confusion. (Bestiality)

The Bible warns that when homosexuality becomes an ordinance, social custom or norm, it will bring God’s judgment on that nation. When the Bible defines iniquity, the homosexual act would automatically fall under the description of this word. In the strongest language possible, the Bible says because of iniquity the land will vomit out its inhabitants. The Scriptures to show this follows:

Leviticus 18:24 Defile not ye yourselves in any of these things: for in all these the nations are defiled which I cast out before you:

(25) And the land is defiled: therefore I do visit the iniquity thereof upon it, and the land itself vomiteth out her inhabitants.

(26) Ye shall therefore keep my statutes and my judgments, and shall not commit any of these abominations; neither any of your own nation, nor any stranger that sojourneth among you:

(27) (For all these abominations have the men of the land done, which were before you, and the land is defiled;)

The United States now is enacting, by both custom and law, the Ordinances of the Amorites; therefore the nation is defiled before the holy God of Israel and faces His judgment. By promoting homosexuality, America has become like the ancient pagan Amorites and has now come under the judgment of God.

America promotes homosexuality by custom with events such as Gay Pride Day, Gay Awareness Month (June), Gay day at Disney land, Gay Day at sporting events and events like Southern Decadence in New Orleans . There are gay clubs in high school and colleges. The political parties are pandering to the homosexuals for their votes. By custom, homosexuality has woven into the fabric of America .

America is continually making ordinances to advance the homosexual agenda. Sodomites can legally marry in California and Massachusetts while many states recognize civil unions. Homosexuals are now able to adopt children and gain custody of children during a divorce. There are now numerous hate speech laws which are being used to silence opposition to the homosexual agenda. America is a long way down the road to enacting all the Ordinances of the Amorites.

The Bible warns of God judging a nation that walks in these ordinances. When the corporate attitude of a nation is friendly toward homosexuality then at this point the iniquity is full. It is apparent that “the cup” of America ’s sin is rapidly filling up. Americans hardly blush anymore at fornication and adultery. The nation kills over one million babies a year with up to 50 million killed since 1973. The legalizing of abortion was an additional Ordinance of the Amorites. Homosexuality is fast becoming a constitutional right. The only ordinance left to fulfill Leviticus 18 is bestiality. This is probably next on line to become an ordinance!

The following is a quote from a proclamation that President Obama made on June 1, 2012, outlining all the Ordinances of the Amorites he created.  He is proud of this! and right in God’s face with this. No nation can go this far down this road and not expect judgment. It has to come because God is holy. and in the Bible the judgments are decreed on a people who do this.

“Since I took office, my Administration has worked to broaden opportunity, advance equality, and level the playing field for LGBT people and communities. We have fought to secure justice for all under the Matthew Shepard and James Byrd, Jr., Hate Crimes Prevention Act, and we have taken action to end housing discrimination based on sexual orientation and gender identity. We expanded hospital visitation rights for LGBT patients and their loved ones, and under the Affordable Care Act, we ensured that insurance companies will no longer be able to deny coverage to someone just because they are lesbian, gay, bisexual, or transgender. Because we understand that LGBT rights are human rights, we continue to engage with the international community in promoting and protecting the rights of LGBT persons around the world.

Because we repealed “Don’t Ask, Don’t Tell,” gay, lesbian, and bisexual Americans can serve their country openly, honestly, and without fear of losing their jobs because of whom they love. And because we must treat others the way we want to be treated, I personally believe in marriage equality for same-sex couples.” 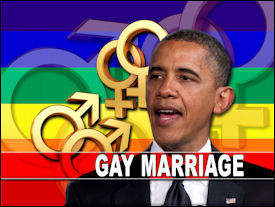 Notice in the next quote from Obama’s proclamation as he is promoting homosexuality, it ends with “in the year of our Lord”.

By using the term “our Lord” he connects the Holy God of Israel with sodomy, and the LORD will have none of it. He will not allow His holy name to be associated with the Ordinances of the Amorites! This action by America demands judgment.

“NOW, THEREFORE, I, BARACK OBAMA, President of the United States of America, by virtue of the authority vested in me by the Constitution and the laws of the United States, do hereby proclaim June 2012 as Lesbian, Gay, Bisexual, and Transgender Pride Month. I call upon the people of the United States to eliminate prejudice everywhere it exists, and to celebrate the great diversity of the American people.

IN WITNESS WHEREOF, I have hereunto set my hand this first day of June, in the year of our Lord two thousand twelve, and of the Independence of the United States of America the two hundred and thirty-sixth”

America is continually making ordinances to advance the homosexual agenda. Homosexuals can legally marry in California, Massachusetts and New York, while many states recognize civil unions. Homosexuals are now able to adopt children and gain custody of children during a divorce. There are now numerous hate speech laws which are being used to silence opposition to the homosexual agenda. America is a long way down the road to enacting all the Ordinances of the Amorites.

The Bible warns of the Holy God of Israel judging a nation that walks in these ordinances. When the corporate attitude of a nation embraces homosexuality then, at this point, the iniquity is full. It is apparent that “the cup” of America’s sin is rapidly filling up and overflowing. Americans hardly blush anymore at fornication and adultery.

The nation kills over one million babies a year with up to 55 million killed since 1973. The legalizing of abortion was an additional Ordinance of the Amorites.

Homosexuality is fast becoming a constitutional right. The only ordinance left to fulfill Leviticus 18 is bestiality. This is probably next on line to become an ordinance!

Jude 1:7 Even as Sodom and Gomorrha, and the cities about them in like manner, giving themselves over to fornication, and going after strange flesh,

are set forth for an example, suffering the vengeance of eternal fire.