This happened in Great Britain, but it is very important to America because the reprobate mind is the same no matter what the nation is. GB is slightly ahead of America in cultural collapse into sin. What happens in GB in just a few years will hit America unless there is is a revival and outpouring of the Holy Spirit. 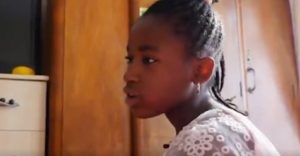 “The thought police are on the prowl once more, reducing independent thinkers and religious individuals to a pile of embarrassment and shame — even if their targets are only children.

In South London, two 10-year-old Christian students say they were suspended after they asked their Heavers Farm Primary School headteacher if they could forgo participation in a lesson about LGBT topics during “Pride Month.”

Headteacher Susan Papas allegedly told both kids, who are of African heritage, that their opposition to the LGBT activity made them “a disappointment to the school,” Christian Concern reported. The students, Farrell Spence and Kaysey Francis, were given five hours of detention and were suspended for a week. Watch Kaysey defend her beliefs in the video below.”

“Christian University Kneels at the Rainbow Flag” This is yet another sign the bottom has fallen out of what really is a “Christian” institution. The college should either close it doors, or change its name and become secular. What a disgrace to the name of the Lord Jesus.

But conversion therapy is already illegal for secular institutions in the state of California and has been since 2012. This resolution paves the way for penalizing religious organizations in California. It is a direct violation of First Amendment rights.” 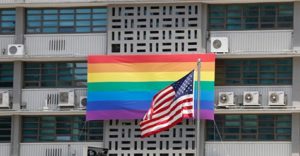 “A Battle for the Soul of the Nation”

This is an excellent article by Franklin Graham. The Hard Left literally hate and loath the founding of America. They want to destroy the foundation and go after those that hold to this Christian foundation. They want to go after us as the Nazis went after the Jews.
We need a revival for survival: NOW!!!

“They built this nation upon a strong foundation rooted in God’s laws. Sadly, that same moral and spiritual framework, which has held our nation together for 243 years, is now unraveling so quickly that I fear for the future of our children and grandchildren. The America that I knew as a young boy growing up in the mountains of North Carolina has changed so radically.

Zealots for “separation of church and state” have led legislatures and the judiciary to suppress and deny the essential role of religion in our schools and public life. The sexual revolution of the 1960s has now morphed into an open advocacy for gay, lesbian and transgender rights. Homosexual marriage was given full federal sanction by the U.S. Supreme Court in 2015.

The progressive left has ascended into a national political power that presents a clear and present danger to our basic religious liberties and freedoms. They despise anyone who is pro-life and mock all who hold to a Biblical worldview.” “Jeffrey Epstein’s Sick Story Played Out for Years in Plain Sight” This is a very interesting article because the prosecuting attorney Acosta was told to back off Epstein because he was working with Intelligence! I totally believe this. There is no doubt the Intelligence agencies are loaded with pedophiles, and Epstein was servicing them with the young girls: therefore, they protected him!.
This is exactly how the deep state operates, and this is why the child sex rings in DC are never broken because they are protected!
I hope with President Trump and AG Barr in power that things are going to change. I think Epstein could really clean out the deep state if he tells all!

““Is the Epstein case going to cause a problem [for confirmation hearings]?” Acosta had been asked. Acosta had explained, breezily, apparently, that back in the day he’d had just one meeting on the Epstein case. He’d cut the non-prosecution deal with one of Epstein’s attorneys because he had “been told” to back off, that Epstein was above his pay grade. “I was told Epstein ‘belonged to intelligence’ and to leave it alone,” he told his interviewers in the Trump transition, who evidently thought that was a sufficient answer and went ahead and hired Acosta. (The Labor Department had no comment when asked about this.)” 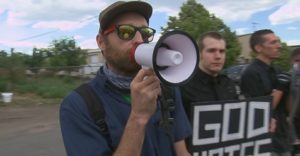 “All-Ages Drag Show Draws Controversy, Protests” I see this as part of the process for the acceptance of pedophilia. There is something very evil about this.

“Protesters were kept behind a fence with a strong police presence outside an all ages drag show in Denver on Sunday. About a dozen young people participated in the show which caused some controversy.

The show on Sunday was organized by Mile High Comics and the spotlight quickly turned away from the stage and focused on the controversy. Children making their way into the venue were escorted by adults, many of them wearing earphones to drown out the protests.”

“Here Are The Details On California’s Sex Education” After reading this article, if you have children in California’s public schools you MUST get them out of the system. The system will turn children, right before your eyes, into a reprobate.
When young children’s minds are exposed to what the reprobates are showing them, they are damaged. The children being corrupted like this are a sure sign the Lord’s destructive judgments are on the way to destroy this state. The destruction of America is accelerating to blinding speed. God has turned over vast areas of America to the reprobates for destruction.
The reprobates ruling are judgment on America. They ARE judgment leading to the final judgment.

Romans 1:24,25 Wherefore God also gave them up to uncleanness through the lusts of their own hearts, to dishonour their own bodies between themselves: Who changed the truth of God into a lie, and worshipped and served the creature more than the Creator, who is blessed for ever. Amen.
Rom 1:26,27 For this cause God gave them up unto vile affections: for even their women did change the natural use into that which is against nature: And likewise also the men, leaving the natural use of the woman, burned in their lust one toward another; men with men working that which is unseemly, and receiving in themselves that recompence of their error which was meet.
Rom 1:28 And even as they did not like to retain God in their knowledge, God gave them over to a reprobate mind, to do those things which are not convenient;

The California Board of Education implemented progressive sex and gender education curriculum in public schools across the state, regardless, in some cases, of parental knowledge or consent.” 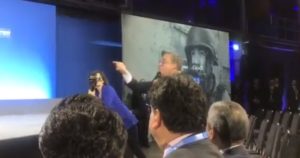 “You Censorious Thug!”: Pakistani Foreign Minister Confronted Over Twitter Censorship” This shows how the Hard Left and Islam are working on an international scale against freedom and to suppress any exposing of the horrors of Islam!

“Pakistani Foreign Minister Shah Mehmood Qureshi was confronted by Ezra Levant over his government’s astonishing ability to censor the tweets of Twitter users who are based in America and Canada.

The exchange took place at a “Defend Media Freedom” conference in London (which some news outlets like RT and Sputnik were barred from attending).

Tweets are routinely deleted by the Silicon Valley giant on the orders of the Pakistani government, particularly in the context of criticism of Islam. This is what happened to Rebel Media owner Ezra Levant despite Levant being a citizen of Canada and Twitter being an American company.” 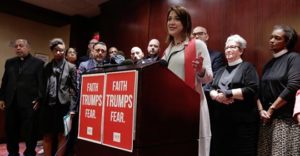 “Prominent liberal church ousts pastor after alleged sex toy shopping spree” According to their doctrine, there is no sexual “sin” what did she do wrong? This “church” is really a pagan temple. All that is missing is an idol of Moloch.

The Rev. Amy Butler, an anti-Trump rising star at Riverside Church known as “Pastor Amy,” had a formal harassment claim filed against her in May in a shocking fall from grace for a congregation known for its inter-denominational liberalism and progressive beliefs on LGBTQ, immigration, and environmental issues, according to the New York Post.

And while the charge against the high-ranking woman of the cloth alleges some raunchy, aggressive behavior, her supporters maintain she was let go because she spoke up against harassment and sexism in the church.” 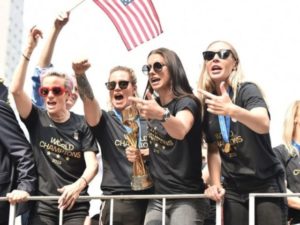 What you are witnessing is a reprobate mouth in action. The worst they act and say, the more of a hero they become. The deeper the rebellion, the more those of a reprobate mind flock to them.

Matthew 12:34 O generation of vipers, how can ye, being evil, speak good things? for out of the abundance of the heart the mouth speaketh.

“Another member of the U.S. Women’s National Team has been seen in an expletive-laden rant on video, this time it’s goalkeeper Ashlyn Harris who was on video dropping f-bombs during Wednesday’s World Cup celebration parade in New York.

Like team co-captain, Megan Rapinoe, Harris also seems to have a habit of using thoroughly foul language she proudly displays on video.

A compilation video of Harris and her teammates celebrating during the World Cup parade shows Harris constantly addressing the camera as “bitch,” and liberally using the guttural phrase “motherf***er,” SBNation reported.

In one short segment, Harris yells, “Hide your kids, hide your wife, and lock your f***in’ doors because we got the key to the motherf***in’ city, and I’m comin’ for all y’all bitches.” 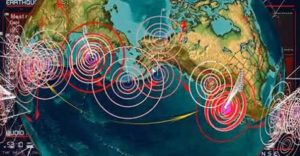 Meme: President Trump vs Dems: There is a lot of truth in this meme! 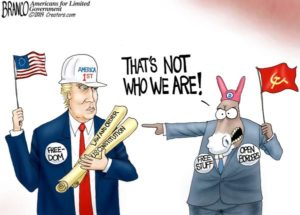 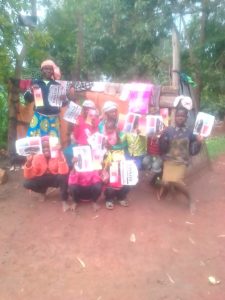 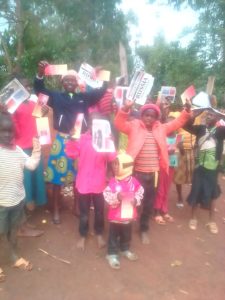 Kindly servant of God i request another newsletters .
I have attach few pictures
Yours in the Lord, JW