As France and the European Union Have Done to Israel

Obadiah 1:15  For the day of the LORD is near upon all the heathen: as thou hast done [to Israel], it shall be done unto thee: thy reward shall return upon thine own head.

Even the Israeli papers have picked up on this linking of the two cities! Worse judgments from the Lord are in store for the nations if they act on trying to divide both Jerusalem and Israel. 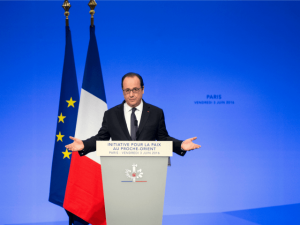 “Despite its own lingering problem of domestic Islamic extremism, France has turned its sights on attempting to solve the so-called Israeli-Palestinian conflict, holding a “peace” summit on Friday without the participation of either Israel or the Palestinian Authority. French President Francois Hollande kicked off the conference by strongly implying that the failure to create a Palestinian state is at the heart of the problem throughout the Middle East. “Violence is growing and hope is fading — that’s why we want to try and revive the peace process. We must work to realize that in the regional context and diplomatic vacuum will be filled by extremism and terror,” Hollande stated, according to Haaretz. “Considerable progress has been made, but there is still no peace,” Hollande said. “France doesn’t seek anything for itself. Its sole purpose is to foster peace.” Hollande seems to be glossing over sectarian violence in Egypt, Syria, Iraq, and beyond, conflicts that do not center around Israel or the Israeli-Palestinian issue.” 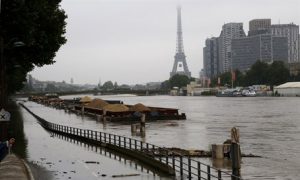 “Divine message? Natural disaster declared, Louvre artwork evacuated as River Seine hits 1982 record – same day as French initiative talks. In an ironic twist of fate, the same Friday that the international conference of the French initiative to force peace talks on Israel was launched in Paris, floodwaters in the capital city reached peak levels in what has been declared as a natural disaster. The River Seine in Paris is set to reach six meters (19 feet) above its normal levels on Friday, causing the prestigious Louvre and Orsay museums to close as staff anxiously rushes to move famous artworks out of the flood path.” 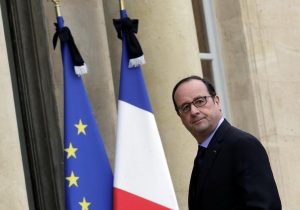 “Forget unrelenting terrorism, the Hamas-Fatah split, and the consistent Palestinian refusal to recognize Israel as the national home of the Jews. According to a French pre-summit paper published on Thursday, settlement activity is the main threat to a two-state solution. The brief document put out by the French Foreign Ministry to explain the French initiative and the one-day Mideast summit to be held in Paris on Friday said the two-state solution was under increased threat, “particularly with regard to continued settlement activities.” Foreign Ministry director-general Dore Gold said in response that what has disrupted the peace process more than any other factor since the 1993 Oslo Accords has been the “breakdown of security due to the Palestinian adoption of violence against Israel.” Citing the suicide bombings, the rockets from Gaza, and the current wave of knife attacks, Gold said that “to ignore this recent history and focus on Israeli settlements is to completely distort what is going on in the Middle East.” The document did not include a word regarding any Palestinian culpability for the current diplomatic logjam. It also seemed to seek to revitalize the notion, which lost much of its currency following the Arab Spring, that the Israeli-Palestinian conflict was at the core of instability in the Middle East.”