For the day of the LORD is near upon all the heathen: as thou hast done (to Israel),  it shall be done unto thee: thy reward shall return upon thine own head. 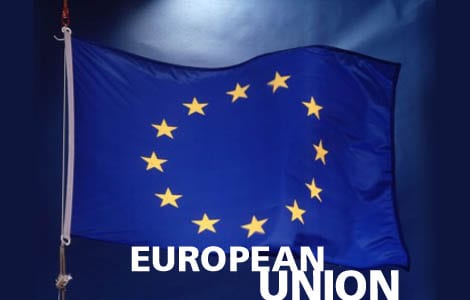 The Europeans are directly in the cross-hairs of God’s judgment. He has opened the borders and poured millions of Muslims in as judgment for trying to force the same upon Israel. Now, the very EU itself is starting to divide up, just as these nations tried to divide both Jerusalem and Israel!

It is very clear that God’s day of grace with the European nations has come to an end, because the decision for Great Britain to leave the EU shows the time for judgment has come. The Europeans pushed Israel too hard and now they are reaping the judgment.

This is just the beginning, since the Muslims are going to wreck havoc and the economy is going to meltdown. And, don’t forget that Putin’s army is sitting on the border just waiting for orders to attack. The Europeans are in deep trouble with the Lord.

Is there any of the real Church left in Europe to cry out to the Lord for help and mercy? If the Church failed to stand up to the Hard Left, how is it every going to stand up against the Muslim hordes?

Remember, America is not far behind the Europeans. What you see happening in Europe is heading America’s way, because we promote the same sins and rebellion.

Isaiah 40:15 Behold, the nations are as a drop of a bucket, and are counted as the small dust of the balance: behold, he taketh up the isles as a very little thing. 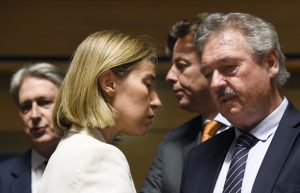 “The European Union on Monday proposed “concrete” incentives for Israelis and Palestinians to restart peace negotiations at a peace summit later this year in Paris.

During their monthly meeting in Brussels, the EU’s 28 foreign ministers tasked the European Commission and the EU’s External Action Service — its equivalent of a foreign ministry — to make a “concrete and substantial contribution” to international efforts seeking to revitalized the stalled Israeli-Palestinian peace process through a “global set of incentives” for both two parties.

“The EU is determined, alongside other international and regional partners, to bring a concrete and substantial contribution to a global set of incentives for the parties to make peace with a view to an international conference planned to be held before the end of the year,” the foreign ministers said in a statement.

Both Israelis and Palestinians “need to demonstrate, through policies and actions, a genuine commitment to a peaceful solution in order to rebuild mutual trust and create conditions for direct and meaningful negotiations aiming at ending the occupation that began in 1967, and resolving all permanent status issues,” the European foreign ministers said. The EU’s foreign ministers also unanimously endorsed the French peace initiative, which started with a conference in Paris earlier this month. Israel flatly rejected the French move, arguing that it hardens Palestinian negotiation positions and thus pushes off peace.” 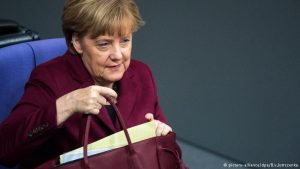 Merkel calls Brexit ‘a watershed for Europe’  06/24/16 This is the very beginning of the European Union’s breakup, with huge changes and instabilty coming to Europe.  I believe that Europe is heading into a time of civil unreast, war and confrontation with the Muslims.

“German Chancellor Angela Merkel has called the UK’s decision to leave the European Union a watershed for Europe and European unity. It’s now up to her and EU leaders to ensure other countries don’t follow suit. “There’s no way around it: Today is a watershed for Europe and the European unity process,” Merkel said before urging other EU leaders not to be hasty in their responses to Britain’s referendum vote.

As Europe’s most powerful leader and the head of Europe’s largest economy, Merkel must now lead negotiations on new terms for the UK’s relations with the EU, including the access of British companies to the biggest single market in the world.” 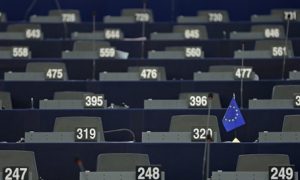 “The European Union’s Foreign Affairs Council is expected to adopt a resolution that will back the French peace initiative on Monday, Haaretz reported Saturday night. The resolution will call for an international peace conference including Israeli and Palestinian participation before the end of the year, according to the newspaper.

On June 3, France hosted a summit of foreign ministers in Paris who discussed ways in which the international community could “help advance the prospects for peace, including by providing meaningful incentives to the parties to make peace,” according to a joint statement.

Senior Foreign Ministry officials said Saturday night that Israel failed to block the move by the panel of the EU’s 28 foreign ministers, which will add significant weight to the French proposal. Israel can now only try to soften the wording of the resolution, they said, according to Haaretz. Israel has rejected the French initiative, with Foreign Ministry Director-General Dore Gold said the bid was doomed to failure, like a 1916 colonial effort to carve up the Middle East.

France has continued to advance the initiative, which has gained wider international support. This includes follow-up measures such as forming international working teams for issues including confidence-building gestures, security arrangements and economic incentives. Paris is pressing EU foreign policy chief Federica Mogherini and European foreign ministers to endorse the resolution on Monday, which would fully harness the entire EU to its plan, according to the report. A senior Foreign Ministry figure, who spoke on the condition of anonymity, said the draft resolution includes nearly all the items on France’s “wish list.” 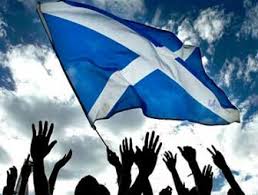 New Scotland independence referendum ‘highly likely’   06/24/16 Amazing that Scotland wants to secede from Great Britain. God is dealing with Britain exactly like it tried to deal with Israel! This is happening before our very eyes. The Lord judgments are now moving mightily on the earth. The time of judgment has arrived.

“A second Scottish independence referendum is “highly likely”, First Minister Nicola Sturgeon said on Friday, raising the prospect that the United Kingdom could tear itself apart after voting to leave the European Union.

Scotland, a nation of five million people, voted decisively to stay in the EU by 62 to 38 percent in a referendum on Thursday, putting it at odds with the United Kingdom as a whole, which voted 52-48 in favor of an exit from the EU, or Brexit. “As things stand, Scotland faces the prospect of being taken out of the EU against her will. I regard that as democratically unacceptable,” Sturgeon told a news conference in Edinburgh.

Some European politicians were quick to suggest that an independent Scotland should be welcomed into the fold.”Europe is open to new member states. That is totally clear,” said Manfred Weber, leader of the largest bloc of lawmakers in the European parliament.” 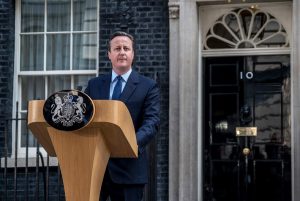 HOW BRITAIN WAS BROKEN 06/24/16 This really does look like Great Britian as we knew it is dividing up! Just as Great Britain tried to divide Israel and Jerusalem, now it is being broken up! This is the beginning of judgment on all of Europe, and especially the EU.


“In the first hours of the strange new world, Prime Minister David Cameron, a broken man, announced that he would be stepping down, implicitly acknowledging that referendum was entirely of his making, and that he was responsible for losing it. Nicola Sturgeon, the leader of the Scottish National Party, announced that the country, which had voted overwhelmingly to remain, would likely be seeking a new independence referendum in order to join the E.U. as an independent nation. In Northern Ireland, where a majority had also voted to remain, Martin McGuinness, the deputy first minister and member of nationalist Sinn Fein, called for a poll on a united Ireland. Nearly a century after the Irish Civil War, and only decades removed form incomprehensible atrocities of the Troubles, it is indeed conceivable that the border between Ulster and the Republic could be vanquished.”

Deuteronomy 32:41  If I whet my glittering sword, and mine hand take hold on judgment; I will render vengeance to mine enemies, and will reward them that hate me.