Hard Left: Destroying the US Military

When God moves to judge a nation, this happens:

Isaiah 3:12 As for my people, children are their oppressors, and women rule over them. O my people, they which lead thee cause thee to err, and destroy the way of thy paths.

Hard Left: Destroying the US Military 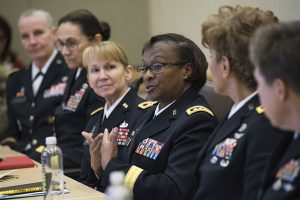 “Day of Delusion at the Pentagon: Infantry Women, National Security Equals Gender Neutrality, the Army is a Welfare Program and Pregnancies are No Hindrance to Combat Readiness” This article is so important that I posted it in full.

Remember, I often said that the Hard Left reprobate mind is the most destructive force on earth. After reading this article, I think you can see once the reprobate mind gets into power, it can only destroy. This is because this mind is energized by satan who only can destroy.

Trump and Mattis have to purge these people out to save the military. The once mighty US military is being reduced to rabble that can’t defend the nation. As an American citizen, I feel threatened by the direction of the US military because it will not be unable to fight a real war against real armies like those of Russia and China. The delusion of the Hard Left is destroying the core of the military. This is how nations collapse from within.

“As the feminist Kamikaze bears down on the U.S.S. Pentagon, spineless brass sip Mint Juleps on the bridge, adding up their pensions and hoping to abandon ship before the US military is catastrophically killed in the next war.

Which it will be, if nothing changes, mark my words.

Across the military, standards are dropping faster than a Greg Maddux sinker; as lackeys, perfumed princes, feather merchants and cultural Marxist, Obama holdouts do their best to make the US Military the Laughing Stock of the World. 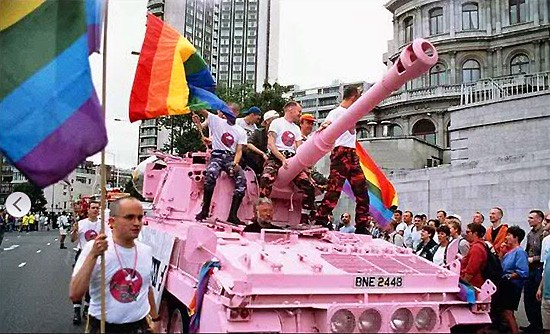 Standards are hitting new lows across the board in the military, in order to fuel feminists’ fantasies. There are currently no physical standards at the Special Forces Qualification Course. What does this mean? It means that your 90 year old grandma can become a Green Beret now. The Marines recently chucked a grueling physical endurance test they had been using at the Marine Corps’ Officer Basic Course for 50 years. There is no longer a requirement to throw a live grenade successfully at Army Basic Training. And, Fort Benning, is pumping out female Rangers faster than you can say ‘shotgun wedding.’

If women are passing Ranger School honestly, let’s see the records for all the women who graduated, starting in 2015, and including 37 year old Mommy Ranger. I love the idea of a Mommy Ranger. She can seize an airfield one day, and pick up her son at soccer practice the next. Isn’t diversity cool? Oh rejoice, equal opportunity!”

And, then there’s General Maude…! 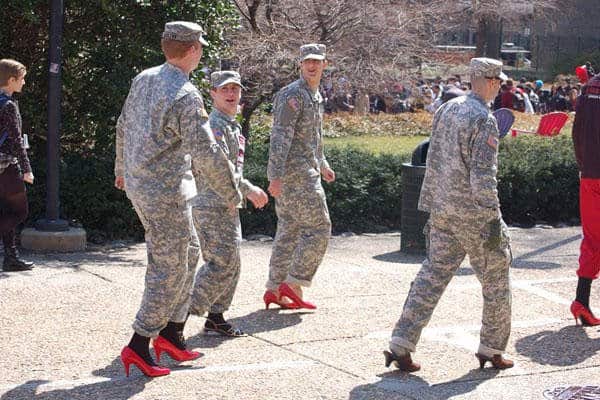 God Help us all. ‘Colonel Darby, who was a mighty brave, is rolling around in his shallow grave.’

It is all a gigantic lie, a Potemkin Village waiting to be burnt down, a US Government, machine fabricated Quonset hut of cards that will collapse the moment the first green tracer rounds go down range in anger at our vanguard of crack, female troops. It is all a mammoth Pinocchio. Feminists know it. The generals know it. The Secretary of Defense knows it. Yet, it continues to metastasize like an unstoppable cancer.

Liberals applaud all of it as some kind of 21st Century civil rights crusade tantamount to a Dr. King march. What it is really tantamount to is national suicide.

Want to know the current state of PC, liberal delusion wafting through the US military now? Just listen to the comments recently made by several female general officers during the Women Leadership Roundtable Discussion at the Pentagon on February 7, 2018, aka ‘The Day of Delusion.’

“I just know that the future leader of the Army is going to be a woman because that person is going to be infantry and come up through the ranks and do it. I know they can,” said Garcia.

Of course they can! Within a year there will be no physical standards remaining in the US Army, much less the entire military to accommodate women into the combat arms. Ten old ladies steering walkers into a Marie Callender’s is the new infantry squad of 2018.

The Day of Delusion continued with comments by Major General Tammy Smith:

“Women don’t go to Pathfinder School,’” she recalled as she conveyed the response she received when she asked to attend the course in her earlier years, even though the rules had changed, allowing her to do so. Today, that culture has changed drastically, and that situation would play out much differently, she said. There is recourse for a supervisor who prevents female Soldiers and officers to attend courses that they are eligible for, she said.

I wonder how Smith would have done on D-Day, jumping into Normandy in the middle of the night to light the drop zones for the main airborne effort? Why do I get the feeling she would have gotten pregnant to avoid being deployed to the ETO in the first place? But, back then, the military didn’t have to deal with this nonsense. In 1944, the military was focused on winning a world war, not on placating the feminist and LGBT lobby. To Smith, like most feminists, the combat arms and its schools are just useful tools for them to use on the road up the career ladder, national security be damned.

The general officers conveyed how the military has changed since they first joined, discussed the stigma of pregnancy in some command environments and talked about balancing civilian life and their military careers while serving in the Army Reserve.

The military has not changed. It has self-destructed like one of Mr. Phelps’ reel to reel decks. 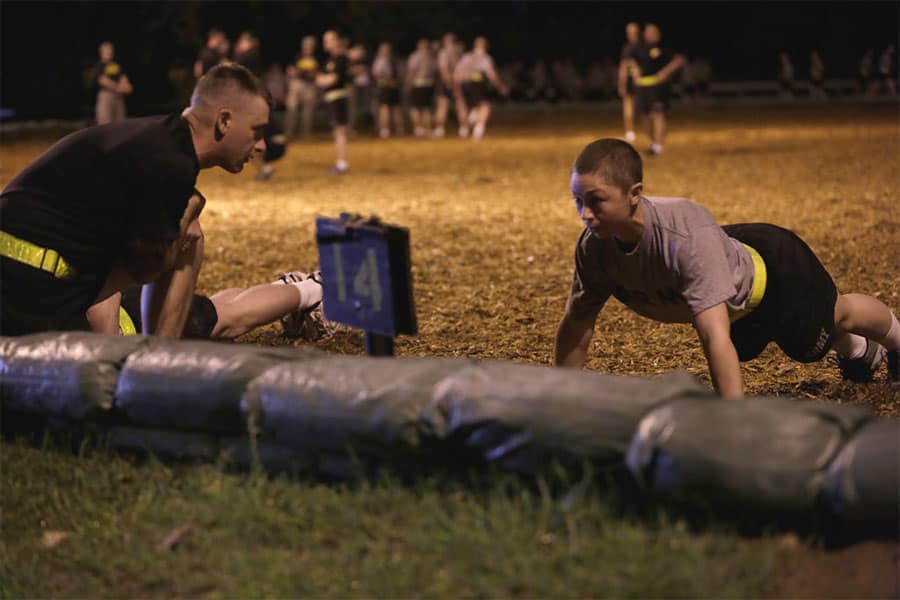 No Female could pass the Ranger School strength test, but they passed away.

Well, General Link. If the Army wanted you to have a kid, they would have issued you one.

“The Army Reserve has been very good as far as being able to balance those other priorities in my life,” said Brig. Gen. Lisa Doumont, commanding general, Medical Readiness and Training Command.

“I had twins, and then I was pregnant with my third son, so I said, ‘You know, I want to be around,’ so I left active duty and came into the Army Reserve. It’s been wonderful,” she said.

Absolutely! The Army exists to serve the needs of pregnant soldiers. And, with the Army’s new breastfeeding and lactation policies, pumping and storing breast milk in the field was never easier! Remember, to balance lactation support with readiness!

Lt. Col. Angela Wallace, public affairs officer, Army Reserve Medical Command and moderator for the event, opened the roundtable discussion and set the scene for the panel, stressing how America’s security thrives when relying on every service member’s talents, regardless of gender.

Obviously, Wallace has never been in a war, much less a fire fight, much less within 5000 miles of any shot and shell. She should ask any surviving veterans of Iwo Jima, Okinawa, Pelelieu, Omaha Beach and the Bulge, how having women in the combat arms would have added anything except total disaster to those military operations and battles.

When Garcia was asked about her experience as a military police officer, she said, “This was one of those branches that had been open to women for quite some time.”

“(Military police) run gun trucks ahead of the infantry to clear the roadways and make sure they can get to where they need to go. We’ve been doing that for years,” she said.

I’m not sure what Garcia is talking about, but it’s actually the infantry that seize and hold ground, not the military police. But, keep on dreaming, general.

“Whoa, what happened here? What’d you go and do that for?” and “Soldier! What kind of uniform are you wearing? Is that the right uniform?” Bingham repeated. “Today, the military services are more pregnancy friendly. Maternity uniforms are available for pregnant service members and pregnancies are no longer seen as a hindrance or inconvenience.”

No, pregnancies are no hindrance at all. In fact, throughout history there are thousands of examples of pregnant soldiers fighting in battles, in fact whole units that were in fact, pregnant. Who can forget the 10th Welch ‘Bun in the Oven’ Regiment at the Somme? Where has the military been all this time?  Of course, the pregnant soldier is completely non-deployable, but don’t worry about that. The important thing is that the military is a big social welfare program and is there to provide its soldiers with cradle to grave benefits.

Maternity Army Combat Uniform… Let that bit of total lunacy roll around in your cabeza for a moment.

God help us all.

Of course when questioned about the feminist destruction derby taking place in the military, the first thing out of the liberal mouth is that real bastions of militarism and prowess like Sweden have women in the infantry.

Bravo for the Swedes – they faded out as a group of bad ass killers in about 1100 A.D. with the advent of Christianity in Scandinavia. The only Vikings left are the guys from Minnesota who now play in a domed stadium because the snow is tough on their fragile Millennial bodies.

Message to the Obama loyalists and feminists in the US Military. We ain’t Sweden. We ain’t Belgium. We ain’t Canada, nor are we Germany, a country that gave the world Rommel and the Afrika Korps, but now couldn’t find ten men with testosterone running through their veins.

On the contrary, the USA has some very tough and very determined enemies, enemies who will bringing planes, tanks, ships and MEN to the next war with us. And, we are in the process of committing national suicide.

I have a few questions for Generals Garcia, Bingham, Wallace and Link:

How does the integration of women into the combat arms increase or maintain a unit’s operational tempo?

How does the integration of women into the combat arms increase a unit’s strength?

How does the integration of women into the combat arms increase or maintain esprit de corps and the camaraderie of men in battle?

How does the integration of women into the combat arms not create a high school atmosphere in what was once a hard-nosed, all male, efficient group of steely eyed killers?

How does the integration of women into the combat arms increase or maintain our national security?

Do you understand that our enemies, who will be bringing only men to war, view us as politically correct imbeciles?

Besides given feminists a big warm and fuzzy, how does the integration of women into the combat arms do anything, but turn the US military into a feminized weakling?

Will you take responsibility for the thousands of dead women who will be arriving home in flag draped coffins in our next conflict, casualties of your stupidity, selfishness and dishonesty?

Of course you won’t. People like you never do.

The Day of Delusion speaks volumes about the current politically correct atmosphere that is burning down the military.

Infantry Women, National Security Equals Gender Neutrality, the Army is a Welfare Program and Pregnancies are No Hindrance to Combat Readiness.

The Hour of the Clusterfu*k is rapidly approaching and there is no one who has the guts to stop it.