John 3:19 And this is the condemnation, that light is come into the world, and men loved darkness rather than light, because their deeds were evil. (20) For every one that doeth evil hateth the light, neither cometh to the light, lest his deeds should be reproved. 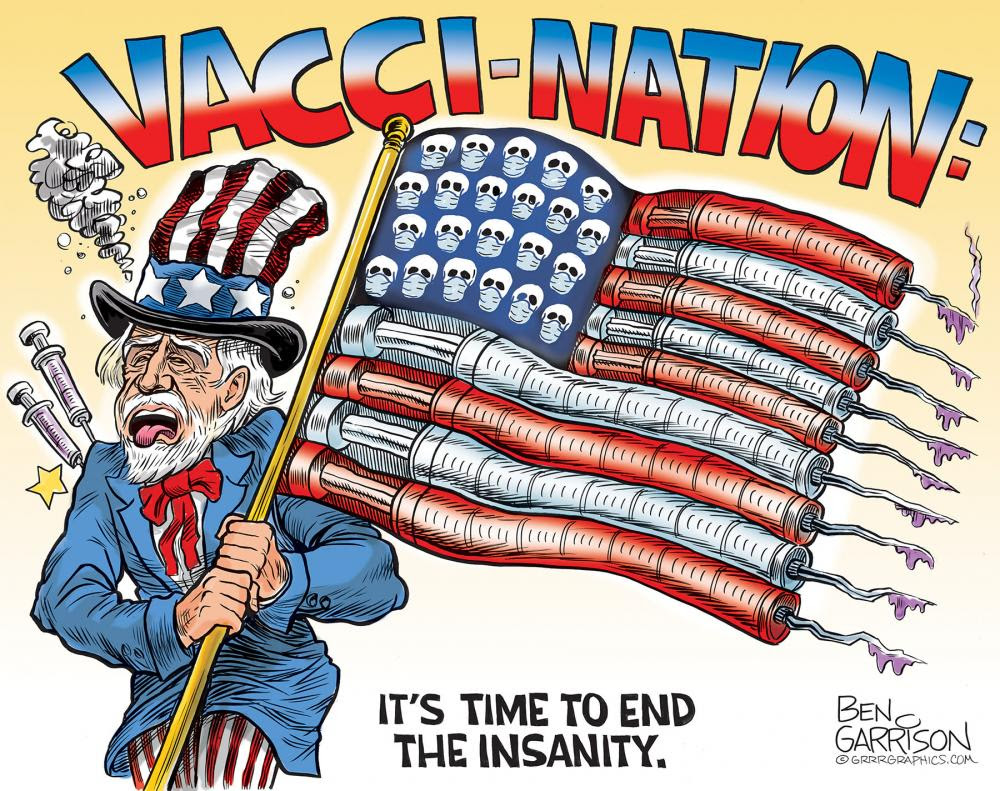 “I Don’t Know Of A Bigger Story In The World” Right Now Than Ivermectin: NYTimes Best-Selling Author If we have Ivermectin and Hydroxychloroquine as cures for Covid 19, why do we need a genetic medical experiment being passed off as a “Vaccine”? On top of this are all the lies we were told about everything. I have every right to think the worst about these criminals that they are doing it for money and depopulation. These criminals are as ruthless as the their Nazi fathers, and they have us in their crosshairs.

Dr. Michael Yeadon: ‘Not One Of Those Things Is Supported By The Science’

From article:”Yeadon rightly notes that everything we’ve known about virology and infectious disease has been turned upside down during this pandemic. None of the standard responses known to protect people from infectious disease was followed. Normally, you quarantine the sick to contain the infection.

Locking down entire societies has never been done and has no foundation in science or the history of epidemic control. Similarly, mass testing people without symptoms is without precedence. It simply isn’t done, and for good reason. It’s a waste of resources because as Yeadon explained earlier, we know how viruses spread. This isn’t our first rodeo. We’ve dealt with infectious epidemics before.

We know how viruses work in the body. When you have an active infection, you develop symptoms as your body mounts its defense. Without symptoms, your viral load is too low to pose a threat, either to yourself or others. The myth about asymptomatic spread has been a fear tactic.

Chicago archdiocese: Parishioners must show ‘proof of vaccination’ to be maskless This Catholic archdiocese is following whatever the state says and leading their people into destruction. They are preparing them for the Mark of the Beast.

Nobel Prize winner: Mass COVID vaccination an ‘unacceptable mistake’ that is ‘creating the variants’ This is an excellent warning about the great danger of the Covid 19 “vaccine”.

After Mexico City introduced ivermectin plan, COVID hospitalizations and deaths disappeared There cure is available, but the criminals at first lied and tried to block it. Now they just ignore it, while promoting the “vaccine” which is a genetic experiment. They are beyond evil.

U.S. Intelligence Community Already Knows that Covid Came from the Chinese Bio Lab I think the CIA was in on it as part of the NWO. How could the CIA do nothing while all those lies were being put out causing massive deaths and misery! They are corrupt to the core.

Moderna’s top scientist: ‘We are actually hacking the software of life’ This is full of great information.

Open letter to Israeli Prime Minister and Health Minister: ‘Clarify the confusion’ This letter is fantastic and gets right to the heart of there is no need for this “vaccine”.

Gov’t Scientific Advisors Admit To Using Unethical, Totalitarian Fear Tactics To Control Population All the lies and half-truths to gain what? Why did they use the fear and what was their objective? These people were direct tools of satan.

The role of vaccinations in India’s SURGING death rate can no longer be denied Is what’s happening in India right now, what the NWO has planned for the entire planet?

Superparamagnetic nanoparticles delivered via vaccines; Operation Warp Speed a TRAP for Democrats, and the engineered collapse of America accelerates I watched video about a magnate that was held on the spot where a person took the Covid 19 shot; the magnate held to the spot! I didn’t know if this was real, but now we know it was! Just what is in this “vaccine”? It is a product of the NWO, and its clear this looks like a death machine!

“Jewish Group Condems Sen. Sanders for Antisemitic Racism, Accusations against Jewish State, and Anti-Israel Legislation” Sanders is a Jew who loathes not only America but also Israel.

The Insidious Technocrat War On Food And Human Diet Remember the history of the Communists. They used food as a weapon to starve masses of people to death. The hate and loathe us, so there is no doubt in my mind they would move to starve us to death. It looks like they are using “global warming” as a wedge to control farming.

Unequally Woked: One Teacher’s Stand to Stop the Left This is a great article about one teacher who stood upon the truth. What a radical idea, standing on truth!

From article:”When Jonathan stood up in the school board meeting last month, his goal was to warn local parents. Thanks to a powerful message that caught fire online, he ended up warning a lot more. “A man cannot menstruate,” he argued when it was his turn for public comment. “A man cannot lactate and breastfeed a child. You cannot give birth if you’re a man. If you want to be an adult and do whatever you want with your life, I’m okay with that. Don’t push this ideology on children. I’m not going to work in a district that’s okay with that… Parents are already pulling their kids out of public school… They’re going online is going to increase as this liberal ideology comes into our schools. This isn’t a political indoctrination camp, okay? It’s public education. We want to teach education, not Left-wing ideas that aren’t backed up by facts or science.”

“Anthony Fauci Admits Funding Wuhan Lab but Still Denies ‘Gain of Function’ It has been obvious Fauci lied over and over from the beginning. He is a real criminal responsible for the death of masses amounts of people, and all the misery associated with Covid 19. He worked with the Chinese Communists to create and loose a bioweapon upon the USA and the entire earth. He also suppressed the cure and then promoted a bio weapon “vaccine” which looks like a death machine. He is a monster along with all who supported and protected him.