Transgendered and Restrooms: Just a Step Toward Androgyny

Genesis 5:1,2  This is the book of the generations of Adam. In the day that God created man, in the likeness of God made he him; Male and female created he them…

What is becoming very clear is that the Hard Left delusion is much deeper and greater than most of us think. The acceptance of homosexuality is just the tip of the iceberg, but beyond this is a direct assault on God’s creation both of mankind as female and male, and of the family unit! The goal is the destruction of humankind as God created it, and its replacement with something that is unrecognizable – a monster! The idea of male and female is now under direct assault by these reprobate minds. They hate God, and therefore want to destroy his creation and anyone that identifies with the Lord. I am amazed at the depth of just how destructive the reprobate mind is, and how it is so rebellious against anything connected to God. It wants to destroy even the concept of male and female!

This is a huge part of satan’s agenda coming to light, and right now he is directly using Obama’s reprobate mind to promote it. This is coming so fast that it is an indicator there is not much time left before the manifestation of the antichrist and the Second Coming of Jesus Christ with his bride. The “Days of Noah” are now upon us.

Matthew 24:37 But as the days of Noah were, so shall also the coming of the Son of man be. 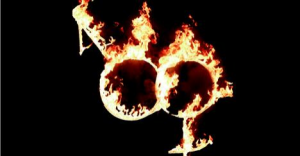 Bathrooms are just the beginning: a scary look into the trans movement’s end goals 05/15/16  This is a must read article about where the homosexual movement is heading. This movement is a direct assault by satan that God made us male and female in the image of God.
This entire homosexual agenda has an end game, and it is destroying the sexes as we know it. Please take this seriously as who would have though 20 years ago that homosexual “marriage” would be legal
As the nations rebel against God, they are being turned over to satanic control for God’s end time judgment.
We must stand against this in the name of Jesus until He comes to take us home with Him. We are His witnesses to the truth.

“The battle over men accessing women’s bathrooms and vice versa has little do with bathrooms or even transgenderism, a well-known LGBT activist admitted last week. It has everything to do with re-working society and getting rid of the “heterobinary structure” in which we live—eliminating distinctions between “male” and “female” altogether.
Riki Wilchins, who has undergone “sex change” surgery and is a far-left social change activist, wrote in the gay publication The Advocate last week that social conservatives and many LGBT activists are missing the point when it comes to the transgender bathroom debate.
The title of Wilchins’ article makes the points succinctly: “We’ll Win the Bathroom Battle When the Binary Burns.”
People should be able to enter whatever bathroom “fits their gender identity,” Wilchins wrote, but the fact that we even have “male” and “female” bathrooms reflects something about society that needs to change.
There are many “genderqueer” or “non-binary” people, Wilchins wrote, pointing to a student who recently “came out” to President Obama as “non-binary” at a London townhall as a notable example.
“Non-binary” people don’t identify as male or female and they often want to be referred to as “they” or “hir” or “zer.” So the fact that there are even intimate facilities that reflect the “binary” truth about gender should change, Wilchins wrote.
In the eyes of LGBT advocates, the notion of only two genders (which one can pick, of course) is antiquated.
But transgenderism inherently acknowledges and actually reinforces the binary nature of gender.
Transgenderism presumes that a man can be “trapped” inside a woman’s body and a woman can be “trapped” inside a man’s body. It encourages men “becoming” women to embrace femininity and wear dresses and make-up. Similarly, transgenderism encourages women “becoming” men to make themselves more masculine through hormones and by altering their appearances, reinforcing the notion that men look and act a certain way.
“The long-term goals of many LGBT activists are actually not just access to the restrooms of their preferred gender identity, but actually destroying the concept of gender or the separation of the genders altogether,” Peter Sprigg, Senior Fellow for Policy Studies at the Family Research Council, told LifeSiteNews. Sprigg noted that when LGBT activists are appealing to a mainstream audience, they “are accepting or implicitly accepting the separation of male and female facilities” like bathrooms.” 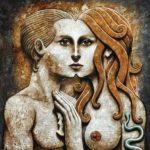 (Blog Post) Transgenderism, Androgyny and Occult Godhood  This a post originally done on February 21, 2016, but because the issue is coming to the fore with all of the transgender legislation, it’s a valuable resource because the articles/videos in it cover what’s really going on – and why. There’s a hidden agenda behind all of this social transformation, as the first article makes clear. But the reasons for that are spiritual. Below is the Commentary and the first article from that post, but we’d urge you to view the entire post, including videos.

German (1750) Hermaphroditic figure, the accomplishment of the magnum opus, according to Manly P. Hall, in “The Secret Teachings of All Ages”

Anyone with eyes to see is aware of the gay/transgender agenda that’s being pushed on us. According to a recent Center for Disease Control (CDC) study, only a little over 3 percent of the American population is homosexual. An even tinier percent is transgender. Yet the entire culture is being turned on its collective head in an effort not just to accept this dysfunction, but to force everyone to celebrate it, whether they agree with it or not.

It’s apparent that there is an agenda which is being driven from hell by both elites and media, with the population being indoctrinated and subdued so that there will be no dissent. But why is this occurring? That’s the subject we address in this post as it appears we are now living in the “Days of Noah”. It doesn’t have anything to do with tolerance but indoctrination; it’s because the satanic elite who are behind so much change see androgyny as the ultimate state of being. According to occultists, only gender-neutrals can rise to godhood. The fallen angels they worship are seen as androgynous, and this is driving the modern transgender program. Of course, this is in direct contradiction to God’s word:

Genesis 5:1-2 This is the book of the generations of Adam. In the day that God created man, in the likeness of God made he him; Male and female created he them …

This is a long-term goal of the elite, first openly articulated in the work of Saint-Simon (a French social philosopher and reformer) around 1813, which through his disciples led to many of the tenets of Marxism in the mid-nineteenth century. But it really came into its own as an agenda to pursue with the 1893 Parliament of World Religions at the Chicago World’s Fair. This is where the goal of a one-world religion and political system was first embraced openly by organized religion, although the work of Saint-Simon laid the groundwork for the linking of the two areas in modern theory.

On another level, there are plans to undermine traditional Judeo-Christian morality, and to destroy the family and the social structure which requires strong families. In order to bring about a new paradigm, a one-world government and pagan religious structure, it’s first necessary to do away with any sense of traditional values. Because of this, it isn’t just the transgender/gay agenda which is being thrust upon us.

But at a deeper level there’s more than just social transformation going on. This is about spiritual transformation, and the goal of preparing society to accept the Antichrist and the pagan religious system which will be part of the 666 Beast System, spoken of in the Bible. It’s just around the corner, so the indoctrination is proceeding at an increasingly rapid pace. It’s about Satan’s goal of destroying everything in creation as God originally made it, and especially the destruction of humanity created in God’s image. It’s occurring quickly because the time for his rise is almost upon us. Thankfully, his reign will be short-lived, as the Bible not only tells of this system’s rise but of its total destruction at the return of Christ.

That’s why it’s time to draw close to Christ, to spend time in His Word, and to repent both for our individual sins, and for those of the nation. Use the information contained in this blog to reach those who either are falling prey and buying into to this massive campaign of corruption and transformation, or who are too cowed by the fear of consequences over political incorrectness to stand strongly against these forces. It’s time to make living for Christ, and reaching others for Him, the priority in life.

Romans 1:26, 28  For this cause God gave them up unto vile affections: for even their women did change the natural use into that which is against nature…And even as they did not like to retain God in their knowledge, God gave them over to a reprobate mind, to do those things which are not convenient;

Thomas (formerly Tracey) was unveiled on Oprah in 2008

How The Trans-Agenda Seeks To Redefine Everyone  As you can see, they are really serious about destroying male/female distinctions and identity. This is an excellent article from The Federalist, worth reading for a good overview of how this agenda is being implemented, both socially and legally.

Did you think only women get pregnant? Or only women get abortions? Planned Parenthood and NARAL—ironically both pro-abortion organizations that self-identify as champions of women’s rights—may soon be trying to change your mind about that.

So what does this mean and why should we care? Well, maybe Exhibit A should be Oprah Winfrey introducing us to “the first pregnant man” in 2008. This would be a woman named Tracey who “transitioned” to being Thomas by having a double mastectomy with a dose of hormones to produce facial hair and such. Thomas thought it would be nice to have a baby someday, and so decided to keep “his” vagina, uterus, and ovaries intact. But for some reason, even though Thomas was legally documented as male, she (oops!) needed a sperm donation. (Life isn’t fair.)  In this scheme of things, using the pronoun “she” to refer to a person who goes through pregnancy and gives birth to a child is grounds for punishment.

So what does it all mean? At root, this isn’t really about people like Thomas. It’s mostly about everybody else. It’s all about changing you and your self-concept. As fringy as they may sound, injecting such lies into our language—“the pregnant man” and the push to separate the word “pregnancy” from the word “woman”—are clear signals that we are moving steadily towards erasing all gender distinctions in the law.

And why should we care? Because erasing gender distinctions, especially as they apply to childbearing and rearing, would serve to legally un-define what it means to be human. A new legal definition of human—as neither male nor female—would apply to you whether you like it or not. Already, there is social pressure for everyone to comply with the gender theory notion that biological facts are mere “social constructs.”
We should especially care because we are well on the way to enacting such laws already.”

Deuteronomy 22:5  The woman shall not wear that which pertaineth unto a man, neither shall a man put on a woman’s garment: for all that do so are abomination unto the Lord thy God.