USA COURTS: “throne of iniquity … which frameth mischief by a law” 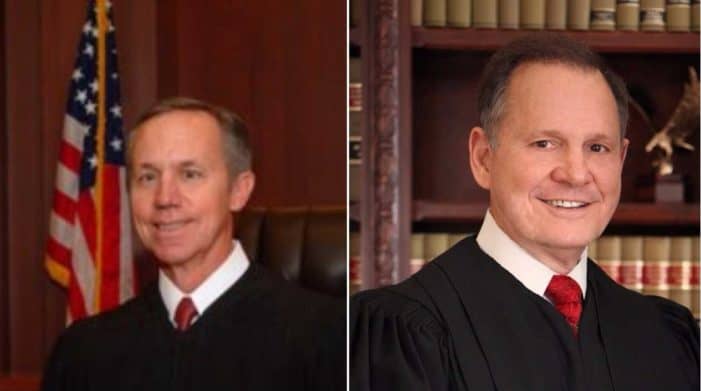 Judge J. Michael Joiner who wrote the opinion to remove Judge Roy Moore is a “wonderful, faithful, Bible teaching Southern Baptist!” He turns my stomach and needs to be rebuked by the pastor of his church! It would not be so bad if a hardcore leftist wrote this opinion to remove Judge Moore, but no, it is a very religious Southern Baptist man! This “judge” has no fear of God whatsoever. What is this “judge” going to say when he stands before the Lord, who is the Judge in his supreme court?

I see him as a Judas. He needs to repent and ask the Lord to take out of him this love of the world, which controls him, over the fear of God and his word.

Isaiah 59:3-4 For your hands are defiled with blood, and your fingers with iniquity; your lips have spoken lies, your tongue hath muttered perverseness. None calleth for justice, nor any pleadeth for truth: they trust in vanity, and speak lies; they conceive mischief, and bring forth iniquity.

I posted the entire article because you need you know what this Southern Baptist judge did to Judge Moore, who stands for the word of God.

“Just two years after striking down the state’s law criminalizing sodomy, the chief judge of the Alabama Court of the Judiciary (COJ), who also serves as an elder and Bible teacher at The Church at Brook Hills, joined his colleagues in their unanimous decision to suspend Alabama Supreme Court Justice Roy Moore on Friday.

“[I]t is the unanimous judgment of this Court that Chief Justice Moore should be suspended from from office without pay for the remainder of his term,” Judge J. Michael Joiner wrote for the panel of nine judges.

As previously reported, according to his biography, Joiner is an elder and Bible teacher at The Church at Brook Hills in Birmingham, formerly led by “Radical” author David Platt, who now serves as the president of the Southern Baptist International Mission Board.

“He is an active member of The Church at Brookhills where he teaches a Bible study class,” Joiner’s judicial bio reads. “He previously served as Deacon and Chairman of the Shelby Baptist Association Credentials Committee.”

“Mike Joiner and his wife, Cathy, … have been members of Brook Hills since 1998,” the Church at Brook Hills also outlines on its page listing Joiner as being on the administrative elder team.

“Mike is a judge for the Alabama Court of Criminal Appeals. Mike currently leads a small group on Sunday mornings and recently served on a mission trip to Honduras. He plans to return there this year,” it continues. “Mike believes his spiritual gifts are teaching and administration.”

In 2014, Joiner, who serves on the Alabama Criminal Court of Appeals, likewise joined his colleagues in striking down a state law that criminalized those who engage in “deviate sexual intercourse with another person,” and “[c]onsent is no defense to a prosecution.”

The case, Williams v. Alabama, centered on a Dallas County man who sodomized another man after forcing him to drop his pants, and was sentenced to 12 months behind bars for sexual misconduct under the law.

“The Supreme Court concluded that the statute violated the Due Process Clause of the Fourteenth Amendment to the United States Constitution and that it ‘further[ed] legitimate state interest which can justify its intrusion into the personal and private life of the individual,’” the justices wrote. “Because ‘[t]he only federal court whose decisions bind state courts is the United States Supreme Court’ Lawrence controls our decision.”

On Friday, Joiner described Moore as one who has wasted taxpayer money by being placed on trial, and has a record of being defiant. He pointed back to Moore’s removal in 2003 when he refused to remove the Ten Commandments from the Alabama Supreme Court.

“[T]his is the second time Chief Moore has caused himself to be brought before this court for taking actions grossly inconsistent with his duties as chief justice and in violation of the Canon of Judicial Ethics,” he wrote. “The result in both instances has been a lengthy, costly proceeding for this court, the JIC, and, most unfortunately, the taxpayers of this state.”

He said that Moore’s use of case law in his memo to state probate judges surrounding the issuance of “gay marriage” licenses was “incomplete, misleading and manipulative.”

“Just as Chief Justice Moore’s decision that he wouldn’t ‘move the [Ten Commandments] monument,’ was, in fact, defiance of the federal court order binding him, a disinterested reasonable observer, fully informed of all the relevant facts, would conclude that the undeniable consequence of the January 6, 2016 order was to order and direct the probate judges to deny marriage licenses in direct defiance of the decision of the United States Supreme Court,” Joiner wrote.

He pointed to the Supreme Court’s words that its decision applied “in all states,” which meant, Joiner said, that its ruling superseded all lower court decisions nationwide. Moore had rather believed that the Supreme Court’s ruling only applied to the states involved in the case: Michigan, Kentucky, Ohio and Tennessee—and not Alabama.

As previously reported, Moore had stated during his trial before the COJ last week that he did not “encourage anyone to defy a federal court or state court order,” remarking that it is “ridiculous” to believe otherwise.

“I gave them a status in the case, a status of the facts that these orders exist,” he said. “That is all I did.”

But the COJ said in its decision that it did not agree that Moore’s Jan. 6 memo was “merely to provide a ‘status update’ to the state’s probate judges,” but could indeed be considered an order not to issue licenses to homosexuals in defiance of the U.S. Supreme Court.

Therefore, it declared Moore guilty of failing to “perform the duties of his office impartially,” failing to “avoid impropriety,” failing to “respect and comply with the law” and failing to “abstain from public comment about a pending proceeding in his own court,” among other charges.

“For these violations, Chief Justice Moore is hereby suspended from office without pay for the remainder of his term. This suspension is effective immediately,” Joiner wrote.

The Church at Brookhills did not return a calls for comment, and a secretary would not confirm Joiner’s position as elder although his information is posted on the church website.

Christian News Network previously spoke with Executive Pastor Dennis Blythe, who stated that he didn’t see Joiner’s ruling in the Alabama sodomy case as being a concern, but said he would pass the information on to Senior Pastor Matt Mason. None of the members of the megachurch that Christian News Network spoke to said that they knew Joiner.

Mason was unable to be reached for comment and messages were not returned.”