Netanyahu aide said to admit US in no mood for annexation, so PM won’t go ahead

Joel 3:2 I will also gather all nations, and will bring them down into the valley of Jehoshaphat, and will plead with them there for my people and for my heritage Israel, whom they have scattered among the nations, and parted my land. 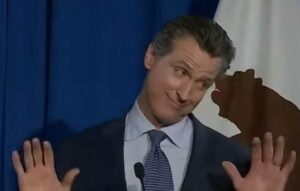 “Unconstitutional Abuse of Power” – Three California Churches Sue Gavin Newsom Over Singing Ban”It is so obvious that these God hating governors want to close the churches just like they are doing in China. The Hard Left minds are exactly the same as the Chinese Communists.

Newsom on July 1st closed churches, gyms, hair and nail salons, indoor malls in Los Angeles and 29 other counties including Orange County, Ventura, Santa Barbara, San Diego and all other counties in Southern California. There is no end date to the lockdown and Newsom said Black Lives Matter protests are allowed!”

DIVIDING THE LAND OF ISRAEL 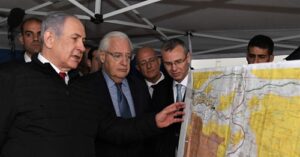 “Netanyahu aide said to admit US in no mood for annexation, so PM won’t go ahead”

“Knesset Speaker Yariv Levin has acknowledged in private conversations that no attention is currently being given in Washington to Israeli plans to annex up to 30 percent of the West Bank, according to a Tuesday Army Radio report.

As a result, Levin reportedly said, the controversial move will likely have to be placed on the back burner as Prime Minister Benjamin Netanyahu will not move forward without coordinating with the Trump administration. The US administration’s attention is elsewhere, the report claimed Levin had said, and “it is not listening” when it comes to annexation.”

HARD LEFT MURDER OF THE ELDERLY 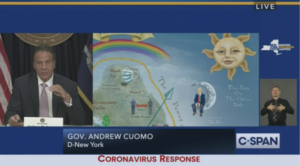 “TOTAL FAILURE: New York State and Governor Cuomo Had the Worst Coronavirus Death Ratio in the World – Higher than Any State and Higher than ANY NATION!” He is a cold bloody killer of the elderly. He forced sick coronavirus patients into the nursing homes which resulted in over 6000 deaths! He tried to blame this on President Trump and then the staff at the homes! He is a real reprobate who needs to in prison for murder!

“On Monday New York Governor Andrew Cuomo released a poster at his press conference Monday that celebrates his response to the COVID-19 China coronavirus that devastated New York state and especially New York City this year. New York state ended up being the epicenter of the coronavirus. The state totaled over 32,000 deaths. The new poster is cynically topped with a statement by Cuomo, “Wake Up America! Forget the Politics, Get Smart!”

This is an outrageous statement by the New York Governor especially considering New York State has the worst coronavirus numbers in the world. The mortality rate in New York is significantly higher than any country in the world.” 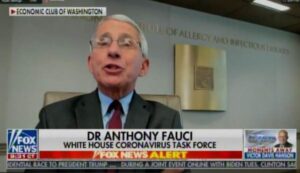 “Democrats Defend Fauci After White House Puts Out List of His (Deadly) Coronavirus Mistakes” Huge numbers of people died because this man blocked the cure. He is a Hard Left operative in the NIH to push big pharmacy and the Hard Left agenda against President Trump.
It seems the government is loaded with operative just like him in every area!

“The White House put out a statement to the Washington Post listing several mistakes by Dr. Anthony Fauci about the COVID-19 Chinese coronavirus pandemic. While the White House did not characterize Fauci’s mistakes as “deadly”,
Fauci’s mistakes clearly cost American lives as the public and the government heeded his advice early on that downplayed the seriousness of the virus that has since killed nearly 140,000 Americans this year. Democrats rushed to defend Fauci.” 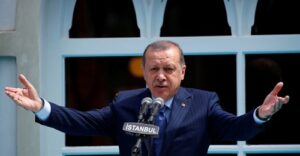 The decision to change the status of the ancient Hagia Sophia church, which had been transformed into a mosque in 1453 and then into a museum in 1934, was made controversially last week.

It follows an increasingly religious authoritarian agenda from Ankara that has made Turkey the world’s largest jailer of journalists, seen dissidents imprisoned for “terrorism” and witnessed increasing military invasions of neighboring countries by Turkey.” 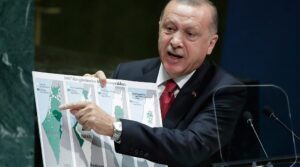 “Is Turkey’s Erdogan out to destabilize Middle East?” There is no doubt that Erdogan has his eyes on Jerusalem, but he first must conquer Syria. His actions in the last couple of weeks that he might be ready to make the move and head to war with Israel and capture Jerusalem. According to the Bible he does not succeed!

“Turkish forces are at the present time bolstering newly constructed outposts in Iraqi Kurdistan. The Turks have established five new positions on mountainous terrain near the villages of Sharanish and Banka, in the Zakho area adjoining the border with Turkey, since commencing operation in the area in mid-June. Troops have been transported in by helicopter to man the new positions.

This is the latest phase in an operation that has brought the Turkish armed forces to 30 kilometers (18 miles) inside Iraqi Kurdish territory. Operation Claw-Tiger was launched on June 17, following Turkish air attacks on targets Ankara identified as associated with the PKK at a number of sites in the Kurdish Regional Government-controlled area. The areas destroyed in the airstrikes included a number of Yezidi villages in the Mount Sinjar area.”

GOD’S JUDGMENTS FROM ALL ANGLES 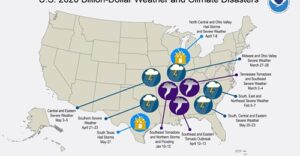 “US hits 10th billion-dollar weather disaster of the year — at a record pace” The deeper the nation gets into sin, the more judgments hit. It appear the judgments are matching the level of sin.

“The United States has hit its 10th billion-dollar weather disaster earlier than any other year, making 2020 the sixth consecutive year with at least 10 extreme weather events — also a record, according to the National Oceanic and Atmospheric Administration (NOAA).

The 10 storms have tormented the US with tornadoes, damaging winds and hail. Seven of the 10 storms occurred in the South or Southeast, including three tornado outbreaks. The Easter Sunday outbreak alone saw 190 tornadoes tear across the region, killing 36 people.”

“Flooding in China Has Resulted in 141 People Missing or Dead and 38 Million Displaced – Could Get Much Worse If Three Gorges Dam Breaks” There is no end in sight for the torrential rains in China which is causing massive flooding. The Tree Gorges Dam is buckling and could burst. The damage to China would be catastrophic! The Chinese economy is already in trouble and the dam bursting would wreck havoc on China!

“Millions have been displaced in China due to recent flooding in the country.The Asian Review reports: Despite reassurances by the government, residents along China’s rivers are increasingly worried that the mitigation capabilities of the Three Gorges Dam might fail after heavy rains lashed parts of the country.

Some 141 people are already missing or dead, and nearly 38 million people have been evacuated since alerts were triggered in June about the flooding of 433 rivers nationwide, the country’s flood control authorities said on Monday.” 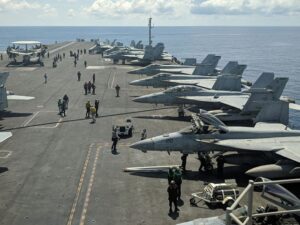 “Chinese State Media Asks if U.S. Is ‘Mentally Retarded’ for Disputing South China Sea Claims” China is nothing more than a bully that just took large tracks of the Pacific Ocean because it was call the South China Sea. This would be like Mexico taking the Gulf of Mexico because of its name!

“The United States rejected China’s claim to own offshore resources in the South China Sea on Monday, prompting a response from Chinese media questioning the mental stability of the U.S. government. Chinese state media responded Wednesday by wondering if the U.S. government is “mentally retarded and slow in action.”

Secretary of State Mike Pompeo on Monday announced the rejection of Beijing’s claims to “offshore resources across most of the South China Sea” as “completely unlawful.” He also denounced China’s “campaign of bullying” against other claimants.” 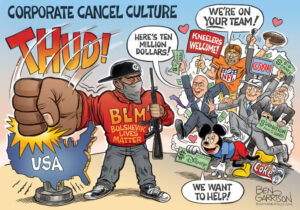 MEME: Corporate Cancel Culture
BLM is a Communist, God hating, America hating, family hating terrorist organization! Look at the traitors who support BLM. This is an excellent meme.
If you like our ministry, please consider making a donation to keep us going. May the Holy God of Israel bless you!
Revelation 22:20 He which testifieth these things saith, Surely I come quickly. Amen. Even so, come, Lord Jesus.
Share