New active volcanoes around the world

1 Corinthians 6:2-3  Do ye not know that the saints shall judge the world? and if the world shall be judged by you, are ye unworthy to judge the smallest matters?
Know ye not that we shall judge angels? how much more things that pertain to this life?

There are earthquakes and volcanic eruptions occurring at unprecedented rates across the globe. The dramatic increase of both frequency and intensity should remind everyone of the prophetic words of Jesus about natural events just prior to his return.

But are they really increasing or is it just that we’re more aware of them? “In 1973, there were only 24 earthquakes in the US measuring over 3.0. Between 2009-2015, the number has jumped to 318. And just in the central US alone during the first three months of this year, the number of 3.0 or higher quakes have soared to 226.” No, it isn’t just our perception.

While the destruction and fear these events cause are real, they should cause us also to look up in anticipation, because they are signs of His soon return.

Isaiah 29:6  Thou shalt be visited of the Lord of hosts with thunder, and with earthquake, and great noise, with storm and tempest, and the flame of devouring fire.

New active volcanoes around the world: Sakurajima (Japan), Reventador (Ecuador), Poas and Turrialba (Costa Rica) 07/26/16  Earthquakes and volcanic eruptions are increasing, both in intensity and frequency, just as Scripture prophesied would happen in the last days. This is a tangible sign that time is winding down.

“Every day, new volcanoes are spewing plumes of ash and gas around the world.

Kagoshima’s Sakurajima volcano erupts, spews plume 5,000 meters up
High eruptive activity at Reventador volcano, Ecuador
The volcano is maintaining a high eruptive activity in the last two days. On July 26, 2016, a glowing crater and incandescent rocks rolling on the southeast flank of the crater have been observed.
In the last 24 hours, 76 explosions, 50 long period events, 3 episodes of tremor emission and 6 episodes of harmonic tremor were recorded.
Although heavy rains, no lahars have been generated yet.

Turrialba and Poas volcano eruptions on July 25, 2016
The Turrialba volcano exploded 4 times on July 25, 2016. The first eruption at 7:22am spewed ashes 3000 meters in the air:
One hour later, at 8:28am, the volcano sent a plume of gas and ash 1300 meters in the air:
Finally, a small freatic explosion was reported at the Poas volcano at 8:19 am with ash rising 50 meters above the crater.
Scary and beautiful as well!” 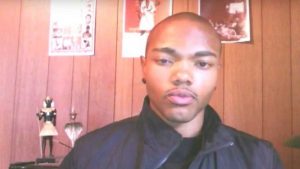 How the Media Covers Up Muslim and ‪#‎BlackLivesMatter‬ Terrorism 07/19/16  This is a good article which goes into the leftist agenda of the mainstream media and how invested they are in covering up anything which doesn’t fit their predetermined narrative. This is evil, disguised as spin.

Psalm 7:14 Behold, he travaileth with iniquity, and hath conceived mischief, and brought forth falsehood.

” No sooner are the bloodstains and bits of human flesh hosed off the concrete from the latest Muslim or #BlackLivesMatter terrorist attack and the grieving families ushered through the cold metal doors of impersonal morgues to identify the bodies of their loved ones that the vultures of the media rise above a wounded city and begin spinning the same old lies.
The propaganda, the artful selection and deselection of facts, have become as familiar to us as they were to any of the residents of the Soviet Union or North Korea. Anyone who pays attention knows not only that they are being lied to, but can easily predict the lies that they will be told on the evening news even before they actually hear them being spoken out loud.
We always knew that the Muslim terrorist, even before he was identified, would turn out to be a secular loner who was depressed over his family life. All the media had to do with Mohammed Bouhlel, the Islamic terrorist who murdered 84 people in Nice, France was to replay the same exact narrative as the one that they had fed us with Omar Mateen, the Islamic terrorist who murdered 49 people in Orlando.
Irreligious, depressed loner with family problems. Check. No connection to Islamic terrorism. Suggestion of mental illness. Check and check. Insistence on his lack of interest in religion? One final check.
Mohammed shouted “Allahu Akbar,” the ancient Muslim battle cry that originated with Mohammed’s murder of Jews whose meaning is that Allah is greater than the deities of non-Muslims, but the media persists in its dedication to burying the truth in a shallow unmarked grave at midnight behind CNN headquarters.” 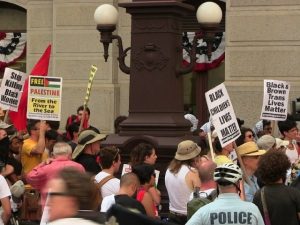 “Leftists at DNC: ‘Long Live Palestine,’ Destroy Israel, Support Black Lives Matter” 07/26/16  In case you think that the connection and coming coalition between Black Lives Matter activists and anti-Israel forces has no basis, here’s another article revealing the growing merger of the two causes and groups. The hard left agenda always opposes God and eventually they unite because that hatred is greater than any other issue which may separate them.

“The swelling numbers of leftist protesters surrounding the Democratic National Convention (DNC) are helping to lower the various groups’ inhibitions about showing their true intentions. Signs promoting Black Lives Matter can be seen waving next to signs calling for the destruction of Israel as the protesters chant, “Long live Palestine!”
The association between groups supporting Black Lives Matter and groups wanting to end the existence of Israel were made abundantly clear in the crowd. Several signs called for a “Free Palestine from the river to the sea.” 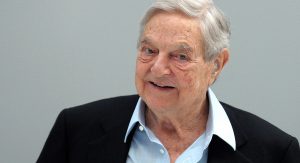 George Soros rises again 07/27/16  I consider this man to be the most evil man in the world. His money is behind numerous events linked with the hard left, Black Lives Matter, open borders, mass immigration, unlimited abortion and other causes.

“The billionaire investor, who scaled back his political giving after a then-unprecedented $27 million spending spree to try to defeat George Bush in 2004, has quietly reemerged as a leading funder of Democratic politics — and as a leading bogeyman of conservatives.
Soros has donated or committed more than $25 million to boost Hillary Clinton and other Democratic candidates and causes, according to Federal Election Commission records and interviews with his associates and Democratic fundraising operatives. And some of his associates say they expect Soros, who amassed a fortune estimated at $24.9 billion through risky currency trades, to give even more as Election Day nears.
The 85-year-old Hungarian-born New Yorker had planned to attend his first-ever Democratic convention here to watch Clinton, with whom he has a 25-year relationship, accept the Democratic presidential nomination on Thursday. But an associate said he decided to cancel the trip this week because Soros, who recently returned to active trading, felt he needed to closely monitor the economic situation in Europe.
Nonetheless, people close to Soros say he seems more politically engaged than he’s been in years, motivated they say by a combination of faith in Clinton and fear of her GOP rival Donald Trump, who Soros has accused of “doing the work of ISIS” by stoking fears.
Soros’s political adviser Michael Vachon said his boss “has been a consistent donor to Democratic causes, but this year the political stakes are exceptionally high.” Vachon added: “They were high even before Trump became the nominee because of the hostility on the other side toward many of the issues George cares most about and has worked to support for many years, including immigration reform, criminal justice reform and religious tolerance.” 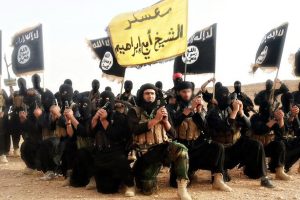 ISIS warn London ‘next to be attacked’ as UK churches put on terror alert after French priest murder 07/26/16  Both London and Washington, as well as churches, have been singled out as the next targets of ISIS terror attacks. Islam is being used by elites to bring chaos. But it’s also being used by God for judgment as Western nations reject his word and churches fall into apostasy. 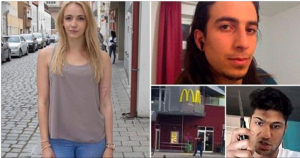 Merkel is RUINING our country!’ Germans revolt over four savage attacks by Muslims in a week… and blame ISIS terror attacks on the million refugees she welcomed in a year 07/27/16  Europe is reeling under the terror attacks by Muslim “refugees” but still they stand against Israel, and what they’re promoting is coming back on them.. They have turned against God and opened themselves to judgment – and it has come through Islam, which they have embraced by opening their countries to these immigrants.

“Angela Merkel’s open door policy to refugees is no longer welcomed in Germany following four savage Muslim attacks in a week.
Attitudes to Syrians seeking asylum has hardened after ISIS suicide bomber Mohammad Daleel blew himself up outside a wine bar in the quiet in the quiet Barvarian market town of Ansbach.
Other violence over the space of four days in the last week has left Germans feeling vulnerable and afraid. A new survey found that 83 per cent of Germans see immigration as their nation’s biggest challenge – twice as many as a year ago.
More than 200,000 failed asylum seekers like Daleel remain in the country – and many Germans blame Merkel for inviting more than a million refugees into the country in the past year without adequate background checks.
The mood sweeping Germany was summed up by mother of two Anna Lissner who said she now feared for her children’s safety.” 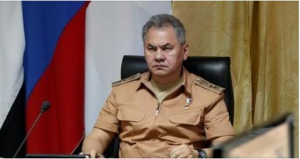 Russia beefs up military on southwestern flank as NATO approaches 07/27/16  If the situation between NATO and Russia continues on this path, it could be the trigger for war. They seem to be engaged in a game of moves and counter-moves that puts the world at risk, with neither showing any signs of backing down.

“Russia has strengthened its southwestern flank as NATO builds up its military presence near its borders and next-door Ukraine remains unstable, Russian Defence Minister Sergei Shoigu said on Wednesday.
Moscow has deployed more air defense systems in the southwest and has also deployed a “self-sufficient” contingent of troops in Crimea, Shoigu told a meeting at the Defence Ministry broadcast on state television.
“Since 2013 … we have formed four divisions, nine brigades and 22 regiments,” he said. “They include two missile brigades armed with Iskander missile complexes, which has allowed to boost fire power to destroy the potential adversary.”
Shoigu said “terrorist” groups were also active in the North Caucasus.”

Dark smoke hangs over scenic stretch of California coast 07/27/16  This is an update on the fire in California. While some progress has been made in the area near Los Angeles, it still is burning and spreading elsewhere, covering the coastal area with smoke and shutting down state parks and historic areas. One person has died, trying to rescue his dog before evacuating.

“A wildfire was fouling the summer season on a beloved and scenic stretch of the California coast, where smoke and the threat of flames forced the closure of state parks near Big Sur.
The blaze that has destroyed 20 homes was burning inland over a ridge and was not for the most part visible on the Pacific Coast Highway, which remained open Wednesday, but with its signature views hard to see in the dark haze.
“We wanted to see more of the ocean,” said Phoenix-area tourist Jim Newby, who drove along the highway with his family Tuesday. “We didn’t see a whole lot of it unfortunately, and it’s a beautiful, beautiful stretch.”
The blaze could very easily crest the ridge and make a run toward some of the beloved campgrounds, lodges and redwoods nearer to the shore, officials said. At least 2,000 structures were threatened.
“It is folly to predict where this fire will go,” California state parks spokesman Dennis Weber said.”

Revelation 8:5  And the angel took the censer, and filled it with fire of the altar, and cast it into the earth: and there were voices, and thunderings, and lightnings, and an earthquake.