James 4:1  From whence come wars and fightings among you? come they not hence, even of your lusts that war in your members?

It appears that war with North Korea is very close, and that it may well be fought with nukes. Hawaii is practicing civil defense drills, as Tokyo, Japan and Seoul, South Korea both are hastily moving citizens and evacuating major cities. The options rapidly are dwindling for dealing with this rogue regime, since China has refused to put pressure on North Korea and even is providing equipment to them.  Their latest missile launch, a confirmed ICBM (intercontinental ballistic missile) went higher than the space station! Even if it was shot straight up instead of laterally, that is far enough to reach Alaska had it been aimed in a different direction.

Russia and China are “signaling” that if the US strikes North Korea, they may have to support such a strike, given the danger that Kim Jung-Un is to the entire region. But would they really do so, given China’s relationship with the dictatorship? It doesn’t seem likely because China would be the big winner in any such war between the US and NK. At this point there is endless posturing by all of the parties and speculation about the ramifications of any action.

Are we at the brink of World War 3? It appears we may be. This war will be far different from the actions we’ve seen in the Middle East or elsewhere in recent history, and it appears that North Korea is being used as a proxy to begin such a devastating war, as well as to test President Trump.

Ecclesiastes 9:17  The words of wise men are heard in quiet more than the cry of him that ruleth among fools.

Kim Jong-un warns Donald Trump he is pushing North Korea to the brink of nuclear war 07/09/17  The rhetoric from North Korea is getting more warlike. It does feel like the war is very close. NK has pushed President Trump to the point of action. He has no choice.

Revelation 21:3  And I heard a great voice out of heaven saying, Behold, the tabernacle of God is with men, and he will dwell with them, and they shall be his people, and God himself shall be with them, and be their God.

“Kim Jong-un has warned Donald Trump he is pushing North Korea to the brink of nuclear war after the US and South Korea conducted a life-fire exercise on the peninsula.
The test was in response to North Korea’s successful attempt to fire an intercontinental ballistic missile (ICBM) last week.
The test sparked global alarm as it suggested North Korea now possessed an ICBM capable of reaching Alaska, a major milestone for the reclusive, nuclear-armed state.
Saturday’s drill, designed to ‘sternly respond’ to potential missile launches by the North, saw two US bombers destroy ‘enemy’ missile batteries and South Korean jets mount precision strikes against underground command posts.” 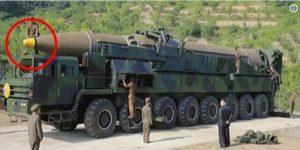 A tiny detail from North Korea’s missile launch points to an even more dangerous threat 07/09/17  How much time is left, or is it too late to stop NK? Remember, God destroys wicked cities like Seattle, San Francisco, LA and Las Vegas by fire. Are there any real pastors and Christians left in these areas to cry out to the Lord? If there are, where are they? Is there any fear of God left in America?

Revelation 21:10-11  And he carried me away in the spirit to a great and high mountain, and shewed me that great city, the holy Jerusalem, descending out of heaven from God, Having the glory of God: and her light was like unto a stone most precious, even like a jasper stone, clear as crystal;

“North Korea demonstrated its ability to reach the continental US with a nuclear-capable ballistic missile on July 4, but close analysis of launch footage may point to another dangerous technological development.
Unlike other North Korean missiles, the intercontinental-range Hwasong-14 missile uses a “shroud,” or a hollow cover instead of a more solid nosecone, researchers have discovered.
ICBMs generally use shrouds if one is “planning on launching multiple reentry vehicles or added countermeasures,” 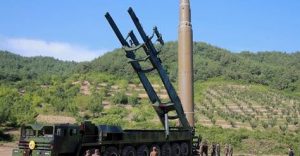 North Korea: The Rubicon is crossed 07/09/17  Over and over I have said that China is not our friend, and they are building up NK for war with America. China is the big winner in a war between NK and the USA. Think of this. Did you see pictures of NK with mobile missile launchers? They have huge ones which can launch the ICBMs. These launchers came from China! China provided what NK needs to go to war with America, including nuclear launchers! We must go by China’s actions and NOT their words.

Revelation 22:1  And he shewed me a pure river of water of life, clear as crystal, proceeding out of the throne of God and of the Lamb.

“How many times must we be taught that Beijing does not share our view of denuclearizing North Korea? It prefers a divided peninsula, i.e., sustaining its client state as a guarantee against a unified Korea (possibly nuclear) allied with the West and sitting on its border.
Nukes assure regime survival. That’s why the Kims have so single-mindedly pursued them. The lessons are clear. Saddam Hussein, no nukes: hanged. Moammar Gaddafi, gave up his nuclear program: killed by his own people. The Kim dynasty, possessing an arsenal of 10 to 16 bombs: untouched, soon untouchable.
What are our choices? Trump has threatened that if China doesn’t help we’ll have to go it alone. If so, the choice is binary: acquiescence or war.
War is almost unthinkable, given the proximity of the Demilitarized Zone to the 10 million people of Seoul. A mere conventional war would be devastating. And could rapidly go nuclear.”

The Blaze Torches CNN Over Trump Wrestling Tweet With Hilarious ‘Hostage’ Video 07/10/17  This is an incredibly funny retort to CNN by Brandon Morse of The Blaze, where he pretends to be the original creator of the Trump Wrestling Meme which pushed CNN over the edge and caused the entire internet to turn on the network. For the original story on the CNN debacle, see our earlier post: “#CNNBlackmail Story Goes Mega Nova Viral During The MEME Reckoning”

The video description notes, “Brandon Morse totally apologizes to CNN and totally not because if he doesn’t he dies.”

“Leave it to CNN to snatch defeat from the jaws of victory.
After President Donald Trump was widely criticized for retweeting an altered video of himself body-slamming CNN during a WrestleMania match, “the most trusted name in news” went on the offensive. Let’s just say that hasn’t gone well…
Not only was CNN criticized by the media for its handling of the incident, it was also ridiculed for taking the video too seriously, including by Trump, himself.
As if that wasn’t enough, reporter Brandon Morse from The Blaze posted a video in which he portrayed the video creator as a hostage, “voluntarily” apologizing to CNN…” 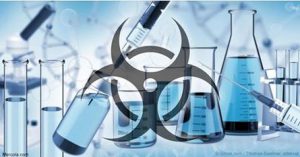 Critical Vaccine Studies: 400 Important Scientific Papers Parents and Pediatricians Need To Be Aware Of” (Video included) 07/10/2017  We’re seeing a great deal more about the dangers of vaccines. Everyone needs to be aware of the true nature of this expanding practice, especially the over-vaccination of the young.

“Vaccines: Are they safe? Are they effective? To help answer those questions is Neil Z. Miller,1 a medical research journalist and director of the Thinktwice Global Vaccine Institute.
Miller has investigated vaccines for three decades and written several books on the subject, including “Vaccines: Are They Really Safe and Effective?,” “Vaccine Safety Manual for Concerned Families and Health Practitioners” and, most recently, “Miller’s Review of Critical Vaccine Studies: 400 Important Scientific Papers Summarized for Parents and Researchers.”
“Miller’s Review,” published in 2016, is a magnificent piece of work. In it, he reviews the concern about vaccine safety and efficacy raised by 400 peer-reviewed published studies. The book doesn’t review studies that support vaccination (almost all of which are funded by the industry and the government, by the way) as those studies are available on the CDC website.
“Miller’s Review” was created in response to the common refrain that “there are no studies showing vaccines are unsafe or ineffective.” 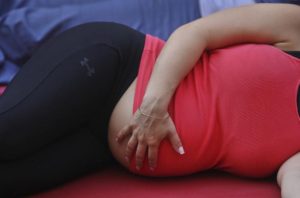 A pregnant woman touches her stomach as people practice yoga on the morning of the summer solstice in New York’s Times Square June 20, 2012

Womb Transplants for Gay, Transgender and Straight Men Who Want to Carry a Child? 07/10/17  Things are getting more and more strange, as everything is being turned on its head. Do these people believe that transplanting a womb will make biological women out of men? There is the entire hormonal system, body structure, etc. that is involved in bearing children. This is a political agenda more than a lifestyle choice or question of science, and having taxpayers bear the cost is over-the-top insanity.

Romans 1:22  Professing themselves to be wise, they became fools,

“Fertility doctors in the U.K. are reportedly working on womb transplant procedures that would allow transgender people born as males, and also other men, to have babies.
Moreover, National Health Service doctors told The Mail on Sunday that taxpayers should fund such transplants, citing “equality enshrined in law.”
Dr. Amel Alghrani of Liverpool University said that such a transplant procedure is a real possibility, and explained that it could help not only transgender women have children, but also gay and straight men who “wanted to experience the joys of carrying a child.”
Alghrani further suggested that such a move would “revolutionize reproduction.”
For straight men who opt to have such a transplant, it would allow “for couples to jointly share the reproductive burdens and joys of pregnancy,” she said.”

Ray Kurzweil Has a Prediction About Linking Our Brains to the Cloud 07/10/17  This is a frightening article about where the scientific elite are taking us. Once everyone is linked to the cloud through their brains, individual thought will be a thing of the past. Could this be what is referred to in Revelation as the near-future of humanity, and be part of why once someone takes the Mark (in whatever form that eventually appears) they no longer can repent?

“Once we eventually figure out how to connect our brains to computers, most thinking will happen in our synthetic computer brains, futurist Ray Kurzweil said on Friday.
In a post for Singularity University’s YouTube channel, Kurzweil, a futurist for Google by day, said that he expects humans will be able to back up our brains to the cloud.
He has predicted that the singularity, the moment when technology enters a cycle of runaway advancement beyond human control, will occur by 2045. This new era will change the human brain. Instead of being stuck with a limited number of biological brain functions, the singularity will allow us to directly experience the benefits of the law of accelerating returns. Eventually, all our thoughts will happen in the computers merged to our brains.
“The most interesting thing will be for your neocortex to extend itself with synthetic neocortex in the cloud,” said Kurzweil. “Ultimately our thinking will be predominated by the synthetic neocortex.”