And I heard the angel of the waters say, Thou art righteous, O Lord, which art, and wast, and shalt be, because thou hast judged thus. (6) For they have shed the blood of saints and prophets, and thou hast given them blood to drink; for they are worthy. 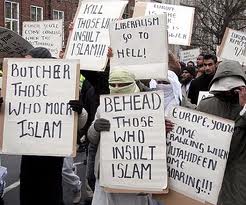 Muslims Advocating Beheading as Found in the Koran

Earlier today I was researching to post material on the blog. I came across a video from Tunisia of Muslims murdering a young man who refused to renounce the Lord Jesus Christ as His Savior. Just yesterday, I posted that many believers living under Islam were going to be martyred. Today I watched the Muslims murder this man. I was so upset that I had to walk away for several hours and then debated whether to post this video. I decided to post it because it is the truth about REAL Islam. The Islam of Muhammad that is now rising all over the world. It is the Islam of the caliphate that is rising in the Arab nations. It is the Islam of the video that I posted yesterday about the Jihad to take Jerusalem and kill the Jews. This is the Islam that, along with trying to kill all the Jews, will also kill our brothers and sisters in the Lord Jesus. I can see a horrific bloodbath of Christians soon coming to Egypt.

Please be warned that this video is graphic and gut wrenching. Do not watch it, if you feel it would upset you. I have posted a few videos of the Muslims murdering people under Sharia law. This is the worst.

Christian Martyr in Tunisia 06/02/12 (Video) The blood of this man cries out for judgment against Islam. This was not a cult of Islam, but this is real Islam that was suppressed and now is rising. Mohammad called for the killing of those apostates that left Islam and this is exactly what his followers are doing. If you do not want to watch the video, I provided a description of what happened.

A young man appears held down by masked men. His head is pulled back, with a knife to his throat. He does not struggle and appears resigned to his fate. Speaking in Arabic, the background speaker, or “narrator,” chants a number of Muslim prayers and supplications, mostly condemning Christianity, which, because of the Trinity, is referred to as a polytheistic faith: “Let Allah be avenged on the polytheist apostate”; “Allah empower your religion, make it victorious against the polytheists”; “Allah, defeat the infidels at the hands of the Muslims,” and “There is no god but Allah and Muhammad is his messenger.”

Then, to cries of “Allahu Akbar!”— Allah is greater!”—the masked man holding the knife to the apostate’s throat begins to slice away, severing the head completely after approximately one minute of graphic knife-carving, as the victim drowns in blood. Finally, the severed head is held aloft to more Islamic slogans of victory.

After watching it and letting my emotions calm down, some issues come into focus. The death of this martyr condemns all who follow Chrislam. This is the Islam of Saudi Arabia, UAE, Iran and the coming Islamic caliphate. This man’s death condemns all who try and blend real Christianity with Islam.

My first reaction was hatred and revenge against those who murdered the man. Then I thought of Stephen and how he was a martyr and his death led to the salvation of the Apostle Paul.

My prayer is: May the death of this man affect those who murdered him, and may they also be drawn to the Lord Jesus as was Paul. May his death win many souls to the Lord Jesus. May his family be comforted by the Holy Spirit.

I have said many times that Islam is about to die a very violent and extremely bloody death. This event will happen when the caliphate is formed and they march on Jerusalem. Allah is about to meet his doom along with all that follow him. This event is not too far into the future.